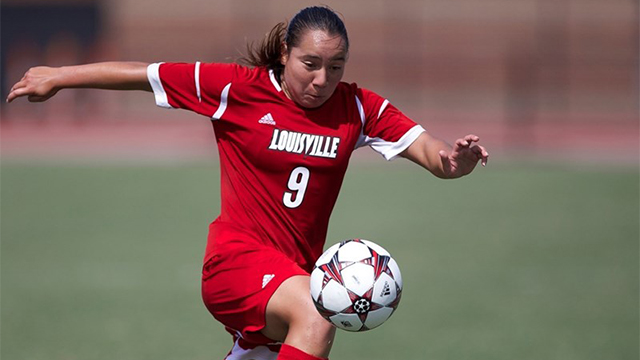 The quarterfinals of the Women’s UEFA Champions League resumes on Friday, August 21 in Spain.

Similar to the men’s tournament, due to the Coronavirus pandemic, the postponed portion of the 2019-20 edition will be finished in a bit more than a week at the same location – the Basque region in Spain. All eyes will be on French powerhouse Lyon, which are seeking their fifth straight title in the competition.

With domestic professional soccer on hold in the United States, several Division I college soccer alumni are set to take the field for the eight remaining clubs still involved in the competition.

So who is still flying the flag in Europe’s top club competition for the NCAA? Here is a look at college soccer alumni in each squad. Games will be broadcast for those that subscribe to CBS All-Access.

Overlooked as a high-scoring professional in Spain, Corral was a dominant player at Louisville from 2012-13. Four seasons at Levante in Spain kicked her career up a gear, as she scored 86 goals in 117 games in the Spanish top flight, before moving to Atletico in 2019. Both Corral and Deyna Castellanos (who signed with Atletico but isn't in the squad) will miss this matchup due to COVID-19 concerns.

There’s a long line of international talent that has come through Florida State and gone on to great things for club and country. An attacking midfielder for the French powerhouse, Cayman’s made 103 appearances for the Belgian national team. She played for the Seminoles during the 2010 and 2011 seasons.

Cook is back in the PSG squad after a loan stint to OL Reign for the NWSL Challenge Cup. The 2017 national champion at Stanford, she was a four-year starter at the Pac-12 power. She’s played just eight times for PSG since joining in 2019.

It’s been quite some time since Taylor was on campus, playing at Oregon State from 2004 through 2007. She recently was transferred from the OL Reign to Lyon after re-signing with the NWSL club at the start of 2020 and is in the squad for the French side.

One of the best players in the Southern Conference over the past decade, the Austrian international was a decorated player at East Tennessee State from 2012-2015. She holds the program record for points (102) and assists (48). She also scored 27 goals while playing DI soccer, before beginning her pro career at Turbine Potsdam in 2016. Earlier this year, she moved to Bayern Munich, thought she’s yet to make an appearance.

The 28-year-old defender from New York was a key player for Boston University from 2010-13. Since graduating in 2013, she’s played for clubs in Germany, the United States and Czech Republic before joining Atletico in 2019.

After a standout four-year career at West Virginia, the Canadian joined PSG in 2017. She’s played 55 times for the club and 83 times for her country.

The heavy underdogs when things kick off in Basque country on Friday, Wojcik and Glasgow City face Wolfsburg, which has twice won the Champions League. Wojcik played at NC State before transferring to VCU, where she graduated in 2016. Prior to joining Glasgow City FC earlier in the year, she was on the books with Sporting Lisbon.

The Danish international spent one season at UTSA back in 2012, where she played the most minutes of anyone on the team as a freshman. Since then she’s played at a pair of clubs in Denmark before moving to Bayern in 2019. She’s also played more than 50 times for country.

Born and raised in Chile, Endler first rose to prominence on the international stage at the 2008 Under-20 World Cup, where she started in goal for her home country that hosted the tournament. She played at South Florida in 2012 and 2013.

The Dutch defender played at Alabama from 2012-2014, where she was SEC Freshman of the Year in 2012 and set a school record for most assists in 2014 with 10 on the season. She recently signed with Atletico Madrid after spending

The second of three American additions in 2020, Freda joined Glasgow on loan from Apollon Ladies in Cyprus. A native of New Jersey, Freda scored 63 goals in 75 games from 2011-2014 at Winthrop. After playing at Merilappi United in Finland back in 2015, and in the United Women’s Soccer League the following year, she latched on to Apollon Ladies in Cyrus. There, she’s scored 224 goals since 2017 in Cyprus. Friday’s game against Wolfsburg is a huge chance for her to make an impression against higher level opposition.

One of the top defenders in the world, Bronze spent the bulk of her career before joining Lyon in 2017. That, and a one-season stint at North Carolina in 2009, where she helped the Tar Heels win the College Cup. Bronze is set to head back to Manchester City at the end of the tournament.

Growing up in California, Cricione joined UCLA back in 2003, before transferring to Boston College for the final two years of her Division I career in 2005 and 2006. Since then, she’s been on a winding journey primarily as a backup goalkeeper for clubs in Sweden, Italy, Holland and France. Back in the summer of 2019, she signed with PSG and is currently in the squad for Champions League.

Another new addition to Glasgow, Wyne’s been on an impressive journey of her own after playing at New Mexico from 2008-2011. Stops in Finland, Iceland, Cyprus and England preceded her move to Glasgow City this year.

The longtime Canadian national team central defender joined PSG after her senior season in 2016, and has made 40 appearances. She’ll look to capture another UEFA Champions League winner’s medal.