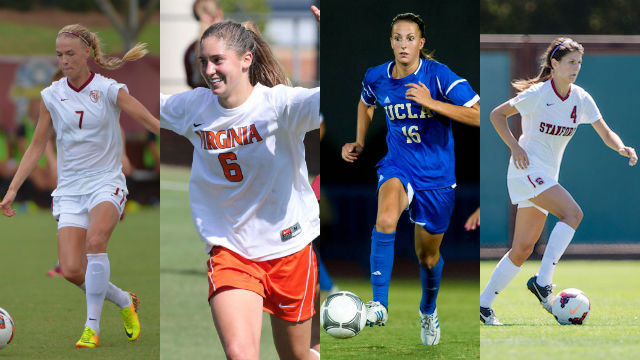 The spring season is just about over for most Division I programs, as summer preparations begin, and players flock home or to various corners of the country to try and stay close to peak fitness.

But based upon returning players, recruiting class additions and other considerations, here’s an early look at how the women’s Division I top 10 might look in the fall:

It’s impossible to bump the Bruins off the top spot. Jenna Richmond was the only main contributor lost to graduation, and a slew of rising seniors will lead the team’s title defense in the fall.

Last year’s runners up lose two big pieces in Kassey Kallman and Kelsey Wys in goal, though the transfer of Cheyna Williams and the return of Dagny Brynjarsdottir in the attacking midfield slot should make the offense more dangerous.

The Cavaliers put together a masterful season in 2013 on the back of a strong corps of seniors, coming up short in the College Cup. Morgan Brian and Makenzy Doniak return to provide a one-two punch in the attack that will drive them in the fall.

The No. 1 recruiting class in the country – which includes U.S. U20 WNT stalwart Andi Sullivan – boosts the Cardinal up to this spot. They lost influential attacker Courtney Verloo, but return a slew of key contributors like Chioma Ubogagu, Laura Liedle, Maddie Bauer and Jane Campbell.

Postseason success continues to prove elusive for Florida, which lost against Duke in the tournament. But the team returns a strong class of fourth year players, including Havana Solaun and Karina Gutsche, not to mention the presence of a pair of talented freshmen in Savannah Jordan and Pam Begic.

Another SEC program that will have a banner crop of seniors to lean on – including Meghan Streight, Jordan Day, Kelley Monogue, Annie Kunz and Shea Groom – the Aggies added very talented freshmen already this spring, with Mikaela Harvey and Haley Pounds joining up already, meaning they’ll be ready to hit the ground running in the fall.

It’s going to be a massive test for the Tar Heel dynasty this fall, with the departures of Kealia Ohai, Megan Brigman, Kelly McFarland and superstar Crystal Dunn, to name a few. There are blue chip prospects there to shoulder the load, but they’ll need to step up in a big way in order to keep North Carolina in the top 10.

A good portion of last year’s College Cup semifinalists are back for 2014, though replacing Dayle Colpitts in goal is a big ask, while the speed and athleticism of Jazmine Reeves was a big success. Chugger Adair looks poised and ready to keep the Hokies in contention, however.

Losing a great goal scorer like Maya Hayes is the glaring issue for the Nittany Lions, though the team returns plenty of talent and has a good crop of recruits coming in this fall. Whitney Church, Kori Chapic, Emily Hurd, Raquel Rodriquez Cedeno, Mallory Weber and Brittany Basinger form a strong squad that will be ready to vault PSU back up the national rankings.

A suffocating defense provided the platform for South Carolina’s 2013 success. Goalkeeper Sabrina D'Angelo backstopped that, and she’ll be back to ensure that it continues in the fall. Provided the team can locate enough offense, it’ll be a formidable force once again.