Five keys for UCLA to compete for a title 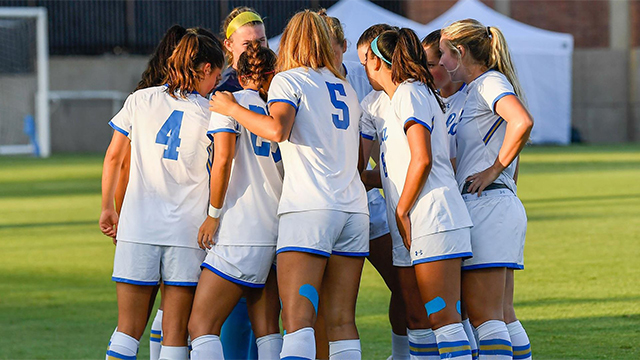 UCLA entered the 2019 season as one of the national title contenders.

Despite last week’s lost against Santa Clara, little has changed. Prior to the loss Bruins picked up wins against Florida and Florida State, and remain poised for a big year.

Here are five keys that could lead them to the promised land.

1. Use the whole field

UCLA plays a 4-3-3 with a midfield triangle that allows Fleming to push forward into the attack. In this formation, space is created on the outside allowing the defensive backs to push forward. At times, however, UCLA is not capitalizing as much as it on the flanks. Instead, they tend to keep the ball in a narrow playing field creating a lot of congestion in the middle of the field.

This issue occurred often in the first half of the Florida game, but in the second half, Jessie Fleming along with Ashley Sanchez connected on the wings, which created several scoring chances. By using as much of the field as they can, their opponents’ defenses are forced to shift, and UCLA can look for open gaps catching their opponents out of position. The Bruins prioritize technique, passing and possession with the ball. Since the Bruins tend to keep the ball on the ground, their opponents can stay behind the ball making it hard for UCLA to break down defensive lines. Florida made it difficult in the first half of last week’s win. Demonstrating that same willingness to switch things up is going to be critical going forward. Especially when an attack has scored eight goals in five games -- which isn’t bad, but for the Bruins to challenge, needs to ramp up a bit more as the season progresses.

After playing in her second World Cup this summer, Jessie Fleming returned to her second home in Westwood. Fleming’s playing further up the field in the No. 10 role. This position allows her to increase her ability to get more touches on the ball and allows her to have much more creative reign. In order for the Bruins to be successful, they need to find Fleming in open space. When she is on the ball, Fleming is able to get her team into a rhythm and find dangerous passes that are an opponent’s nightmare.

4. Do the simple things

The past few games showed some of the Bruin vulnerabilities. UCLA had difficulty distributing the ball to its midfield and front-line. Many of the passes were inaccurate, not crisp, and played in dangerous areas that gave up possession of the ball. UCLA’s backline seemed as if it was rushed to find a pass up the field, and as result turned over the ball because of light defensive pressure. Another vulnerability was visible in the Santa Clara game when the Bruins allowed the Broncos to get dangerous crosses off inside their box. UCLA’s 4-3-3 formation allowed for Santa Clara to capitalize on the open outside midfield space and send in threatening crosses. The Bruins need to get pressure on the ball at a quicker pace to shut down their opponents’ crosses into the box.

UCLA is known to be a great pass and possession team, which is why they are so fantastic to watch, but at some point they try to walk the ball into the net. In the final third, Bruin players will often look for the pass rather than take the shot. Jessie Fleming, Ashley Sanchez, and others have fallen victim to this action, as they attempt to pass the ball off near or around the goal, when they themselves had a better chance of scoring.

The Bruins have an insanely talented front-line of Ashley Sanchez, Mia Fischel and Kali Trevithick. With such a high-class lineup, these players should be confident enough and willing to pull the trigger. At certain times, it absolutely makes sense to find the final pass that sets your teammate up perfectly. However, on Thursday UCLA missed scoring opportunities because they didn’t choose to take the shot.