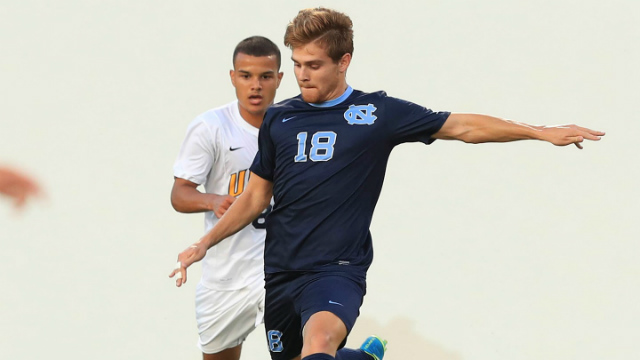 At future MLS Combines, prospects like Alan Winn are going to be rare, if not completely extinct.

That’s not a shot at Winn’s chances of making it to the next level. It’s his background as a U.S. youth international that played four years of college soccer before joining the draft that is already a rare sight.

Whether it’s due to the rampant ties of MLS Academies or USYNT players turning pro at an earlier age, players with Winn’s resume are unlikely to last all four years in school – if they even go there in the first place.

But for Winn, a member of the U.S. Residency program and on the roster for the failed U17 World Cup qualifying effort in 2013, the decision to play four years at North Carolina is one he doesn’t regret for a second.

“I always thought an education was very important,” he told topdrawersoccer.com. “[College soccer] was difficult, kids are bigger, they’re stronger and it’s physically challenging. It definitely prepared me for the [pros] because at that level guys are more physical. Jumping from residency to [the pros] would’ve been more of a challenge than going from college to pro because you’re not ready for that physicality. I’m very grateful for UNC and their culture, the way they brought me in, I’m very blessed with what they did for me.”

A dynamic attacking player that sees himself best fitting out wide in a front three, Winn certainly saved his best for last when it came to his career at UNC. The Solar Soccer Club product scored 11 goals in 17 games, nearly matching his total of 12 in his first three seasons at school. Capable of taking players on one-vs-one, he feels primed and ready to make the jump after developing the last four years at Chapel Hill.

That despite the vibe he sensed during his days with the U.S. youth national team setup.

“It was always a negative thing to go [to college], especially to grow in soccer,” Winn said. “People said ‘don’t do that, it’s not really the route you want to go through’ to become a professional.”

While agents and scouts stake out the sidelines of U.S. U15 BNT camps now, looking to get in early and move young Americans to the pro ranks, Winn said his time at UNC was crucial. He felt like he improved on the little things at UNC, helping to prepare him for this moment. Along with adjusting to the physicality of college soccer, Winn felt like his four years helped him mature both on and off the field. When he started as a freshman, the Texas native struggled to quickly overcome mistakes he made on the field.

His senior year, with MLS scouts following closely, things fell into place for Winn, as he went on a torrid scoring streak. Named a First-Team All-ACC Selection, the forward said that he wanted to make the most out of one last chance at Carolina.

“The sense of urgency, and okay this is it, you have no more opportunities, that purpose really did it,” Winn said. “That’s not to say I had poor seasons my freshmen through junior years, but I think that finishing in the final third and getting that one last pass right it caught on to me my senior year. The focus into the final third really clicked my senior year.”

Heading into this week’s combine and draft, Winn is not the lone veteran of the 2013 U17 World Cup qualifying squad that hopes to hear his name called on draft day. Christopher Lema (Georgetown), Paul Christensen (Portland) and Jefferson Caldwell (Virginia) will both be competing at the combine. Corey Baird (Stanford) signed a Homegrown deal with Real Salt Lake. Two other players could return to college this fall (Peter Schropp and Sebastian Elney).

No matter what’s happened in the past, Winn is primed to make the most of the upcoming experience. After speaking to former Tar Heel teammates about what to expect, he’s eager to jump into it.

“My mindset is to really have fun with it,” Winn said about the combine. “Most guys, it’s nerve-wracking and you have the sense that this is the big stage where you have all the MLS coaches, all these other staff members came in, you play these games and they watch you. You have that in your mind, but at the same time not many kids get this opportunity [so I want to] enjoy it, I want to meet some other guys there, get to meet the coaching staffs because at the end of the day, these are all relationships, these are the guys you are going to talk to if you end up getting picked by these teams. You want to know how they are, because if you don’t know how they are, then you’re not going to have the best first year. I’m excited just to meet everyone there, to get to know people and for people to get to know me personally. I think it will be a fun experience.”

A good combine could certainly nudge Winn up the draft charts. After getting into MLS over the past few years, he finds himself pulled towards California or one of the East Coast powers.

But ultimately, it’s about putting his best foot forward in Florida, and ending up in a position to make a difference in 2018.

“I just want to get picked up by a team, and that way I can just showcase myself and get into it right away,” Winn said. “Throughout my career, I’ve only played with three teams: Solar, the national team and UNC. Once I get on a team, I stick to that team and I’m so passionate about doing great things for the team and trying to [improve].”