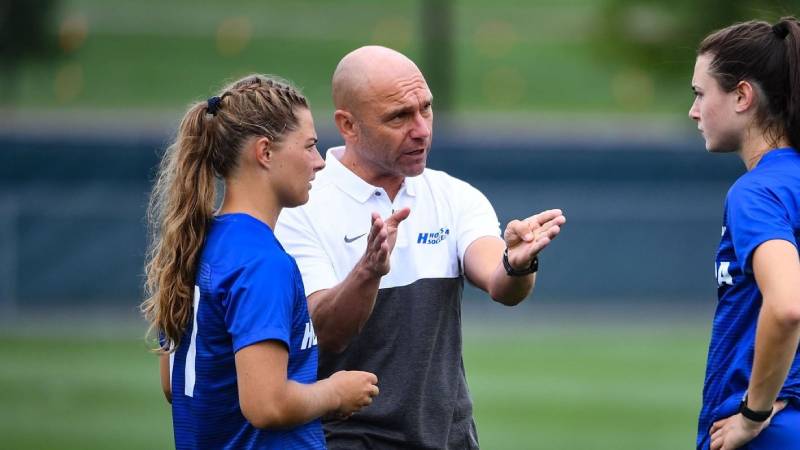 It started largely by accident. The Hofstra men’s soccer coach had a harmless chat with the head coach of Dublin-based Shelbourne FC women’s team. The Irishman noted that a couple of his players might want to play soccer in America.

It was the genesis of a healthy pipeline, with Hofstra leveraging an extensive scouting network to bring in some of the top international talent available. And it’s by tapping into previously unexplored markets that Riddough’s squad has found success.

Hofstra has brought a steady stream of international players to Long Island since the late 1990s. And over the years, its international recruiting has turned into a massive, Euro-wide network, expanding from Ireland to England, Germany to Sweden, and, most recently, Iceland. And although international recruiting is hardly a practice unique to Hofstra, the Pride have perhaps used their connections to greater effect than most teams in the college game.

“I've got loads of different random connections, which somehow ended up working out,” Riddough said.

Anja Suttner was a product of one of those connections. The German center back was supposed to be taking a gap year after logging most of her teenage life in the Bayern Munich women’s system — helping the team win the Frauen-Bundesliga twice. But her friend — and now teammate — Marlene Fries intervened. She’d just committed to play soccer at a school on Long Island. And she wanted Suttner to come along.

“My thought was initially just to come here for like a gap year, just do one year and then go back home,” Suttner said.

She arrived at Hofstra to a very welcoming squad that already had nine internationals, including two Germans. That year, the Pride won their conference and advanced to the second round of the NCAA Tournament. And at the end of the season, Suttner opted to stay for another year, then a third. Now, Suttner will graduate with at least two regular season conference titles and a degree in Exercise Science.

It’s just one way the Hofstra scouting network has worked, with suggestions between friends serving as the driving force for recruitment.

Riddough and his staff have also set themselves up for international success. Riddough has connections to the English soccer scene, including contacts at major clubs. Assistant coaches Gerry Lucey and Ruairi McGuinness also hail from the UK, making it easier to establish a rapport with foreign players — especially those hailing from burgeoning WSL youth setups.

“[Lucey] has been a head coach at Tampa. And he's been in the college game since the mid ‘90s, ” Riddough said. “Between us, we basically have our fingers across Europe.”

At first, the connections were sparse and sometimes ran dry. So, Riddough found himself scouring the internet, scrolling through squads provided by the Irish and English FA. In the early days, making contact was difficult.

“They never had contact info, so I had to find out what club they were at and see if I knew anybody at the club to get an email or even a phone number,” Riddough said.

As their network expanded, the number of hours they spent scrolling through spreadsheets decreased. Hofstra’s staff could now email coaches or alumni, asking for names or teams to check out. Then, Riddough would chat with his own squad to see what they might know about the player or team. If the feedback was positive, he might have another player to develop.

“It's getting more difficult”

These days, recruiting agencies have lodged themselves into the process, working with European players to assist in foreign placement. It’s complicated the process for Riddough.

“Twenty years ago, when I went to Dublin, the Irish kids had no clue what Hofstra or Clemson or UNC was,” Riddough said. “Now they're a bit more aware, and a bit more understanding of their own value as well.”

The key in recent years, then, has been to establish relationships with recruiting agencies and ensure that Hofstra remains on the radar for those overseas.

Riddough and Jon Maloney first chatted in 2015. Riddough had kept a watchful eye on three players signed with Maloney’s agency, SRUSA. Among them was eventual All-American and NWSL draftee Lucy Shepherd. The two connected and Riddough flew over to take in a showcase. He liked what he saw, and after a few conversations he brought Shepherd over to the US — developing the English international into one of the best players in college soccer.

The relationship between Maloney and Riddough has continued, with Riddough routinely reaching out to see if Maloney has any prized recruits. That happened this spring when Riddough realized he was short of an attacking player. Maloney put him in touch with Millie Davis, a Manchester City product who’d just lost a year due to a serious hip injury. Once a part of a Champions League squad, the midfielder realized the American college system might better suit her future.

“Long-term, I'll need a backup plan,” Davis said. “Playing football and doing the university route would be the best option for me.”

That she had family on Long Island and had played with Hofstra’s Amy Meadows only sweetened the deal. She was a late addition — her recruitment wasn’t sealed until May 2022 — but she’s settled in well, making seven appearances and working her way back to full fitness.

Suttner’s German soccer education was rigid. A solid center back, she was told to always keep the ball moving, look for passes and try to link play. If passing lanes were closed, she was instructed to work the ball back to the goalkeeper. She was under strict instructions to never dribble and never just kick the ball down the pitch.

So, when Riddough and his staff encouraged her to carry the ball forward or look for a long pass, she was confused.

“That's the complete opposite of what I've been told for, like, 19 years,” Suttner said.

Distribution was just one point of adaptation for Suttner. Continental European matches are slower and possession based — with an emphasis on team quality rather than individual excellence. American soccer, meanwhile, is frantic. It also tends to be played in far warmer weather. Even the best of European talents often struggle to hit top form in their first few weeks across the pond.

“I was talking to the new freshmen that we have on the team, they say the same things, like ‘Oh my god, I'm so out of shape,’” Suttner said.

But a very special type of player can emerge from those difficulties. The Pride learned that in the early 2000s: As their first wave of international talent adapted to the American game, the results started to come.

In 1997 — a year after bringing in their first internationals — the Pride notched its first ever winning record in conference play. By the mid 2000s, with Riddough at the helm, it was routinely competing for conference championships. In 2007, Hofstra won its first NCAA Tournament game in program history.

Those teams were increasingly European, enlisting talent from across the continent. First was Irish midfielder Elaine O’Connor, who tallied 22 career assists from 1999-2003. She was followed by Marie Curtin, Diane Caldwell and Edel Malone — all future Republic of Ireland internationals. Then, the English contingent came, highlighted by Leah Galton, Shepherd, and, most recently, Lucy Porter.

There has been a supporting cast represented by other nations, too. Suttner is one of a number of successful German players, and Riddough has also pulled from Denmark, Norway and Sweden. All have gone through the same experience, needing some time to adjust to the game. But once they settle in, the blend of technical quality and adapted athleticism makes them top college players.

Most recently, Hofstra has looked to Iceland. An agency there had been pushing some of its players for a while, but the Pride’s coaching staff were reluctant. But when a handful of Icelandic talents found success at schools such as Clemson, Hofstra took notice.

It sent Lucey to a showcase in Iceland, where he identified two additions to the squad. And in one of them, the Pride might have found its next star: freshman Thorhildur Thorhallsdottir leads the team with six goals and four assists through her first seven games.

“The batch of Icelandic kids this year, they appear to be talented,” Riddough said.

The game winning goal in Hofstra’s season opener was an international affair. An Icelandic player swung a corner into the box. It was met at the back post by a Swede and turned in by a Norwegian. Six international students started that game and three more came off the bench.

“Whenever you're on the field, it doesn't matter what language you speak, because you're just part of one team,” Suttner said.

It’s been 25 years since the Long Island school started tapping into the global recruiting market. The college soccer scene has admittedly caught up, with foreign talent becoming the norm. Still, Hofstra has managed to bring in the right players, utilizing connections old and new to identify and develop talent. And with such a large network — buoyed by coaches who understand the European game — the Pride just might maintain their competitive advantage.