Key players in the tourney's first round 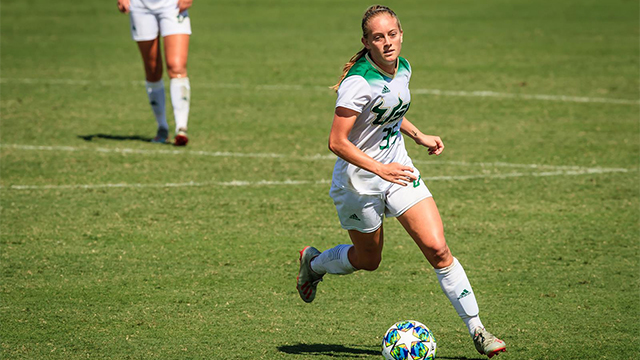 A leading video analysis provider, InStat digs into the numbers behind the success of players on the field.

The first round of the women’s Division I NCAA tournament takes place in North Carolina on Tuesday and Wednesday this week.

Who are the key players to know for each matchup? In order to offer a statistical breakdown for every team competing in a first-round game, we’ve gone to InStat, which uses a variety of statistical measures to assess a player’s performance. Each player below reprents the highest-rated player according to the InStat Index, a number based off a player's action within games this spring. Any team not listed doesn’t have its games analyzed by the platform.

The forward is unsurprisingly the top-performing player in games measure by InStat. She scored six goals and added three assists as measured by the platform. Nasello’s out-performed her Expected Goals mark of 3.1 by almost double.

A creative force for Central Connecticut, McLaughlin led her team in chances created (10) and completed 78% of her pass attempts.

It’s no surprise to see Beckman as the highest-performing player for the Pioneers. She created an eye-popping 33 chances in 15 games, good for nine assists on the year.

InStat tends to skew towards offensive players, so it’s perhaps a bit of a surprise that Roelfsema leads the Owls. She won challenges at a remarkable rate, 77% of 207 challenges, both attacking and defensively, she contested in the spring season.

Gaither led the Paladins in chances created (13) and total shots (40). If she’s more efficient against Rice in the first round, the Southern Conference side will like its chances.

A dream run in the Big Ten tournament propelled the Hawkeyes into the tournament. Like Gaither, she led Iowa in chances created (13), key passes (20) and total shots (37) – though she hasn’t scored a goal recorded by InStat.

Champions of the Big South have been buoyed by Peabody’s attacking initiative down the left flank. A left back, her 19 chances created and 20 key passes are both team highs. By InStat’s measure, she’s scored just one from 14 chances of her own.

Only seven of the nine matches Navy played between the fall and spring are logged. McCaleb’s ability to win challenges pushed her into the top spot, as she won 77% of 61 attempts.

The team’s leading chance-creator (20), Edwards just edges the top scorer, Gwen Maly. Both will be critical as the Mountain West champs take on Navy in the first round.

Just edging teammate Haleigh Stackpole, Foster finished five of 25 chances between the fall and spring seasons, and finished tied with Stackpole for key passes (19). She likes to play off the back shoulder of the defender, as she’s been flagged offside 10 times.

MAC champs all had Cox, Kennedy White and Katie Cox near the top. Cox led the team in shots (32), getting 14 on target. She finished just one goal from 13 chances; another player that can really help her team’s chances of a win if she’s efficient.

The transfer addition from Division II led the Buffaloes in chances created (12) and key passes (15) in games analyzed. She was third-most on the team in pass attempts (546), completing them at a 71% rate.

Playing 21 games across the fall and the spring, McPartlan finished just ahead of teammate Olivia Wilkes and Danielle Fuentes. McPartlan’s team-high 11 goals is the driver here, not to mention a massive shot volume of 100 attempts – 47 of which she got on target.

A great season for the Pac-12 side was propelled by Yates, Ameera Hussen and Olivia Van Der Jagt. Yates just edged the InStat Index on the Huskies with four goals and four assists while also leading the team in key passes and chances created.

The central defender led her side in pass attempts, as the Atlantic Sun champions clearly make an emphasis to build from the back. She also led the team in the percentages of challenges won – 73%.

Two freshmen led the way in the Index for the Scarlet Knights, with Sara Brocious joining Fluchel at the top. Fluchel led Rutgers in tackles from her defensive midfield spot, winning 49% of them.

It’s no surprise to see the English youth international top the charts at the Pac-12 program. Douglas was relatively efficient, scoring eight times in 22 chances and she showed plenty of unselfishness: her 16 chances created are the highest on the team heading into the tournament.

The ball tends to find Fusca on the pitch, as she led the surprise CAA tournament champs with 505 pass attempts. She completed 70% of those, and also created the most chances on her team (5).

The left midfielder provided a bit of everything for the Tigers. She won 65% of 74 dribbles, 67% of 36 tackles, had the second-most key passes on the team (15) and created eight chances.

A big reason for her side’s run in the WAC tournament, Stainbrook’s proven herself as both a finisher and chance creator. Another team that likes to pass the ball, she averaged 52 pass attempts per game and was second on the team with shot attempts (49) and chances created (17).

While Anna Patten deserves a shout out – she was the highest player on the Index, but signed pro after the fall season – Harris slotted into a center back role and was key from a deeper role. Along with chipping in four goals, she won the bulk of her challenges (70%) and her 98 interceptions are second-most on the team.

An outside back that can play on either flank, Hansen’s ability to win defensive challenges is crucial to her standing on InStat. She won 69% of 87 challenges for the Big Sky Champions.

The freshman’s enjoyed a dream season when viewed through the lens of InStat. She’s created a total of 33 chances and won 73% of 88 dribbles between the fall and spring season. Efficiency is key for Virginia’s success in the tournament, as she led the team in shots (59) and converted four of 24 chances.

Parked in the midfield for the OVC champs, Frerker’s contested a whopping 272 challenges, most on the team. She won 51% of them.

A focal point of Penn State’s dominant offense in the Big Ten, Coffey attempted 905 passes during the spring season, with an 82% completion rate. She finished in a very efficient manner as well, converting six of 11 chances.

Only six of their games made it onto the platform, with Ilela just leading the pack for the SWAC champs. She fired off 20 shots in those games, scoring three goals on just 0.73 xG.

As the team’s leading chance-creator, Fischer’s importance to her team’s shot at a couple of tournament wins is obvious. She looks to take on opposing defenders, by far leading the team in dribbles with 118 (with a success rate of 56%.

Like other attack-minded players Gotesson’s Index rating is driven by chance creation. She led the team with 16 chances, despite having only two assists in nine games; Gotesson’s 21 key passes were also far and away the most on her team. Being clinical in front of goal in the first round could give her side a chance of an upset, as she scored just one goals from nine chances in the season.