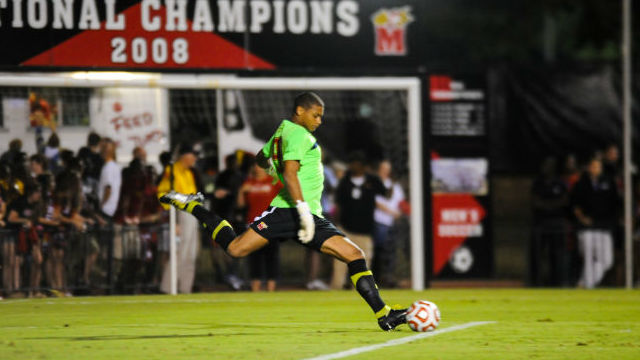 Maryland sophomore goalkeeper Zackary Steffen will forgo his final two seasons at Maryland to sign with SC Freiburg of the Bundesliga, the top division in Germany, announced Friday.

Steffen spent two seasons in College Park, leading Maryland to a pair of conference tournament titles in addition to two regular season crowns while playing every minute of every match for the Terps. He was named Defensive Most Valuable Player at the 2013 College Cup in Philadelphia and garnered top defensive honors in this season’s Big Ten Championship in College Park. The Downingtown, Pa., native is widely regarded as one of the best prospects in the US youth soccer system.

“This is a tremendous opportunity for Zack and we could not be more proud of him,” head coach Sasho Cirovski said. “Zack is going to have a long and prosperous soccer career and we feel fortunate to have had the opportunity to help Zack in his growth both as a player and as a person. On behalf of all of Terp Nation, we wish Zack nothing but the absolute best.”

“My time at Maryland has been nothing short of spectacular,” Steffen said. “I want to thank my coaches and my teammates for an amazing two years in College Park. While at Maryland, I’ve had a chance to develop both on the field and off and I am excited to take the next step in my soccer career. I’d also like to thank the fans – the best in all of college soccer – for their incredible support.”

Steffen is the first Terrapin to head overseas since Robbie Rogers did so in 2005, signing with Heerenveen, a top level club in the Netherlands. Other Maryland standouts to sign internationally immediately following their time at Maryland include Taylor Twellman (1860 Munich) and Philip Salyer (Werder Bremen).