GOLETA, Calif. – When UC Santa Barbara and UCLA met on September 24, 2010 at Harder Stadium, 15,896 people came to see them play – an NCAA record for a regular season soccer game.

The official attendance called it 15,896, but it was likely more. The Santa Barbara Fire Marshal turned people away from the gates during the late stages of the first half in fear of overfilling the 17,000-seat venue.

The sea of Blue and Gold shirts and scarves, the rain of tortillas, and the constant barrage of commentary hurled out by the Gaucho Locos, the group of supporters for UCSB athletics, at opposing players definitely leaves an impression on the visiting team.

“It is crazy,” UCLA senior midfielder Ryan Hollingshead told TopDrawerSoccer.com over the phone earlier this week. “Battling the fans like that is not something we deal with every week, but we are excited about playing in front of that many people.” 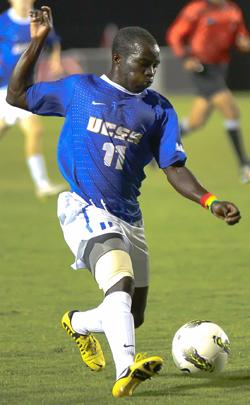 Hollingshead is one of eight current Bruins who played in that game two years ago.

“You don’t know what to expect going in there as a freshman,” UCLA defender Joe Sofia, another returner from that game, told TopDrawerSoccer.com. “This time around, we are expecting a large number of fans. It is a really exciting feeling.”

UCSB won that meeting in 2010 by a 2-0 score behind goals from Danny Barrera and David Opoku, both of whom are long gone from the Gauchos program. And while UCLA returns eight from the game, the home team only returns four players: Fifi Baiden, Nic Ryan, Machael David, and Peter McGlynn.

“Having that many fans is a huge confidence boost,” Baiden told TopDrawerSoccer.com after practice on Wednesday. “Obviously, I was not expecting that type of crowd. I think the crowd played a huge part [in the result].”

UCSB head coach Tim Vom Steeg is not anticipating this year’s attendance to come close to the number from two years ago.

“It sort of depends on what move-in looks like this weekend,” Vom Steeg told TopDrawerSoccer.com.

In 2010, all of the freshmen had already moved in prior to the game. But this year, the classes do not start until Wednesday so the turnout from the students may not reach the same level.

“It’ll be a very late arriving crowd because half of the students won’t realize kick off is at six instead of [the normal] seven. But again, we should have 3,000-4,000 students that come out plus the community and it will be more than any other college game this year.”

“We get so excited for games like that,” Hollingshead added. “That is why we play college soccer. This is as good as it gets.”

The new top team in the nation, Maryland (5-0-1), plays host to Virginia Tech (3-2-1) on Friday in its lone goal this week. The Terps have won their last four games by a combined score of 16-3. The ACC favorites are rolling offensively and find themselves in second place in the nation in scoring offense with an average of 3.50 goals per game.

In the Northeast, two undefeated teams meet when #2 Connecticut (5-0-1) hosts St. John’s (5-0-3) on Saturday. UCONN goalkeeper Andre Blake picked up this season right where he left off last year. Blake has only let in two goals so far this year. St. John’s has a fairly impressive defense of its own, which should make this a rather tight affair with limited opportunities.

The defending national champions have struggled recently with a draw and a loss in their last two games, but the #3 North Carolina (4-1-1) Tar Heels are looking to bounce back on Friday against Virginia (4-2-1). Fox Soccer Channel is broadcasting this ACC clash where UVA striker Will Bates will face off against FC Dallas Academy prized prospect Boyd Okwuonu.

Akron (4-1-2) has not won on the road yet this year. That statistic may be misleading for the #4 Zips with only two road games so far, but the opening conference game against Bowling Green (2-3-2) this weekend should provide a perfect opportunity for Caleb Porter’s squad to pick up its first road victory.

The Mustangs of SMU (4-2-1) are suddenly back in the thick of things after a slow start to the season. SMU, which began the year 0-2-1, is using the play of the defense and goalkeeper Jaime Ibarra to right the ship.

Can they keep it up against CSU Bakersfield on Thursday? The dynamic Roadrunners attack led by Gyasi Zardes will be difficult to stop.

Oregon State forward Khiry Shelton is expected to return from an ankle injury this week. With Wisconsin-Green Bay and UC Irvine on the schedule, the Beavers will need their star sophomore at full fitness for the games.

Speaking of Cornell, striker Daniel Haber is leading the nation in points per game. The Canadian has seven goals and two assists in five games.