UC Riverside moved to 7-0-0 on the season, CSU Bakersfield’s Gyasi Zardes returned to the field, and New Mexico scored with only seconds left on the clock to beat UC Irvine, but the main story of the weekend was the goalfest in Dallas Texas on Saturday.

A Dozen in a Game

Former Akron striker Akeil Barrett put his name in the record books on Saturday in Tulsa’s 7-5 win over Oakland (3-3-0). The Jamaican scored three goals in four minutes and 58 seconds for his new team to claim the fourth fastest hat trick in Division I men’s soccer history. 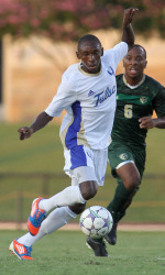 Barrett’s offense explosion came five minutes into the second half, as Tulsa (4-3-0) erased a 3-2 deficit with five second-half goals.

"This is one of the craziest games I've been a part of,” Oakland head coach Eric Pogue said. “It was a back-and-forth game that got away from us for a 10 minute stretch to open the second half and I take responsibility as a coach for that, because I made a few tactical and personnel changes at half that didn't work out.”

From the other bench, the Hurricane head coach lamented the five goals conceded by his team.

"We started out playing well and carried much of the play, but they caught us on two counter-attack goals to take a 2-0 lead," Tulsa head coach Tom McIntosh said. "We gave away a couple of bad goals, and then their third goal was scored when the officials called a hand ball in the box for a PK. We were playing well, but we were down 3-1."

After only scoring 22 goals last season, Tulsa has already notched 18 this year prior to even the start of conference play. It has been all the newcomers who have produced the tallies to start the year.

Los Angeles Galaxy Academy product Gyasi Zardes returned to the field on Friday for CSU Bakersfield after sitting out the previous couple of games with an injury. He made his presence known almost immediately with a goal and an assist in the opening 28 minutes.

CSU Bakersfield now faces a difficult stretch with six of the next nine games on the road. The road trip starts with a game in Dallas on Thursday against SMU (4-2-1).

The Mustangs have won four in a row including a pair of a 1-0 wins last weekend against Oakland and UC Davis. Junior keeper Jamie Ibarra was named the MVP of the tournament. Ibarra and sophomore center back Aaron Simmons will have their hands full with a healthy Zardes heading their way.

New High for the Highlanders

UC Riverside (7-0-0) is the last team based west of the Mississippi to claim a perfect record this year. Junior Gonzalez’s squad beat North Florida and Nebraska Omaha(m) last weekend with a pair of shut out victories, 5-0 and 1-0 respectively.

The Highlanders program has been on the way up with Gonzalez in charge and look to be heading quickly toward a new plateau. The previous program record for wins in a season is nine, which Riverside should easily surpass this season.

Riverside’s success has come with a balanced roster. Only two players have started every game, junior Aaron Long and freshman goalkeeper Ashkan Khosravi. Overall, 26 players have already made an appearance this season, which includes a number of freshmen beside Khosravi.

Khosravi and the rest of the Highlanders return to the field on Sunday for a game against CSU Bakersfield.

Carson Baldinger scored the game-winning-goal with 63 seconds left in double overtime on Sunday in New Mexico’s 2-1 victory over UC Irvine in what could best be described as poetic justice.

The Anteaters equalized with three seconds left in regulation to send the game into overtime.

The Lobos stole all the points and the tournament title thanks to Baldinger’s beautiful snap header off a corner kick by freshman and Vancouver Whitecaps Academy product Ben McKendry.

U.S. U20 Men’s National Team winger James Rogers scored the other goal in the game for the Lobos. Rogers has two goals and one assist in three games this season. The spry attacker has added another lethal weapon to an already stacked New Mexico attack.