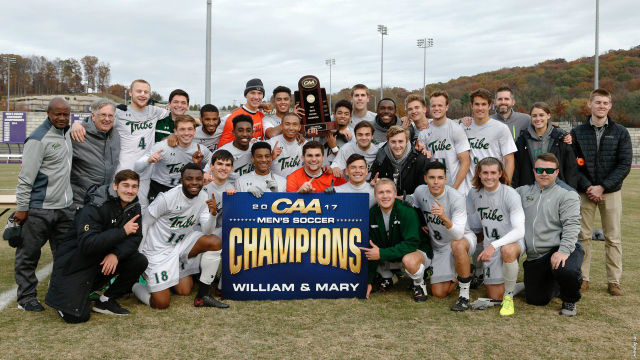 It was a result not without controversy. In the 49th minute, Xavier took the lead from a Matt Vasquenza penalty kick, when Foster McCune handled a goal-bound shotl onto the bar. However, the freshman defender was spared a red card, leaving the Hoyas with 11 players on the field.

McCabe setup Derek Dodson for the equalizer, which eventually pushed the game into overtime, setting the stage for the senior's heroics.

Despite playing more than 60 minutes with a man advantage, Virginia came up short against Wake Forest, falling on penalty kicks after 110 minutes of scoreless soccer.

Wake defender Logan Gdula picked up a second yellow card in the 43rd minute when he pulled Edward Opoku to the turf on a counter attack. Gdula earned his first caution when he fouled Raheem Taylor-Parkes in the fifth minute to prevent getting hit on the break.

The Demon Deacons showed their quality despite playing down a man, outshooting the Cavaliers by a 7-1 mark in the second half.

In the shootout, things got off to a dicey start when Wake Forest missed its first two takes. But sophomore goalkeeper Andreu Cases Mundet made a couple of saves, and the Demon Deacons came back to win it 4-3.

Two games after a four-goal effort, junior Antonio Bustamante continued to peak at the right time of the season for William & Mary.

The D.C. United Academy product scored a hat trick, leading the Tribe to a 4-2 win against UNC Wilmington to clinch the team a spot in the NCAA Tournament.

With the score tied at 1-1 in the second half, Bustamante scored all three of his goals in 12 minutes, getting on the board in the 65th and rounding out his hat trick in the 77th minute.

UNCW grabbed a consolation with four seconds left in the game, but that was a tiny bump in the Tribe's celebration at the final whistle.

78' | This Just In: Antonio Bustamante is good at soccer. This completes his second hat trick of the tournament! Tribe up 4-1. pic.twitter.com/LDDFxmSqEU

Forced to play away from home in a MAC tournament for the first time in several years, Akron got revenge by defeating Western Michigan by a 3-1 score.

The two teams exchanged first half goals, as senior forward Stuart Holthusen opened the scoring from a header, which was canceled out by WMU's Ben Thornton.

Akron pulled away with second half strikes from Sam Gainford and Manuel Cordeiro to secure the crown.