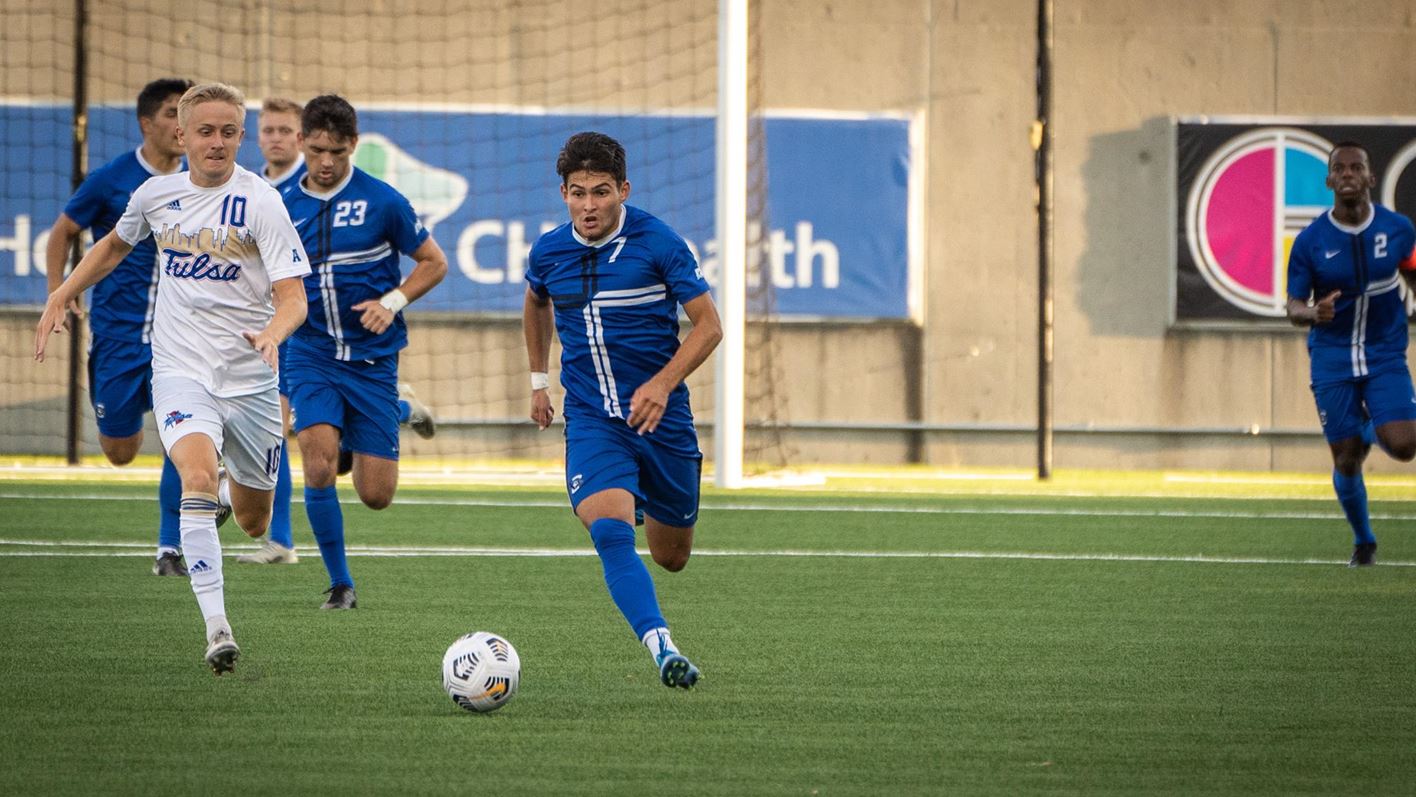 The first round of the men’s Division I tournament is wrapped, with round two on the docket for this weekend. The 16 games should provide plenty of quality and action on Sunday.

After traveling to Charlotte and coming away with a 1-0 win against the Conference USA side, Georgia State will seek to do the same. The Hoyas are a relentless side, even without being an overwhelming offense. Dante Polvara and Sean Zawadzki lock down the midfield for the Hoyas, the story as ever, while Stefan Stojanovic showed he can score big goals at the right times in the Big East final. The conference showed its quality on Thursday, as all four teams advanced, and the Hoyas will look to continue that.

Despite struggling down the stretch, Bowling Green showed up and put forth a stellar effort to beat Louisville 1-0 at their place. Another relatively short road trip awaits in the second road, looking to replicate that performance in Bloomington. Indiana has flashed signs of being a contender, and now is where it counts. Sam Sarver and Victor Bezerra are two of the big offensive pieces, while Roman Celetano is a difference-maker in goal. Defender Jake Erlandson is one of the top at his position in the college game and will need to be sharp as BG hunt another upset.

Thursday night was the first NCAA tournament win for UCLA since 2016, a first-round win. Are the Bruins back? Hopping on a plane for Durham is a big test in a tight turnaround, especially after needing overtime to beat UC Santa Barbara. Thorleifur Ulfarsson and Shakur Mohammed are a dynamic duo that leads the line for the Blue Devils, and UCLA needs to find a way to slow them down. If this becomes a high-scoring game, Jose Contell, Kevin Diaz, Tommy Silva and Tucker Lepley are candidates to step up and get goals.

Back to the Big East note: Providence gets perhaps the biggest chance to show the chops of the conference against the defending champs. Pedro Dolabella’s goals have been a big part of Marshall’s success this fall, even if they came up short in the CUSA regular season and conference tournaments. Providence has talent, like Brendan McSorley and Luis Garcia, to come up in big moments and propel Providence to the upset.

The Hokies beat Campbell by a 2-1 score at home, and now head north to Morgantown and a matchup with West Virginia. If the Mountaineers can find enough offense, a deep run is likely, as they are difficult to beat and score upon. Luke McCormick is a candidate, though he’s not the only one, as Ciro Courlot Jaeggi and Yoran Popovic are options. Forward Jacob Labovitz is Tech’s leading scorer, though Conor Pugh, Kyle McDowell and Pol Monells have shown the ability to either finish or create chances.

After a narrow advancement at home, North Carolina heads north looking to best the America East champs. It’ll be a fascinating clash between the ACC side that tries to control games but is limited in its chance-creation. New Hampshire is chasing a big win against marquee opponents; Tola Showunmi leads the charge offensively with 10 goals this season. Another low-scoring game appears likeliest here.

A sensational goal from Assane Ben Fall late in the second half knocked Maryland out of the tournament, as LIU was able to sit in and limit Terps chances in front of goal. They’ll head to Saint Louis and look to do the same against an offense led by Simon Becher and John Klein. Emil Jaaskelainen is the other attacking talent to watch for the NEC champs, eyeing a second straight road upset.

Dominant at home with a record of 9-1, the Panthers will be a tough out for NIU. They’ll be the favorites for this one, even if Veljko Petkovic remains absent (he last played on October 29). Valentin Noel has stepped up and started finding the back of the net as the season progressed, while Bertin Jacquesson remains crucial out wide. Finding a way to stop Nick Markanich is crucial, although Diego Maynez scored two times in the first 14 minutes in the first-round win against Oakland.

A road-tested Villanova side heads to Indiana with another eye on an upset after beating Vermont by a 1-0 score on Thursday. The Wildcats are great at sitting in and being difficult to break down and will look to keep this one at 0-0 for a long time. Shutting down Jack Lynn and freshman Matthew Roou are big asks in that department, while looking for Lyam MacKinnon in the final third. The Irish are hot at the moment after winning the ACC tournament and have a record of 9-1-2 in the past 12 games.

An impressive shutout streak will be put to the test by one of the best attacks in the country, as Hofstra travels to State College. After beating Lipscomb by a 4-2 score in the first round, Hofstra’s Matt Vowinkel and Ryan Carmichael are the focus in the offensive third. Seth Kuhn’s ability to score and create will be crucial here, providing the offense can lock down the Pride attack.

FIU’s most recent matchup against an ACC side was a 4-0 loss at home against Clemson. Can they rebound against Wake Forest? The Demon Deacons are talented but young, and needed to come from behind to beat Mercer by a 2-1 score. Kyle Holcomb is the man of the moment, with two more goals and continuing to build his stock for the pros. This one depends on what FIU side shows up, as they bounced back and beat Marshall 4-1 after that loss to Clemson.

The Broncos were extremely efficient with their chances, beat Akron 2-1 in overtime despite being outshot 17-3. They’ll hang around in the Ohio/Kentucky region to battle it out with the tough CUSA side on Sunday. Forward Oladayo Thomas underlined his importance to the team with two assists on Thursday, and he’ll look to stretch the field. Beating a tough defense like Kentucky will be no easy beat, as they Wildcats have one of the best statistical records in the college game. Luke Andrews, Eythor Djorgolfsson and Daniel Evans have all starting scoring down the stretch and UK can hope it continues.

Four wins down the stretch snatched an NCAA tournament spot for the Bluejays, and a moment of magic from Diego Gutierrez propelled Creighton past Missouri State on Thursday. Doing that against at Tulsa won’t be easy, and if Alex Meinhard is back from injury, it will be even tougher. Tulsa won at Creighton earlier this season and will be favorites, even if Meinhard isn’t back.

Another first-round winner decided by a single goal, it was Kengo Ohira’s 24th minute strike that made the difference against Grand Canyon. Doing the same on Sunday at Clemson won’t be easy, but the Tiger offense can go cold. If Clemson can get one or two attacking players on a hot streak, it’s essential to their College Cup shot. Be it Isaiah Reid, Quinn McNeill or Ousmane Sylla – any will do. Denver is difficult to score on, though are not a rampant offense themselves. Ohira’s ability to create magic is going to be one of their best chances of making something happen.

Don’t let UW’s 2-0 win at Portland earlier in the year indicate that the Pac-12 side are overwhelming favorites. Sure, being at home and as the No. 2 seed gives them an edge, though Portland and UW play each other so often that there will be no secrets between each other. The Pilots surged at the end of the season, winning six of the past eight games, including a wild 3-2 win against Seattle. Washington is a relentless side that can score goals from a variety of sources. Alejandro Pereira had a two-goal effort in the first round for Portland, and if he replicates it here, it could pave the way for a Pilot win.

The Red Storm held serve at home on Thursday, edging Princeton by a 1-0 score. Goalkeeper Luka Gavran and the St. John’s defense has the ability to go on the road and blank Oregon State. If Tyrone Mondi or another attacker can score early, it will be tough for a Red Storm offense that can struggle to score at times. Brandon Knapp and Lucas Bartlett are the top scorers on the side, and will need to be huge here to give them a shot.