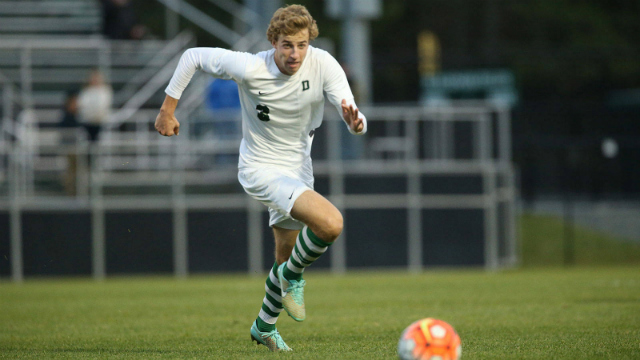 The second round of the men’s Division I tournament is set to continue on Sunday.

MORE: Men's Division I bracket | Pro prospects to know in the second round

Below is a preview and pick for all 16 games.

The winning and shutout streaks continued for the Monarchs at home on Thursday, bottling up NC State in a 2-0 victory. That defensive excellence should give ODU hope, as Indiana is defensively stout but lacks a consistent cutting edge in the final third at times. An early goal for the Monarchs would jolt them to life, whether it’s Brandon Perdue, Max Wilschrey or Niko Klosterhafen. Of course, if IU can open the scoring, good luck. Mason Toye and Griffen Dorsey, both freshmen, are two of the keys for that, though as Wisconsin showed in the Big Ten tournament final, get IU to penalty kicks and all bets are off. Playing at home with a talented team, the Hoosiers should have just enough to get off the mark in the tournament.

Getting the best of Seattle is simple: stop Sergio Rivas. The junior scored and added an assist as SU got the better of local rivals Washington, winning 3-2 in overtime. Making the trek to Akron, Rivas and Alex Roldan are key to their hopes of an upset. While Akron will certainly enjoy the extra few days off, the Zips are still playing their fifth game in 12 days. Manuel Cordeiro’s presence in the middle is going to be critical in halting Roldan and Rivas, while Stuart Holthusen’s goal-scoring form gives Akron hope for a win on Sunday and beyond.

After toppling Maryland on penalty kicks in the first round, Albany’s confidence is going to be high heading into its matchup against Western Michigan. The Broncos are a tough out, winning plenty of low-scoring games this season. Midfielder Brandon Bye’s delivered on several occasions, whether scoring or creating decisive goals. Albany showed plenty of defensive resilience against Maryland, getting outshot 14-4 but keeping things relatively tidy in front of goal. The concern for the Danes is Afonso Pinheiro’s involvement. Playing just 29 minutes as a substitute – likely playing through a late-season injury – Pinherio’s a difference maker and could still leave his mark on this game.

It’s a grudge match for Dartmouth, as they will get the chance for vengeance from a 4-2 loss earlier season on the road against New Hampshire. This time, the Ivy League side is set to play the hosts, and deliver on the potential and promise shown this year. Matt Danilack and Wyatt Omsberg are a senior spine good enough to play somewhere professionally, and freshman Dawson McCartney’s been a difference-maker in his first season in college soccer. German graduate student Robin Schmidt continued to find the back of the net in New Hampshire’s first round win, and his heroics will be needed again versus the favored Big Green side.

As tough of a team to beat as any at home, SMU faces the arduous task of visiting Shaw Field and finding a way to win. A big day from sophomore star Garrett McLaughlin is likely part of any successful recipe, as he has the pace, strength and power to trouble Georgetown’s stingy back line. Senior midfielder Chris Lema pulls the strings in the center of the park, setting the table for Achara, Declan McCabe and Derek Dodson in the final third.

An intriguing test for the ACC side as it makes the trip to East Lansing looking to thwart the Spartans. The two obvious keys for the Hokies sit at opposite ends of the field, whether its goalkeeper Ben Lundgaard or forward Marcelo Acuna. Michigan State’s formidable at the back, as Jimmy Hague is underrated in goal, while Ken Krolicki and Jimmy Fiscus are both experienced. Barring a major mistake or two, goals are going to be few and far between as the two sides look to avoid conceding anything.

The Patriot League champs next stop is Ann Arbor, for a test against a Michigan side that captured the Big Ten regular season title. Midfielder Jared Stroud continued his impressive season for Colgate, as the senior netted in Thursday’s road win against Massachusetts. Cooking up a result against the Wolverines is a much tougher test. Francis Atuahene is injury-prone and inconsistent, though he’s dangerous and lethal enough to torch most college back lines. Mohammed Zakyi and Umar Farouk Osman are the first-year sparks that can turn this game on its head, while Jack Hallahan cleans up to score or create in the space that trio opens up.

Arguably the best second round matchup, No. 16 seed VCU welcomes the Big East regular season champs to Richmond, as both fight to keep the season alive. Back-stopped by Eric Dick, the Bulldogs have the formula to frustrate the Rams, and can punish them for mistakes through Brandon Guhl. Rafael Andrade Santos, Luc Fatton and Francesco Amorisino provide the experience and quality in the final third. VCU’s defensive spine relies on quality freshmen who will need to be consistent in order for VCU to hold serve at home.

Two players will need to be in form in order for Fordham to pull off the upset in Charlottesville: Jannos and Jannik Loebe. The leading offensive producers for the Rams, the Loebe brothers have combined for 14 goals and 12 assists on the year. Virginia’s approach to this game will be fascinating. The ACC side loves to drop deep and kill a game, though considering their talent advantage, could go out and kill this game quickly. Edward Opoku was a bit inconsistent in the ACC final and needs to find his edge in the final third in order for Virginia’s defensive-minded tactics to pay dividends.

After coming through with a win on a short trip to Berkeley, San Francisco now faces a long trip to Louisville where it comes up against a stout Cardinals side. Sean Bowman continues to make this happen in front of goal, and the Dons need another big performance from the Seattle Sounders Academy product to come away with anything here. Defensively solid, USF certainly is capable of frustrating Louisville. With a two-week break heading into this one, that certainly favors the likes of Mo Thiaw and Tim Kubel helping the ACC side to victory at home.

First test up for the No. 1 seed is a visit from Ivy League side Columbia. The Lions have done very well to make it this far, defeating William & Mary on a golden goal Thursday night. Slowing down Wake Forest and its vaunted attack is a challenge that they haven’t faced all season. Aside from its Ivy League game with Dartmouth, Columbia’s highest ranked RPI victory came against Fordham, back on September 4. They drew 1-1 a few days before that with UMass, who are at No. 18. Arthur Bosua’s influence in the final third will be critical, as Columbia will have to aim to smash an early goal and sit back to soak up pressure. Wake Forest enters as favorites, though that label comes with pressure and nerves that one mistake could end a season. The health of Kevin Politz is something to watch, as the ACC Defender of the Year hasn’t played since October 21.

Champions of the Big Ten Tournament moved along with relative ease on Thursday, scouring four times in a 4-1 defeat of UIC. Next up for Wisconsin is a road trip to Notre Dame, where they face a tough yet winnable game against the Irish. If the Badgers have an answer for Jon Gallagher and Jeffrey Farina up front, they have the weapons to do damage going forward. Big Ten Player of the Year Chris Mueller leads the nation in assists, as he now has 17 after adding two more to his haul against UIC. A high-scoring game could potentially be on the cards in South Bend on Sunday.

Thanks to a 1-0 win against Mercer on Thursday, Coastal Carolina has setup a South Carolina clash, as the Chanticleers will make the trip to Clemson for an ACC test. The Tigers handled Coastal with ease in a preseason matchup, defeating them 3-1 back in August. This is obviously a much different test, though getting the ball to Frandtzy Pierrot in dangerous spots is going to be key, something Coastal struggled with at times this season. Clemson is likely to have a bit too much going forward, whether it’s Jason Wright or Diego Campos doing damage in the final third.

A goal 56 seconds into FIU’s first round match against Omaha took the pressure off, as the Panthers were able to soak up attacks the rest of the game before coming away with a 2-0 win. Making the trip up to Durham is next on the list for FIU, as the team’s high-powered offense looks to make in-roads against the ACC side. Duke will be either well rested or rusty after having last played on November 5 in the ACC quarterfinal clash against Clemson. If this one turns into a high-scoring match, it favors the visitors, though Duke’s been very stout defensively for most of the season, and Brian White is more than capable of finding the back of the net to keep pace with FIU.

Unable to break down a stubborn Presbyterian side, senior Julio Moncada rose to the occasion on Thursday, scoring the winning goal in overtime to send UNCW to a rematch with the Tar Heels. Despite UNC slipping up in the ACC Tournament, the hosts will be eager to avenge their early season loss, and have their sights set on a deep tournament run. Midfielder Cameron Lindley is one to watch in this one, as he’ll be an important piece in the middle of the park.

With a win under its belt on Thursday night, Pacific now faces the mammoth task of traveling to Stanford and finding a way to beat the Cardinal. The last game Stanford lost in the NCAA Tournament was a defeat at the hands of UC Irvine on November 23, 2014. Keeping the shackles on Foster Langsdorf is going to be critical for the Tigers, who lost 1-0 to Stanford in a preseason exhibition match in August. Tomas Hilliard-Arce is a formidable foe to best, so this game shapes up to be another low-scoring affair.