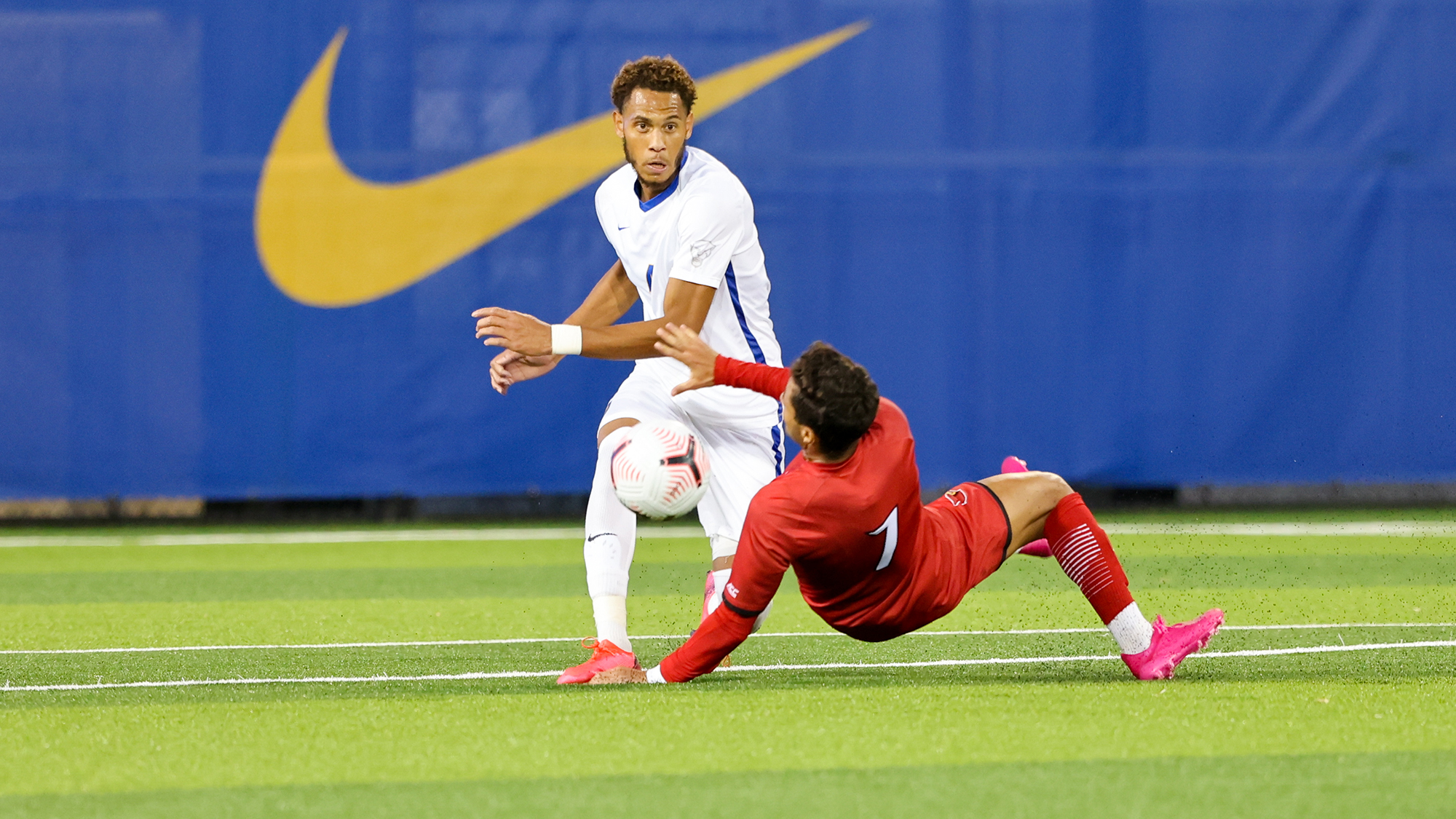 The top four seeded teams in the bracket have the chance to play sides that competed on Thursday, afforded a slight advantage in that regard.

Preview each of the second rounds games below. All games are being played in North Carolina, and kickoff times listed EST.

Head coach Marc Hubbard has done an excellent job at UNH, which heads to a fourth straight NCAA tournament. International players feature significantly and will be key in this matchup against Kentucky, especially Italian midfielder Yannick Bright. After a strong fall performance, with six wins in seven games, Kentucky struggled a bit in the spring with a record of 5-3-2. Marcel Meinzer needs to have a good game for the Wildcats to put them in the frame for a win.

Could the defending champions fall at first time of asking? The Hoyas have lost a slew of their talented seniors, with Rio Hope-Gund, Derek Dodson and Jacob Montes off to the next level. High Point has the attackers to cause trouble in Matthew Myers and Sebastian Chalbaud. A lot of the responsibility will fall on the ability of Dante Polvara to dominate in the midfield and give the Hoyas a platform to advance.

Two strong defenses line up against each other, as the Atlantic 10 champs look to extend their unbeaten season against a talented Marshall team. The result could boil down to what attacking players deliver. Vitor Dias and Jan-Erik Leinhos have come through in the final third for Marshall with two game-winning goals apiece, while Fordham’s Sameer Fathazada has three game winners.

LMU dominated the West Coast Conference, displaying an air-tight defense that conceded just two goals in eight games. Sophomore Noel Caliskan’s ability to control games and score big goals has been crucial in that. It was a good season for Marquette, which enjoyed success both in non-conference and Big East play. Keep an eye on Lukas Sunesson and freshman Beto Soto for the Golden Eagles.

The Terps face a big test against the dominant force from the Missouri Valley. Freshman goalkeeper James Lowell has stepped up and made the most of his chance for Maryland. The Bears will be hungry to prove themselves against a program with such pedigree. Kyle Hiebert anchors the back line, while Nicolo Mulatero leads the attack with seven goals and eight assists.

Despite the fact that UMass didn’t even make it to the Atlantic 10 tournament, they received an at-large bid. Can they hang in there against Penn State? A lack of non-conference games for Penn State makes it hard to know their level, but considering how they pushed Indiana in the Big Ten tournament, they’ll be tough to beat. Freshman Alec Hughes finished as the team leader in goals with seven, and he will need to deliver against a good Penn State defense anchored by goalkeeper Kristopher Shakes.

Looking for a game with goals galore? There’s a chance that this one turns into a back-and-forth, high-scoring clash. Oregon State brings a variety of attacking talent to the field, lead by Player of the Year contender Gloire Amanda. The Hokies will need someone like Jacob Labovitz to step up and score goals, as Tech conceded more goals than they scored across the fall and spring.

After coughing up a two-goal lead in the second half, American held their nerve on penalties to advance for a matchup against the ACC champions. The Tigers have to keep an eye on David Coly, who has scored in five straight games for the Patriot League champions. Goalkeeping duo Jake Agnew and Lorenzo Gordon could be very busy if Clemson’s attack is firing, as Callum Johnson has helped pick up the slack with the departures of Grayson Barber and Kimarni Smith. American will have their hands full, but are a well-coached side that could pull off the upset.

Despite coming up short in the WAC tournament final, GCU earned an at-large bid and make up yet another intriguing matchup. Washington’s been great for most of the season, coming up just short of a Pac-12 title. Dylan Teves ability to score goals from midfielder has been critical, while Charlie Ostrem’s been a crucial chance creator on the left side. Goalkeeper George Tasouris sets the foundation for Schellas Hyndman’s side, while the scoring has been provided by senior Justin Rasmussen and freshman Maximilian Moeller.

Two extremely experienced teams looking to make a big impression this spring square off. Both teams are difficult to score upon, and feature great goalkeepers, with JMU leaning on T.J. Bush and UCF’s Yannik Oettl in great form. Which offensive contributors step up? The Dukes are dangerous from set pieces with the service of Rodrigo Robles and do share the goals: seven players have amassed their 10 goals. Gino Vivi, Yoni Sorokin and Hattabiou Barry have four apiece. UCF haven’t lost a game since February 27, and will look to keep it going.

It’s only fitting that in an NCAA tournament set to take place only in North Carolina, at least one matchup features two programs from the state itself. Expect to see this one be a tight, closely-contested matchup. North Carolina will possess the ball, while Charlotte defends deep and looks to break. Giovanni Montesdesoca is the potential game-breaker for the Tar Heels, while Patrick Hogan guides the defensive effort for Charlotte.

The NEC champions needed overtime, but found a way past Wisconsin-Milwaukee by a 2-1 score. El Mahdi Youssoufi’s late equalizer was crucial, setting the table for his side to eventually win it. A side led by internationals, St. Francis Brooklyn certainly can give IU problems, whether it’s Nicolas Molina or Ramchy Saint Vil. Goalkeeper Roman Celentano is one of the best in the nation, and striker Victor Bezerra leads the line as the Hoosiers continue the quest for a ninth national title.

Playing UNC Greensboro on their home turf, Omaha found a way to advance, pouncing on mistakes and converting set pieces. It’s a formula that Stanford excels at: making the most of scoring chances and defending well. Can the Summit League side match the Cardinal in that regard? It seems a stretch, although Hugo Kametani has shown a knack for scoring goals all season. Doing that against goalkeeper Andrew Thomas, while keeping Zach Ryan quiet, is the challenge.

The Demon Deacons get to host this matchup versus the Chanticleers. The visitors have actually lost two games in a row heading into the tournament, having clinched a spot in the postseason by winning the fall championship. Assuming Garrison Tubbs is fit, he’ll partner with Nico Benalcazar at the back as Wake prepares for the stretch run. Coastal’s Kasper Skraep anchors the team’s back line, which will do their best to make it difficult for Wake Forest to find joy going forward.

It’s been a big breakthrough season for Seton Hall, which faces one of the hottest teams in the spring in Air Force. The Falcons are unbeaten in six straight (five wins) to get to this point. Sophomore Quinn Matulis continues to set the table for the offense. The margins in this one will be small, as Seton Hall look for C.J. Tibbling and J.P. Marin to secure a third-round berth.

Jay Vidovich is on the hunt for another national championship, this time with Pitt. The rebuild he’s accomplished has been nothing short of remarkable, and the Panthers have the talent and are favorites to at least reach the College Cup. Valentin Noel and Veljko Petkovic bring goals from the midfield, while the flank quality of Alexander Dexter and Bertin Jacquesson will be hard for Monmouth to stop. The Hawks won their first NCAA tournament game in program history on Thursday, as their previous triumphs had come on penalties. Sophomore Julian Gomez’s surge has been critical, and he’ll be one of their chances of grabbing the upset.