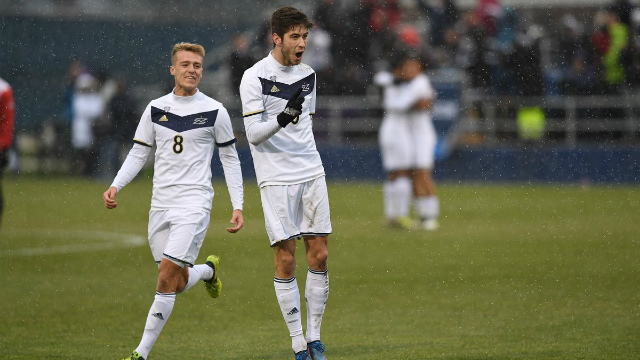 The Division I men’s tournament swings back into action over Thanksgiving weekend, with eight third round games on the docket.

Preview each matchup below.

The opening game of the third round could – and should – have plenty of goals to offer. Both the Zips and Badgers are adept at finding the back of the net. However, Akron does hold the advantage defensively, and hasn’t conceded more than a single goal in a game this season. Sam Gainford and Stuart Holthusen have been fit and in form, which is certainly welcome news for the Zip faithful. On the other side of the ball, Christopher Mueller must have a huge game in order for Wisconsin to come away from Cub Cadet Field with a result.

It didn’t take long for the Demon Deacons to get a significant test, and this Saturday’s clash is set to be another big battle for the No. 1 seed. Butler has the ability to challenge Wake’s offense through Brandon Guhl, while the quality of Eric Dick is sure to be on display in goal. Provided Wake Forest can get a strong performance from someone in the final third, whether it’s Jon Bakero, Omir Fernandez or Ema Twumasi, a win at home shouldn’t be too far out of reach.

Given the team’s result last week, SMU is going to feel extremely confident about another road trip and finding a way to win. The Tar Heels will enter this one as favorites, given Cameron Lindley’s ability to create in the final third. Of course, SMU’s stout defense, led by Jordan Cano, combined with the attacking initiative of Garrett McLaughlin, should keep this a close contest. Senior Alan Winn could be the X-Factor for the Tar Heels, while Jelani Piters continues to find the back of the net at critical junctures.

Can Fordham pull off a second straight win on the road against an ACC foe? It’s not too much of a stretch for the Atlantic 10 side, particular if Jannik or Janos Loebe can help create something in the final third. Duke’s been quiet of late, although they got the goals needed to defeat FIU in the second round. Brian White wasn’t required, and the attention that he’ll receive usually opens up space and opportunities for his teammates.

Losses have been few and far between for the Broncos during the program’s historic season, and the third-round matchup features a chance to avenge a regular season defeat to the Spartans. Forward Ryan Sierakowski was the difference during that October 4 clash, and there’s every reason to believe that the Michigan State forward is going to be crucial once against. Brandon Bye’s ability to make things happen in and around the opposing goal is going to come into play here as WMU looks to pull off the upset.

After progressing through two rounds of the tournament, New Hampshire faces its biggest test to date by a country mile, when it takes on IU in the Round of 16. Provided the Hoosiers can keep finding the back of the net, a trip to the College Cup seems more or less inevitable, given the team’s defensive record. Mason Toye stepped up in the last game, while senior center back Grant Lillard found the back of the net from a set piece. It’s hard to see past Indiana in this clash.

Finding a way to spin off a lengthy winning streak bodes well for any program, and Patriot League side is in rarefied territory after making it to the Third Round. Midfielder Jared Stroud is one of the keys to the team’s ability to create in front of goal, while 6-foot-5 center back Aram Ouligian leads the team with eight goals. Louisville is sure to find some joy in the final third, as Colgate’s conceded 34 times this season. Mo Thiaw’s chances to impress pro scouts is sure to light a fire under him, while Tate Schmitt’s a player that can make things happen. The Cardinals should be able to find a way to advance in this one.

Just keep winning. That’s what Stanford always seems to be able to do in the NCAA tournament the past three years. With a second-round penalty kick triumph against Pacific, the Cardinal now have won its past four penalty kick shootouts and can grind out results in the tournament with little concern for style points. Foster Langsdorf is efficient in front of goal, while Tomas Hilliard-Arce has a strong claim as the nation’s best center back. His matchup against Frantzdy Pierrot is likely to dictate the outcome in this one, as the Coastal Carolina forward will look to get free against Stanford. Melvin Melchor’s hot streak couldn’t have come at a better time, and he’ll look to keep rolling after accruing three goals and two assists in the first two rounds.