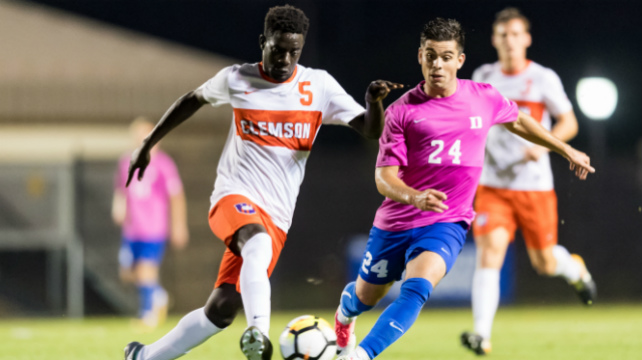 While the regular season winds down in the men’s Division I soccer campaign, conference tournaments are either under way or about to kick off over the next few days.

Here’s an overview of four conference tournaments set to continue or begin this weekend.

The Atlantic 10 quarterfinals begin on Saturday, with the first pair of matchups at GW and Dayton, while VCU and Umass both look to turn regular season success into an automatic bid in the conference tournament. The relatively new format of the knockout competition is welcome (previously, the A10 tournament compressed three games into four days. Rafael Andrade Santos, Luc Fatton and Francesco Amorisino provide the firepower for VCU, which host St. Bonaventure on Sunday after losing to them this past week.

After upsetting Stanford earlier this season, Saint Louis just managed to clinch a spot in the A10 tournament. As the No. 8 seed, the Billikens are on the road for a test against first-place finishers Massachusetts. Freshman Davis Smith has been a huge part of UMass’ turnaround this year, as his 6-foot-6 frame is extremely handy in the grind of the college game.

Wednesday’s mid-week ACC tournament action has whittled down the field to eight teams, with the quartet of high seeds hosting games on Sunday at 1 p.m. ET. To be fair, every single side that remains in the field could end up winning the entire thing. Wake Forest will have its hands full with Marcelo Acuna, as the Costa Rican forward looks to give his MLS draft stock one last push. Wake star Jon Bakero remains the front-runner for Player of the Year honors, and the longer the Demon Deacons play into the 2017 postseason, the more likely that becomes.

Hosting Virginia on Sunday, the clash with Louisville is arguably the top matchup of the quarterfinals. UVA has excelled at times throughout the season, and Edward Opoku is rounding into form at the right juncture. The Cardinals are always tough to beat under Ken Lolla, and seniors like Mo Thiaw and Tim Kubel will have their say as they eye a spot in the semifinals.

The final result of the regular season – a 3-0 win by North Carolina – removes some of the luster from the semifinal in Cary, N.C. Notre Dame is better than that score line indicates, and the Irish bounced back with a 5-0 thrashing of an improved Pittsburgh side in the first round. The one-two punch of Jeffrey Farina and Jon Gallagher needs to be connected in order to thwart the Tar Heels. Despite playing its home schedule at different venues, North Carolina’s had little issue this season. Cameron Lindley’s dominant play this season solidifies the team as a national title contender, while Jelani Pieters has stepped up to provide a goal-scoring outlet when Alan Winn’s missed time due to injury.

Badly in need of a good season in 2017, Duke’s senior class delivered. From Brian White up top to Markus Fjortoft at the back, the experience and veteran savvy of the nine-man group’s been a big part of clinching not just a winning season, but a first round bye in the ACC (and likely NCAA) tournament. Clemson’s arrival to Durham is a chance for revenge as well, as Duke lost 4-1 back on October 13. The Tigers have the makeup to beat anyone in the country with Diego Campos and Jason Wright leading the attack.

An interesting season in the Big Ten culminated in thrilling fashion last weekend, as Francis Atuahene’s goal won the regular season title for the Wolverines. With that accomplishment, Michigan will host the winner of the first-round play-in game between the league’s two bottom feeders, Rutgers and Northwestern.

Maryland faces a significant challenge, as the program is in uncharted territory. With four straight losses, all at home, the arrival of Wisconsin to College Park is almost a must-win at this point. It’s hard to pinpoint just what’s gone wrong over the past couple of weeks, as the team has started shipping goals while also struggling to score. Their last win actually came against the Badgers in a wild 5-4 encounter out in Madison in a driving rain. Eryk Williamson scored a hat trick in that game, and the Maryland attacker needs to be back in the scoring column for the Terps to come away with a result. Chris Mueller is one of the nation’s most underrated seniors, and he’ll look to spring the upset.

Despite maintaining an unbeaten record, Indiana couldn’t find a way to win the Big Ten regular season title. Regardless, the Hoosiers look good, though they have struggled away from home. Penn State’s been extremely disappointing this year, and will likely see their season come to an end in Bloomington on Sunday.

Like Indiana, Michigan State finished the 2017 season without a loss in Big Ten play, and offer a similarly stifling defense. The Spartans’ challenge has been in the final third. If they can find enough goals, whether it’s against Michigan State on Sunday or in the NCAA Tournament, they’ll play deep into November.

There’s no mincing words for the quartet of teams in the Big East quarterfinals: victories are a must at this point in order to make it to the NCAA Tournament. That’s a shock territory for Creighton, which made it to this stage of the season by the skin of their teeth. Winning away at St. John’s likely won’t be enough for them to earn an at-large bid, as there hasn’t been quite enough help for senior Ricky Lopez-Espin. The Red Storm are unbeaten in four straight, though goal-scoring has been a challenge, as they’ve scored just four times during that stretch.

Over at Xavier, the Musketeers host the preseason Big East favorites. Providence finished as the No. 5 seed, as a defense that conceded more than the team’s scored this season has been one of the issues. Senior Mac Steeves has been effective at times, scoring eight goals in 17 appearances. His help has been limited, however, as no one else on the Friars roster has scored three.