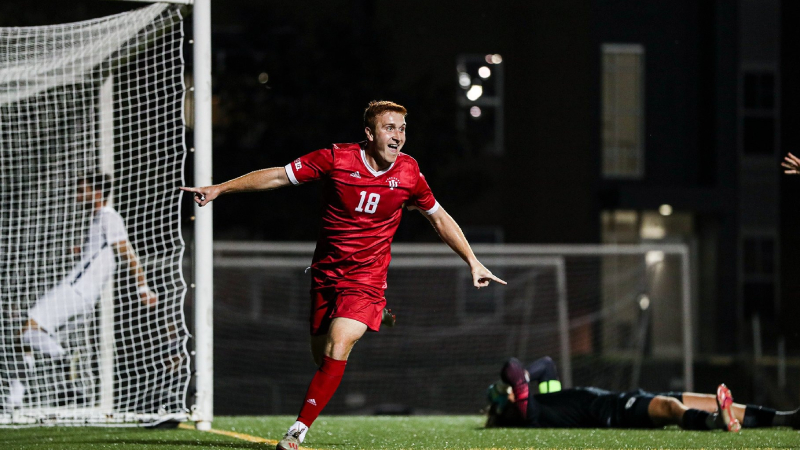 We’re down to the last eight of the men’s NCAA Tournament, and a number of top teams have long since been bounced from the field. Washington and Stanford have made their exits, while Virginia and Kentucky are also watching from home. The frenetic nature of play so far has brought on some unexpected contests, with teams such as Creighton, Portland and Vermont making deep runs. So, which four of the last eight will be playing in Cary, North Carolina next weekend? Here’s a preview of every match.

Is this where the run finally ends for Creighton. The Bluejays have thrived under adversity this season, twice coming from behind to win NCAA Tournament matches against seeded opponents. They’re a solid team, with a back five providing a rigid base for a fluid attack. There arguably hasn’t been a better attacking player in the nation than striker Duncan McGuire, who has 21 goals to his name. If he can get into good the areas, the Bluejays will have a chance.

But they might be outmatched by a more balanced Duke team. The Blue Devils haven’t always played the prettiest brand of soccer this year, but they’ve ground out results — making an early ACC tournament exit seem more a blip than a catastrophic defeat. Their attacking options are bountiful, but everything starts with the midfield play of Peter Stroud. He can boss any game from the center of the pitch thanks to his passing range and feel for the game. If he’s on and pulling the strings, Duke will certainly have their moments.

Pittsburgh relied on star power to beat Kentucky, with its two best attacking players grabbing the goals. First, Valentin Noel diverted a cross home from close range. Then, Bertin Jacquesson lashed a shot into the top corner to win the game with less than three minutes remaining. It was something of a belated awakening from two players that hadn’t always been at their best this season. If they’re at it again, Pittsburgh will like its chances.

Portland has found form at the right time, and has been notably tight defensively in recent weeks. The Pilots have only conceded one goal across their last five contests, and don’t allow too many chances, either. Going forward, they’ve been opportunistic. Brandon Cambridge is their main threat, with 12 goals and seven assists to his name. But Sebastian Nava has also established himself as a top playmaker, with 12 assists so far. Chances are, they’ll need to find some fluidity in attack to best a dangerous Pittsburgh side.

Syracuse has developed a penchant for grabbing goals late. Whether it be Levonte Johnson, Nathan Opoku or Lorenzo Boselli, the Orange have turned to their number of match winners for last minute drama. They create so many chances, that those precious moments aren’t just strokes of luck, either. The fact is, there is always a goal in this team. That spells trouble for Vermont.

The Catamounts, though, have weapons of their own. Alex Nagy is a delight to watch, and is incisive and clinical in the final third. Max Murray has developed into a capable goalscorer and the cast around them can do damage in a variety of ways. Against Syracuse, the key will be to start fast and score early. If the Catamounts can get into a rhythm, they just might be celebrating a College Cup appearance.

UNC Greensboro left it late last time out, needing penalties to beat Stanford. But it was a deserved result, with Chris Rich’s side turning in a solid all-round performance to knock off the no. 2 ranked Cardinal. Bouncing the presumptive tournament favorite should have the Spartans flowing with confidence heading into their contest with Indiana. Star forward Marco Afonso seems to have rediscovered his goalscoring touch, too.

But Indiana simply won’t go away. The Hoosiers have gotten healthy at the right time, and are playing their best soccer of the season. Ryan Wittenbrink has starred of late, scoring and assisting to carry his side deep into the playoffs. At the back, Daniel Munie is fit and back to his best — anchoring a solid back line. This is a balanced side, and a tough out for anyone it plays against.