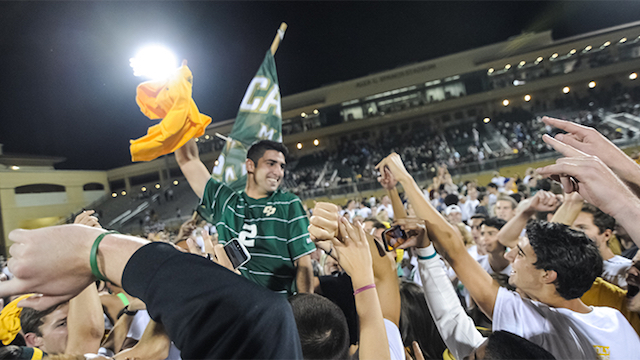 This is the best weekend of the men’s college soccer season so far. There is a game in North Carolina that will have scouts from all of the serious MLS franchises. There is a game in Central California that could sell out. Those are just two of the five quality games on the schedule for this weekend.

Five Games to Watch (records listed as of Oct. 14)

It’s the North Carolina showdown on Saturday. It’s the game that everyone has been looking forward to for weeks. The Demon Deacons host the Tar Heels on Saturday in a battle between the top two teams in the RPI heading into the week. The Tar Heels enter the game as one of three undefeated teams left in Division I. Wake Forest is the biggest hurdle standing in the way of an undefeated regular season for UNC. There is plenty of next level talent between these two teams. This is the best game on the schedule for this week.

The Blue-Green rivalry is always worth watching, but it’s been a while since both programs were ranked heading into the game. Saturday clash should be one for the history books. This is new Cal Poly head coach Steve Sampson’s first taste of the rivalry, and he gets to enjoy it on his home field. The Gauchos are on a roll thanks to the clutch play of towering forward Nick DePuy. The junior from Southern California has been on fire with all four of the game-winning goals in the past two weeks. If Cal Poly can slow down DePuy, they’ll have a chance to stay undefeated in conference play.

In the crowded ACC schedule, the matchup between Syracuse and Clemson on Saturday could be overlooked, but it also could be the most entertaining game of the weekend. These are two teams that can play good soccer when they find the rhythm and break down the opponent. With Syracuse at home, it is likely the Orange will take the aggressive approach and try to disrupt’s Clemson’s style.

UCLA continues its slow return to relevance this season with a game against Stanford on Friday. Heading into the week, UCLA’s RPI is No. 41, not exactly a desirable place to be at this point of the season. The positives for the Bruins are Stanford is No. 11 in the RPI, and UCLA still has a game against No. 3 Akron on the schedule. The negative is that UCLA is second in the Pac-12 in the RPI. That means UCLA likely needs to win all of its home games for a spot in the NCAA Tournament. The Bruins will enjoy the return of Jackson Yueill and Malcolm Jones from U20 Men’s National Team duty in Germany. Stanford gets Jordan Morris back from the U23 MNT.

This is the top Conference USA matchup of the weekend. Kentucky hosts red-hot South Carolina on Sunday. Both teams are perfect in conference play heading into the matchup. Kentucky was one of the most talented teams on paper heading into the season and have had some showings throughout the first part of the season to back up that claim. South Carolina has been organized and difficult to break down. This will be a fascinating game to watch on Sunday.

Chris Wehan, New Mexico - The Lobos season has hit the rails since conference play started, as the Lobos are 0-3 in Conference USA at this point in the season. Wehan was the savior for the team early in the season with his late game heroics. New Mexico needs that form to return in order to bounce back in conference play this weekend with a game against UAB on Sunday.

Sheldon Sullivan, Virginia - Sullivan leads Virginia in minutes played along side goalkeeper Jeff Caldwell. The Cavaliers are going through a minor dip right now with losses in three of their last five games. Virginia needs to turn it around in the final weeks of the regular season, which starts on Friday with a game against Pittsburgh. Sullivan will be a key player in that game as he tries to shut out Pittsburgh and helps Virginia improve on its 6-1-1 home record this season.

Billy Heavner, UMBC - The Retrievers goalkeeper takes the spotlight this week. Heavner was the conference co-player of the week last week after a mesmerizing performance against Albany. He is going to be tested again against a good New Hampshire side on Saturday, as the Retrievers aim to bounce back from a mid-week defeat against Vermont.