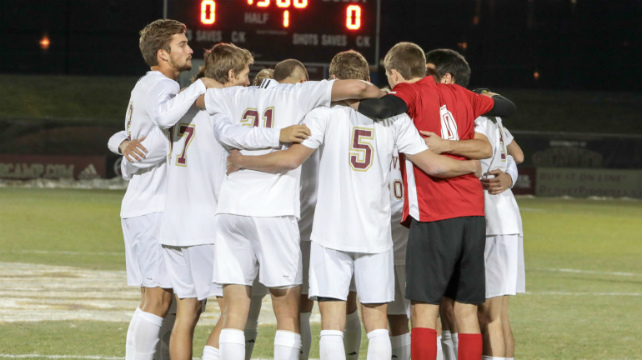 The Men’s Division I soccer season is down to the final two weeks. This weekend is the Elite Eight round of the NCAA Tournament. Among those eight teams, there are are five ACC programs left in the mix. The ACC is guaranteed at least one spot in the College Cup with the battle between Virginia Tech and Wake Forest providing one representative, but it seems like that there will be more than one team from the powerhouse conference in Houston next week. ACC teams host every game in the Elite Eight round.

TDS previews and predicts the four games from the Quarterfinal Round.

North Carolina went on the road and knocked off Syracuse in the Third Round to earn the right to host the Quarterfinal game in Chapel Hill. Providence is one of two unseeded teams left in the competition. The Friars have won two games on the road in order to get this stage of the competition. Providence goalkeeper Colin Miller is on a dream run. The redshirt sophomore is 14-1 on the season. After only playing eight minutes in 2015, Miller took over in goal this season during the early stages of 2016 and looks to be the keeper of the future for the Friars. During the 15 games stretch, he has eight shutouts. In the last round, he made nine saves in order to keep his season alive. He will need to be just as good on Friday. North Carolina is 10th in Division I in goals per games with an average of 1.95. The Tar Heels pepper the net with shots. They’ve recorded 132 shots on goal this season. However, the Tar Heels historically keep these games close. North Carolina has let it one goal or less in 12 of their last 14 NCAA Tournament games. This game figures to be just as close.

This is the game of the ound. The Cardinals meet the Cardinal on Saturday in Louisville in the Elite Eight battle between Louisville and Stanford. The home team defeated Notre Dame 3-1 in the previous round while Stanford knocked off Virginia 1-0. Stanford is 4-1-2 on the road this season, but they have not left the West Coast since early September. Traveling to Louisville is the big wildcard for this matchup. The Cardinals are a 10-2-1 at home this season, and riding a three-game winning streak in their friendly confines. The key to success for Stanford is making the most of the chances they get in the game. The Stanford defense is always up for the task, but the finishers need to put one or two away to steal this one on the road.

Clemson faces its biggest challenge of the postseason on Friday when Denver comes into town. The Tigers are 9-2-2 at home this season and have been in a pair of close games during the NCAA Tournament run. Denver offers the biggest challenge because of the Pioneers style of play. Denver is a solid defensive side that is organized and limits chances. Clemson can provide a bit of magic with Diego Campos, but the team does well in taking advantage of mistakes. Denver’s offense does not get enough credit, but they are a spunky bunch that scores in a variety of ways, and will push Clemson to the limit on Friday night.

Despite being from the same conference, this is the first meeting of the season between Wake Forest and Virginia Tech. The two programs did not meet up in conference play and now battle for a spot at College Cup. The Demon Deacons are 13-1-1 at home this season, losing the opening game against Saint Louis and going undefeated after that in Winston-Salem. Saturday’s matchup will be a challenge though. Virginia Tech put together a good game plan against Indiana last week and the Hokies could deploy something similar against Wake Forest. With a concentration on crowding out the center midfielders, the Hokies could find success defensively with limiting Ian Harkes and Jacori Hayes time on the ball. Wake Forest will need to be mindful of the weapons that Virginia Tech has on the bench. The availability of senior goalkeeper Alec Ferrell is one to watch here as well, as the Demon Deacons have played freshman Andreu Cases Mundet in net all tournament long.