The Caleb Porter era in Akron is no more.

With the Zips crashing out in heartbreaking fashion – losing on penalty kicks in Sunday’s third round action against Creighton – Porter’s storied tenure at the Zips came to an end, as he’ll assume control of MLS side Portland Timbers next month.

Akron, which outshot the Bluejays 31-11 throughout the game, looked to be cruising to a 1-0 win until freshman Timo Pitter equalized with less than five minutes left to go in regulation. 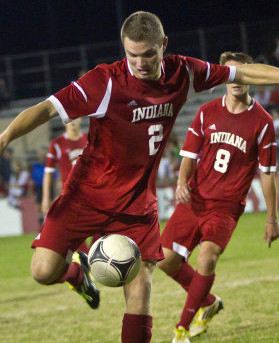 The drama was far from over, however. Early on in the first overtime, Akron had a chance to win the game from the penalty spot when Jose Ribas earned a red card for his handball in the penalty area. Creighton ‘keeper Jeff Gal denied Akron’s Scott Caldwell from winning the game. In post-match kicks from the spot, Pitter stepped up to covert the decisive PK and send Akron home early.

Hero of the moment in Bloomington, Indiana, is sophomore sensation Eriq Zavaleta. The sophomore forward picked the right time to score his first-ever NCAA Tournament goal – heading home against No. 1 seed Notre Dame in the second overtime period to knock out the Hoosiers’ in-state rivals and

Connor Brandt stepped up to provide the heroics for the Toreros, who erased a 1-0 deficit against Tulsa to keep the Cinderella dream alive. USD also got a goal from Conor McFadden after Tulsa initially took the lead, and will face Georgetown for a shot at the College Cup.

When two of the more potent attacks in the nation crossed paths over the weekend, one clear winner emerged.

"I'm very proud of our guys. I thought defensively, we did a great job," Maryland head coach Sasho Cirovski said after the game. "Although this was two great attacking teams, I thought the team that was going to win was the one that was better defensively, and I thought our guys did a great job in neutralizing some of the great individual players that Coastal has.

"I thought it was a great overall performance. I'm very proud of our guys and I'm delighted that we're moving on."

Other notable performances of the third round:

While Georgetown’s Tomas Gomez nabbed a spot in the Team of the Week for his penalty kick heroics (Hoyas advanced on penalty kicks), it was far from the only strong performance between the pipes this weekend. Gomez’s opponent on the day, Alex Bono of Syracuse, made several impressive stops to keep his Orange out in front. Creighton’s Jeff Gal also stood on his head in the two overtimes, somehow keeping the game tied 1-1…Connecticut freshman Nicholas Zuniga picked the right time for his first goal of the season, scoring in overtime to send the Huskies into the next round with a 2-1 win over New Mexico…Louisville midfielder Dylan Mares went on a mazy run in Northwestern’s penalty area on Sunday night, and while he completely botched his shot, it forced an own goal that proved the decider in a 2-1 win.