With thirty seconds to go in the Big East Conference championship, Georgetown held a 2-1 lead and were all set to cue celebrations at the final.

Cue drama and a frenetic finish to the game. Nick Besler headed home the equalizer for Notre Dame with 30 seconds left, and just when it looked like the game was destined for penalty kicks, Irish leading scorer Ryan Finley popped up and scored the title-clinching goal on a corner kick. 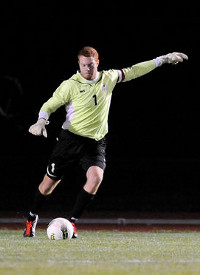 “That was a great final,” said Notre Dame head coach Bobby Clark after the win. “Two good teams, two very good teams. To have two teams play this way in a final shows how good they are.”

Both teams showed their quality, playing a second high-level match in three days, and each has to be considered as legitimate national title contenders heading into the NCAA tournament that start this week.

Nevertheless, that doesn’t take away from how gutting of a loss it was for the Hoyas.

“This is an incredibly difficult tournament to win, it's very reasonable facsimile to the NCAA Tournament," Georgetown head coach Brian Wiese said after the game. "Taking a step back, if you're a fan of the game, it was a pretty exciting college soccer game. There was plenty of drama, and plenty of heartbreak from our point of view.”

One year after getting tripped up in the semifinals of the MAC tournament, the #1 ranked Akron Zips dug deep to pick up yet another conference tournament title, winning 2-0 at home against Northern Illinois.

After failing to secure the breakthrough in the first half, and for much of the second, the Zips finally scored in the 72nd minute thanks to Saad Abdul-Salaam’s first-ever collegiate goal. Aodhan Quinn scored less than three minutes later to put the game out of reach and secure yet another piece of hardware for head coach Caleb Porter and the rest of his vaunted program.

A quick goal set the tone for Saint Louis in the Atlantic 10 championship against VCU, as the Bilikens scored in the fifth minute on their way to a convincing 3-0 defeat of the Rams.

"It's a great feeling," Saint Louis head coach Mike McGinty said in a release. "I'm so happy for our guys, they played their socks off. The A-10 is extremely competitive, this is a tough event to win. VCU is a great team, and Xavier and La Salle were great tests as well. We would also like to thank Charlotte and the A-10 for running a first-class event.

"Winning this tournament was high on our list of goals at the beginning of the season, as was making the NCAA Tournament," McGinty continued. "We look forward to resting up, getting healthy and seeing who we play in the NCAAs."

There was no late season collapse from the Big Red this time around.

Heading into Saturday’s finale against Columbia – what turned into a 1-0 win – the Big Red already clinched at least a share of the Ivy League crown thanks to Brown’s 1-0 loss against Dartmouth. The victory over Columbia secured the accomplishment, the program’s first since 1977.

“When we were first starting out, our visions weren't of winning the Ivy League, that's for sure," goalkeeper Rick Pflasterer said after the game. "Now finally all the work we've put in over the last four years has paid off. We've accomplished an Ivy League Championship, but we have another step to go in the NCAA Tournament.”

Much has been made of Coastal Carolina’s vaunted attack, but the Chanticleers blew a two-goal lead on Sunday in the Big South Conference championship game, losing 3-2 against Winthrop.

"I'm really proud of the effort these guys gave today as they did a great job fighting back," Winthrop head coach Rich Posipanko said in a release. "Coastal is a great team and very difficult to play against but even going down 2-0 this group continued to play hard and believed in themselves to come back. It was another great game against Coastal, which is always the case."

Holding a 2-0 lead in the 26th minute, Coastal Carolina surrendered three goals in the second half, including two in the game’s final four minutes to come up short.