Men's Team of the Week: April 6 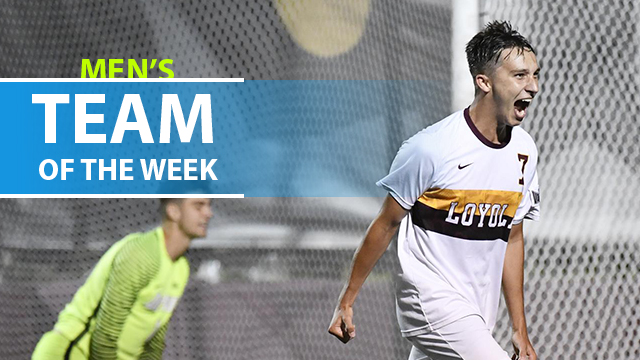 A push for the Missouri Valley Conference regular season crown may be just out of reach, but it was still a great week for Loyola-Chicago.

The latest men’s Player of the Week helped get the Ramblers a pair of wins in high-scoring fashion. Junior midfielder Billy Hency had a hand in five of the six goals his team scored win wins against Bradley and Evansville.

He scored a goal and had an assist in a 3-2 overtime winner against Bradley on Wednesday, before putting in a two-goal, one-assist shift in a much more comfortable 3-0 win this past Sunday.

Check out some of the other top performances from around men’s Division I soccer.

GK George Marks, Clemson – Four saves from Marks ensured that his side kept a zero. And while they didn’t manage a goal of their own, it was a strong performance in a matchup between two top-five teams.

D Patrick Hogan, Charlotte – After navigating a pause due to the pandemic, Charlotte returned to action and helped his side pick up a 3-0 win against Old Dominion. The senior center back played the full 90 as the 49ers nabbed another win in Conference USA play.

D Bryce Washington, Pittsburgh – It was a dominant home win for Pitt, which blanked Notre Dame by a 2-0 score. Washington and the Pitt back line conceded just three shots all game, and he was credited with an assist on the game-winning goal.

D Arnor Adalsteinsson, Furman – The junior from Iceland played every minute in two games as Furman secured the SoCon regular season title. Furman grabbed a 3-0 win against Belmont and drew 0-0 against Wofford.

D Nico Benalcazar, Wake Forest – On the other side of the Clemson-Wake Forest matchup, Benalcazar led a short-handed back line to a clean sheet of their own in the 0-0 draw.

M Sebastian Chalbaud, High Point – An excellent season at his new school continued for Chalbaud, who scored twice and setup another goal in High Point’s 5-1 win against Longwood. The Panthers are currently 7-0 in Big South play with one game left to go.

M Jacob Montes, Georgetown – The senior signed off his college career with a bang, scoring two goals and adding two assists in a comfortable 5-1 win against Connecticut.

M Jonas Fjeldberg, Dayton – Two goals and two assists from the midfielder powered Dayton to a big 5-1 win against Duquesne.

M Billy Hency, Loyola-Chicago – Even though Missouri State is leading in the MVC, Loyola-Chicago has enjoyed a great season thus far. Hency had a big week, scoring a goal and nabbing an assist last week against Bradley, then scoring twice and adding a helper in a 3-0 defeat of Evansville.

F Enrique Banuelos, Northern Illinois – A goal and assist for Banuelos from the bench led NIU to a 3-1 win against Akron.

F Nigel Griffith, Temple – The freshman forward had a huge weekend as Temple upset Tulsa. He scored a goal and then had three assists on the way to a 4-1 win.