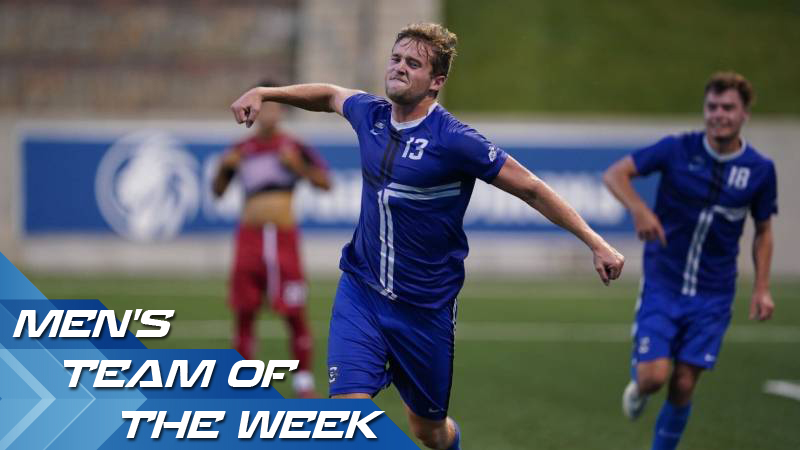 Duncan McGuire timed his run to perfection. With Creighton defender Miguel Ventura scampering down the left side, McGuire lurked between two defenders. And just as Ventura released the ball, McGuire darted in front of them, meeting Ventura’s cross with a solid side footed finish into the back of the net.

It was a poured striker’s goal, a slick combination of movement and deft finishing. It was also the first of five goals from the striker in men’s college soccer’s opening weekend. He led the Creighton line with aplomb, bagging a hat-trick as the Blue Jays downed Oakland in the season opener, before adding two more in a 6-1 rout of Rutgers. Here was a player in lethal form, happy to operate in and around the box, relying on smart runs and his teammate’s probing passes to find the back of the net. There wasn’t a better player in men’s college soccer to open the season.

Here are 10 others that starred during week one of play.

GK Cole Jensen, Xavier - Jensen recorded 11 saves across the opening weekend, including an eight save performance against Virginia. His level of play was a big part of why the Musketeers are undefeated.

D Evan Morrison, Boston University - Morrison anchored a backline that blanked a ranked New Hampshire side Sunday evening. The Terriers have enjoyed their best start to a season since 2014, with a stout defense leading the way.

D Tommy Silva, UCLA - Silva’s searching left footed cross was a difference maker in a tight contest between UCLA and Virginia Tech Sunday night. Jose Contell met Silva’s pass perfectly, tucking the ball away for a 1-0 win to help the Bruins to a 2-0 start to the season.

M Kemy Amiche, Campbell - Amiche lead the Campbell attack in week one, scoring once and adding three assists to lift the Camels to a 2-0 start.

M Ousmane Sylla, Clemson - Sylla scored twice against Indiana in the Tigers’ season opener, highlighted by a shot smashed into the top corner to put the Tigers 3-2 up with eight minutes remaining.

M Shakur Mohammed, Duke - Mohammed bagged a brace against Wisconsin-Milwaukee in a 4-0 win. He was also a lively presence in a hard fought 1-0 win over a resilient San Diego side.

M/F Tony Pineda, High Point - The Panthers' hot start has been one of the surprises of the season so far. Pineda has scored both of their goals so far, including a curler to equalize against Georgetown.

F Bertin Jacquesson, Pittsburgh - Jacquesson lived up to the preseason hype against Georgetown Thursday night. He scored once and assisted another, and was a constant threat for a dangerous Pitt attack.

F Jack Finnegan, Wisconsin - Finnegan scored and assisted in the season opener. He went one better in a rampant Wisconsin performance against Tulsa, finding the net after an audacious run for his team’s first, before rounding the keeper for the second. Though the game was called off due to inclement weather, Finnegan terrified a top 25 team.