Men's Team of the Week: November 13 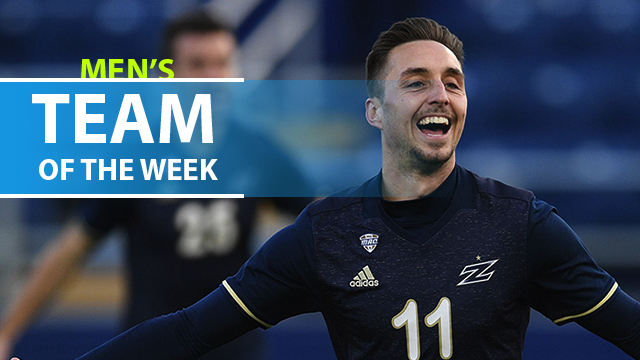 Heading into the conference tournament portion of the season, Akron looked like they could end up on the bubble come Selection Monday.

Three games, three wins in regulation later, and the Zips earned their spot in the tournament as MAC champions. A lot of that happened because of the latest Player of the Week: Marcel Zajac.

The Akron forward finished the week with three goals and an assist. He scored the winning goal in the quarterfinals, a 2-1 win last Tuesday against SIUE. After notching an assist in the semifinal against West Virginia, he added a brace in Sunday’s final versus Western Michigan.

See some of the other standout performers from last week’s men’s DI action below.

D Andrew Gutman, Indiana(m) – The senior left back scored a remarked goal on Friday against Maryland, where IU advanced on penalty kicks. He helped shut down Michigan in Sunday’s final, showcasing his ability to lock things down on both sides of the ball.

D Tyler Dickson, Rhode Island – After leading Rhode Island to three straight shutouts (including two last week) Dickson earned Most Outstanding Player honors in the Atlantic 10 tournament. The Rams picked up a 1-0 win against VCU on Friday and a 2-0 win over George Mason in Sunday’s final.

D Brendan McDonough, Georgetown – It was another Big East tournament title for the Hoyas, and McDonough was the center piece. He started and led the back line to a 4-0 shutout in Wednesday’s semifinal against Providence. In Sunday’s final, he scored the game-winning goal and led Georgetown to a 2-0 victory over Marquette.

M Daltyn Knutson, Central Arkansas – The Texas native scored a goal in each Missouri Valley Conference tournament game last weekend, including the winner in a 2-1 victory over Loyola-Chicago that secured the program’s NCAA tournament bid. Knutson picked up Most Valuable Player honors.

M Manuel Ferriol, James Madison – Thanks in part to the Spaniard’s efforts in the final third (he setup a goal in Friday’s 2-0 win against William & Mary and a goal in Sunday’s final) the Dukes punched their ticket to the tournament.

M Tate Schmitt, Louisville(m) – The star senior had a hand in both game-winning goals over the past week, as he was credited with the assist on the winners against Wake Forest on Wednesday and the ACC championship on Sunday.

F JJ Williams, Kentucky(m) – The dream season for Williams carried over into the Conference USA tournament, where he scored game-winning goals in victories against Marshall and Charlotte. With the C-USA double in tow, UK are the No. 4 seed in the tournament.

F Marcel Zajac, Akron – If Akron is to make another run in the NCAA tournament, Zajac needs to be a big part of that. He sits on five goals and seven assists heading into Thursday’s first round matchup against Rider.

F Laurence Wyke, Furman – With the game-winning goal in Friday’s 2-1 win against East Tennessee State, Wyke ensure the Paladins had a shot on Sunday to return to the NCAA tournament for the first time since 2015. He also setup the winning goal in a 3-0 win over UNC Greensboro, earning Most Outstanding Player honors in the process.