Men's Team of The Week: November 15 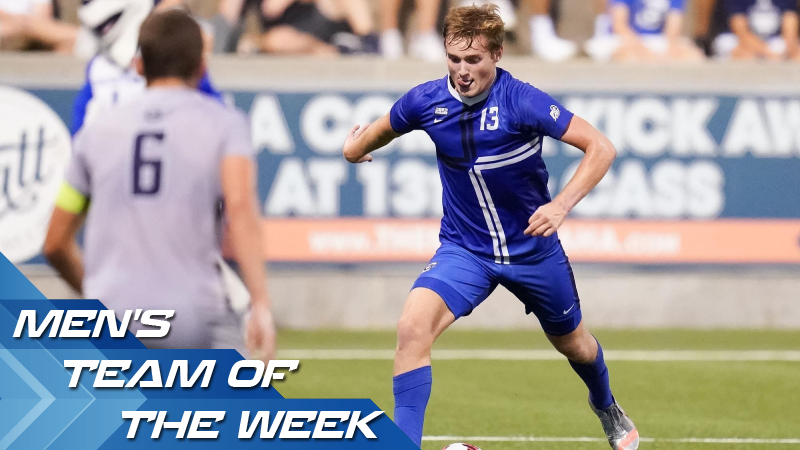 Duncan McGuire really shouldn’t have scored. The Creighton forward was sandwiched between two Georgetown defenders, with a third lurking. But he brought down Jake Ashford’s long pass all the same, cutting inside one player before holding off another. His finish was the result of a leg swung erratically, but the ball still found the net. McGuire’s goal created breathing room between the Bluejays and Georgetown in the Big East championship — a trophy they would eventually clinch to the tune of a 3-0 win. It was also emblematic of McGuire’s season. The striker plays in the box, invites contact, and looks to finish from close range. That style benefitted Creighton more than ever last week, as he scored five goals across two games to lead his team to the NCAA Tournament. Without him, the Bluejays wouldn’t be there.

D Noah Gulden, Lipscomb - Gulden has been a steady contributor of assists for Lipscomb this year. And last week was no different, as the grad student assisted two of the Bison’s six goals in the ASUN championship.

D David Garcia, Florida International - Garcia’s strong play helped FIU to the NCAA Tournament, as he scored in the AAC championship game — and also led the Panthers to a clean sheet.

D Benjamin Joseph Do, Penn - Much of Penn’s success this year has been built off a stout back line. And Do has been a regular part of that. Last week, he was particularly valuable, scoring and shouldering heavy minutes as the Quakers clinched the Ivy League title.

D Luis Grassow, Kentucky - Grassow was the difference maker for Kentucky Sunday afternoon. He scored and held off a dangerous James Madison attack to seal the Sun Belt title.

M David Perez, Oregon State - Perez came off the bench to score the only goal as the Beavers upset Washington in a massive Pac 12 contest.

F Duncan McGuire, Creighton - McGuire scored five goals across two games to lift the Bluejays to the America East title — and clinch a spot in the NCAA Tournament.

F Lorenzo Boselli, Syracuse - Boselli was instrumental for the Orange as they won the ACC Tournament. He scored in the semi final and championship game.