Men’s Team of the Week: November 16 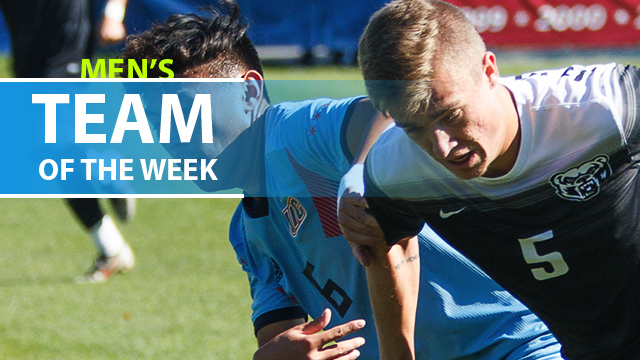 After a slow start to the season, Oakland has caught fire at the right time.

Four straight wins propelled the Grizzlies to the Horizon League regular season and conference tournament titles, with one of its best players starting to click.

TDS Player of the Week Noah Jensen propelled Oakland to a pair of wins last week, securing the Horizon League tournament title and automatic berth. Jensen scored three times in the tournament, also picking up an assist in the title game.

GK Kobe Gray, Denver – While Gray didn’t play outside of two penalty shootouts, he came up huge to deliver Denver to the Summit League title. The Pioneers needed Gray’s heroics in both the semifinal and final in order to secure the crown.

D Noah Egan, Vermont – In one of the biggest upsets of the weekend, Vermont found a way to best New Hampshire by a 1-0 score in the America East title game. Egan contributed to the team’s clean sheet in the final, playing every minute in Sunday’s win. In the mid-week semifinal, he contributed an assist in a 3-2 win over NJIT.

M Noah Jensen, Oakland – By his lofty standards, it was a slow start to the season for Jensen. In the last four games, he is heating up, with four goals and five assists, getting hot at the right time of the campaign.

M Justin Ingram, Loyola (MD) – The grad student scored twice in the Patriot League final, a 2-1 home win against American that secured a spot in the NCAA tournament.

M Seth Kuhn, Penn State – Another huge pair of games from Kuhn, who certainly made a strong case for Player of the Week himself. In leading the Nittany Lions to the Big Ten tournament title, Kuhn scored the winner in the semifinal against Michigan and final versus Indiana. He also had an assist on the third goal in Sunday’s triumph.

F Eythor Bjorgolfsson, Kentucky – The forward injected goals from the bench, as Kentucky won the Conference USA tournament. The Norwegian scored twice in three games, including the winning goal in the championship game.

F Stefan Stojanovic, Georgetown – A brace from Stojanovic in the Big East tournament final secured the conference tournament crown, helping the Hoyas to a No. 3 seed in the NCAA tournament.

F Nick Markanich, Northern Illinois – The MAC Player of the Year was hero again, scoring the winning goals in the semifinal and final of the conference tournament. Markanich scored twice and had an assist in two games.