Men's Team of the Week: November 2 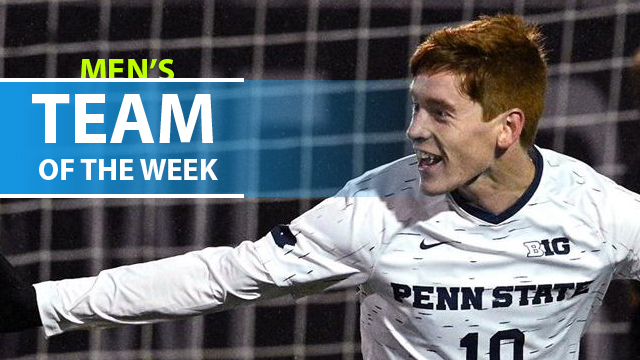 On a three-game losing streak heading into the final week of the regular season, and trailing 2-0 in the first half of a crucial game, it looked like Penn State’s hope of a Big Ten title were done and dusted.

Enter the TDS Men’s Player of the Week Seth Kuhn.

With the Nittany Lions down 2-0 at home against Maryland, Kuhn helped flip that into a 3-2 win last Tuesday with a goal and the assist on the winner in overtime. That gave Penn State the chance to at least clinch a share of the regular season title with a win on Sunday at Wisconsin. Kuhn was back in action, scoring both goals in a 2-0 victory that recurred hardware for the program.

Check out some of the other top performances from the past week of games in Division I men’s soccer.

GK Brendan Graves, Bowling Green – Seven saves from Graves helped Bowling Green hold on for a 1-1 draw against Western Michigan over the weekend. Thirty-five minutes of that came with the Falcons down a man as well. He also kept a clean sheet earlier in the week in a 3-0 defeat of Oakland.

D Karson Kendall, High Point – Depleted due to injuries, Kendall anchored a stout defensive effort by the Panthers in a 0-0 draw against conference champions Campbell. Kendall played 110 minutes and helped limit the Camels to just two shots on goal.

D Gael Gilbert, Oregon State – The freshman defender played the full 90 minutes in two Pac-12 wins at home, 1-0 against Stanford and 2-0 against California.

M Hendrik Hebbeker, Hofstra – Hebbeker provided a pair of goals as Hofstra moved one more win closer to a CAA regular season title. The 2-0 win against Elon down in North Carolina has set them needing a win next weekend against UNC Wilmington to officially clinch it.

M Joe Brito, Charlotte – A goal and assist from the senior helped Charlotte pick up a massive, massive win for their at-large hopes in a 2-1 win over Kentucky.

M Quinn McNeil, Clemson – An extremely impressive week from Clemson saw the Tigers score nine and concede just one goal in two home games. McNeil scored in both, and added an assist in a 5-1 drubbing of Louisville on Friday.

F Nicholas Markanich, Northern Illinois – With an 84th minute winner against Akron, Markanich secured the MAC regular season title for NIU. The senior now has 14 goals on the season.

F Oscar Haynes Brown, George Washington – Four goals from Brown led George Washington to a 4-3 win in overtime against St. Bonaventure. Unfortunately, his side missed out on the Atlantic 10 tournament on a tie breaker.

F Daniel Diaz-Bonilla, Princeton – Now 5-0 in the Ivy League, the Tigers took a step towards winning the regular season title with a 2-1 defeat of Cornell. Diaz-Bonilla had a big week, as he scored the winner in that game, along with the decisive strike in a 2-1 victory over Fordham earlier in the week.

F Tega Ikoba, North Carolina – A strong freshman season continued for Ikoba, who scored a goal and had an assist in a 3-1 win against Notre Dame. The ACC tournament kicks off on Wednesday.