Men's Team of the Week: November 6 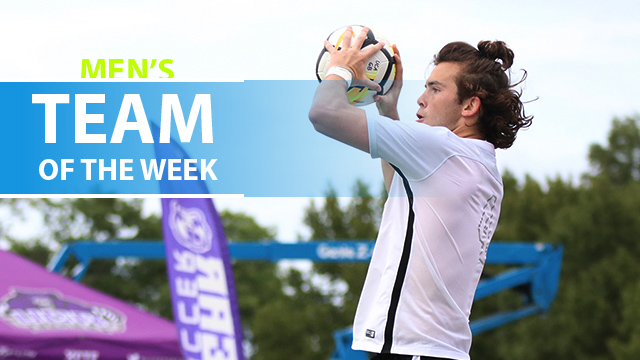 On a team known more for a prolific forward, it was the defense that won a championship over the weekend.

Central Arkansas took the field on Saturday needing a win to secure the Missouri Valley Conference regular season crown. And while Niklas Brodacki, who leads the team with seven goals, was kept in check, a defender stepped up at both ends of the field.

Sophomore defender Jake Bates, who played his way into the starting lineup this season, scored the winning goal in a 1-0 victory. He also went the full 90, helping secure the No. 1 seed in this week’s MVC tournament and a regular season crown.

Check out some of the other top performances from around men’s Division I soccer last week.

Team of the Week: October 29-November 4

GK Luis Barraza, Marquette – The Big East Goalkeeper of the Year had a big weekend. After missing a mid-week game against DePaul, Barraza made six saves in 110 minutes, and stopped a penalty to help Marquette advance to the Big East semifinal.

D Tanner Beason, Stanford – The Cardinal grabbed a share of the Pac-12 title with a pair of wins against Southern California programs. Last Thursday, Beason converted a PK to extend Stanford’s lead to 2-0 against San Diego State. He made a crucial goal-line clearance in Sunday’s 1-0 win against UCLA, helping Stanford hold on for a shutout.

D Jake Bates, Central Arkansas – Bates was a key player as Central Arkansas defeated Missouri State to win the Missouri Valley Conference Championship. He helped the UCA defense limit the Bears to just one shot on goal, while scoring the game's only goal in the 82nd minute.

M Kalil ElMedkhar, Kentucky – A goal and assist from ElMedkhar helped the Wildcats to another win and Conference USA regular season title. The midfielder from the Philadelphia Union Academy now has eight goals and eight assists on the season.

M Ryan Mingachos, George Mason – After scoring a pair of goals in a 2-0 mid-week win against Rhode Island, Mingachos anchored the Mason midfield on the way to a 1-0 win in the A10 tournament quarterfinals against Saint Louis.

M Joey Piatczyc, West Virginia – Make it two straight on the Team of the Week for Piatczyc. He scored a goal and setup two others with his free kicks as WVU beat Northern Illinois by a 4-3 score in overtime.

F Jonathan Jimenez, Pacific – The Tigers blitzed Portland with three goals in two minutes to beat the Pilots by a 3-2 score and solidify their hopes of an at-large bid. Jimenez scored all three goals.

F Yazeed Matthews, Coastal Carolina – The striker is arguably the hottest in the nation at the moment, as he scored two more times in a 4-1 win against Georgia Southern. After starting the season with two goals in six games, he now has 11 in the last seven.