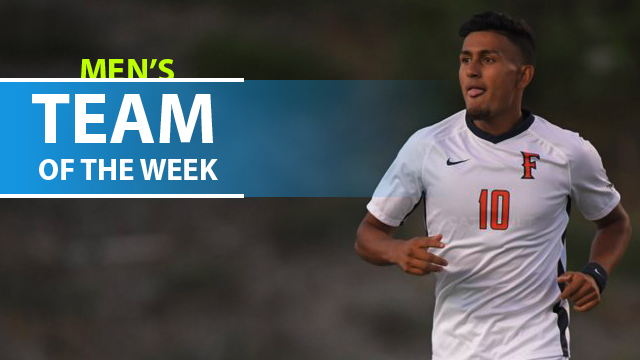 A handful of perfect teams remain in the men’s Division I soccer season.

One of those out west has the latest TDS Player of the Week to thank for maintaining his team’s perfect record.

Cal State Fullerton has won six from six, and over the past week, defeated Air Force and FGCU by the score of 3-2 and 2-0 respectively. Forward Christian Pinzon scored the game winners in both matches, finishing the week with two goals and two assists over the weekend.

Check out some of the other top individual performances around men’s Division I college soccer over the past week.

GK Jahmali Waite, Fairleigh Dickinson – While unable to come up with a win against Cornell, Waite’s shot-stopping helped keep the game close in a 1-0 defeat. The Philadelphia Union Academy vet made 14 saves after conceding a third-minute goal against the Ivy League side.

D Javain Brown, South Florida – The defender logged 90 minutes in last Monday’s 2-0 win against Louisville, a big victory for South Florida. Brown was back in the starting lineup on Friday as the Bulls beat Lipscomb 3-1.

D Brandon Terwege, SMU – It was a two-win week for SMU and Terwege. The defender started both games, and had an assist in a 6-0 win against Valparaiso on Friday.

D Nyal Higgins, Syracuse – A senior defender for the Orange, Higgins helped keep Louisville off the scoreboard as Syracuse drew 0-0 in their ACC opener at home.

D Davey Mason, Loyola (MD) – Off to an 0-4 start, Loyola finally got off the mark with a 2-0 win against Princeton. Mason chipped in an assist while also aiding the defensive effort.

M Zach Riviere, Georgetown – The sophomore scored the first three goals of his college career last week against UCLA, as the Hoyas picked up a big 5-1 win in Westwood. Georgetown is off to a 5-0 start.

M Dawson McCartney, Dartmouth – After losing its opening match 3-1 on the road at Wake Forest, Dartmouth spun off two wins back at home in Hanover. McCartney scored the game-winning goal in a 1-0 win against Massachusetts, and then defeated Michigan State 2-1 on Saturday. McCartney assisted on the first goal against the Big Ten side, playing every minute of the two wins.

M Ryan Matteo, Yale – A senior midfielder, Matteo anchored a pair of impressive wins for the Ivy League side. He scored twice in a 3-0 defeat of Connecticut, and logged 66 minutes in a 3-1 win over Niagara.

F Christian Pinzon, Cal State Fullerton – Pinzon’s been a huge part of Fullerton’s early success over the whole season, not just the past week. He has 4 goals and 5 assists through the six-game winning streak.

F Josh Dolling, Missouri State – Four games, four goals, all game winners for Dolling, who picked up where he left off in 2019. That includes two this past week, decisive tallies against Central Arkansas and Tulsa.

F Anders Engebretsen, St. Mary's (CA) – Another impressive start for the Gaels has been underpinned by several players. But Engebretsen continues to get his name on the score sheet, getting four in two games last week, plus adding an assist. He’s currently tied for the national goal-scoring lead with seven in 2019.