Men's Team of the Week: September 10 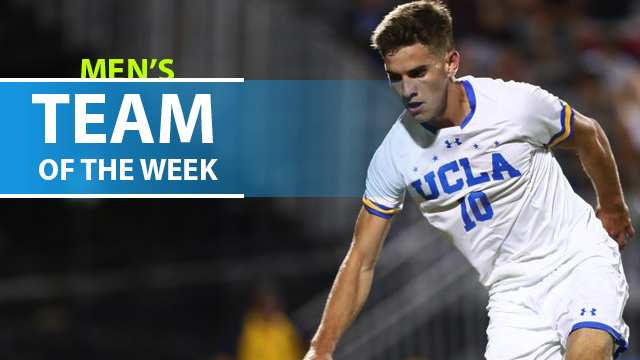 After all the offseason turmoil, 2019 is off to a strong start for UCLA.

The Bruins welcomed then No. 1 Maryland to Westwood on Friday night, and thanks to the latest Player of the Week, emerged 3-2 winners.

Previous Teams of the Week: Sept. 3

Forward Milan Iloski’s hat trick proved to be crucial in a wild game that saw the Terps score in the sixth minute. Iloski troubled Maryland through the night, however, providing all three goals on the night.

Below is the latest men’s Team of the Week.

D Eddie Munjoma, SMU – Munjoma’s goal-scoring presence against Saint Louis ensured SMU’s 2-0 win against Saint Louis on Friday night. He scored both goals and helped the back line keep a clean sheet, after scoring and adding an assist last Monday in a 7-1 victory over Houston Baptist.

D Kasey French, Washington – An impressive start to the season picked up pace last week for the Huskies, which won all three-game last week. He logged heavy minutes in three wins against San Francisco, Michigan State and Michigan, nabbing the winner on Sunday against the Wolverines.

D Andreas Ueland, Virginia – The Norwegian-American played the full 90 minutes in a pair of shutouts last week, defeating Maryland 2-0 at Audi Field and a 1-0 victory against High Point.

M Luke Hendel, Portland – Welcoming a pair of Atlantic 10 opponents to the Bluff, the Pilot offense surged to life with wins against Davidson and George Washington. Hendel ensured there would be no nerves, nabbing the early winners in both games.

M Daniele Proch, Duke – It was a pair of comfortable wins for the Blue Devils against a pair of ACC foes. Proch scored four goals, two in each game, to lead his side.

M Teddy Chaouche, Charlotte – A senior from France, Chaouche helped to jump-start Charlotte’s comeback win against Coastal Carolina. He setup the tying goal in the 86th minute, before scoring the winning goal in the second overtime.

F Alonzo Del Mundo, California – The sophomore picked up a hat-trick of assists, leading the Golden Bears to a 3-0 win against UC Santa Barbara at home.

F Milan Iloski, UCLA – Iloski’s been involved in the goals in all three games for the Bruins so far (as of publication, with four goals and an assist so far in 2019.

F Jack Lynn, Notre Dame – A perfect start to the season continued for the Irish over the weekend, winning both matches of the Mike Berticelli Memorial Tournament. Lynn tallied in both games, a 4-2 win over Seattle and the winning goal in a 1-0 defeat of Denver.