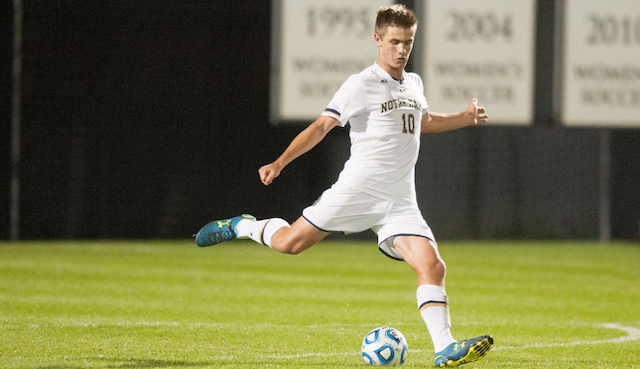 The Division I Men’s Soccer season kicked off last weekend with games all across the country. With a plethora of games on the schedule, there were a number of standout performances.

Check out which players made the TopDrawerSoccer Team of the Week. If you’d like to nominate a player for the Team of the Week, please email it to college@topdrawersoccer.com.

D Brandon Aubrey, Notre Dame - Aubrey was the Defensive MVP of the adidas/IU Credit Union Class over the weekend. His play at center back for the Fighting Irish helped secure two shutouts from the challenging tournament.

D Malcolm Dixon, Virginia - The freshman forward earned the start at right back on Saturday in Virginia’s 1-0 win over Charlotte. It was his first time playing the position. Dixon was filling in, but he drew the praise of his teammates and coaches after the game.

M Joey Piatczyc, West Virginia - The midfielder recorded four assists on Sunday in a 6-0 thrashing of San Francisco. Piatczyc set the school record for most assists in a goal with his offensive output against the Dons.

M Amar Sejdic, Maryland - The freshman midfielder was the Offensive MVP of the adidas/IU Credit Union Classic. He scored two in Maryland’s 4-0 win over St. John’s on Sunday. Sejdic started both games as the young Terps started the season 1-0-1 from two tough contests in Indiana over the weekend.

M Kevin Feucht, UC Santa Barbara - The UCSB debut of the German midfielder was quite impressive. Faucet was the best player on the field against a loaded Stanford side on Friday. He was the most important player on the day for UCSB pulling off the upset. He looks like he will be a key figure for the rest of the season for the Gauchos.

M Raby George, North Carolina - George scored two goals over the weekend to lead the Tar Heels to a perfect start to the season. The midfielder converted penalty kicks in both occassions. He was also a key in recording a shutout in both games.

F Pat Flynn, Bowling Green - Flynn was back to his normal dominant self with a goal and an assist on Friday in a 3-1 win over SIUE. He followed that up with a hat trick on Sunday in a 4-1 win over Western Illinois. It was the second hat trick of his collegiate career.

F Mikahil Doholis, Oregon State - Doholis tallied the game-winning goal on Friday in overtime over Marquette. It was a tremendous strike and just the start of a good weekend for the senior forward. Doholis provided the lone assist on Sunday as Oregon State upset Michigan State.

F Fabian Herbers, Creighton - Herbers had the game-winner against Michigan on Friday. He added a goal and an assist on Sunday in a 4-0 win over Wisconsin-Milwaukee. Herbers five points led the way for the Jays.

F Hamza Haddadi, Seattle - Haddadi scored four goals in Seattle’s 6-0 win over UC Davis on Friday. Three of the goals came on penalty kicks as the forward was perfect from the spot on the day. He added another from the run of play later in the game.