Men's Team of the Week: September 11 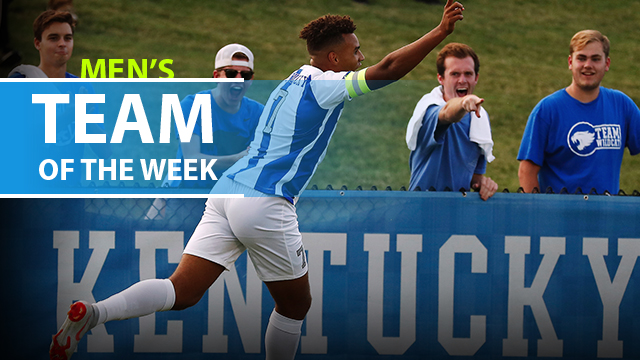 The Alabama native scored three goals in two games, including a pair of goals against Louisville, helping the Wildcats to No. 3 in this week’s TDS Top 25.

A 6-foot-4 striker, Williams had a first-half brace as UK topped rival Louisville by a 3-0 score last Tuesday. In the Conference USA opener on Saturday, Williams grabbed the winning goal as the Wildcats edged UAB 1-0.

See who else shined over the past week of men’s Division I College action.

GK Jimmy Hague, Michigan State – An outstanding senior season continued for Hague, as he played 171 minutes without conceding a goal in the past week. He made seven saves in that time, getting subbed out of one of last week’s wins after the Spartans were up 5-0.

D Erik Holt, UCLA – The strong start to 2018 continued for Holt and the Bruins on Saturday, as they traveled to College Park and defeated Maryland by a 1-0 score. Holt setup the winning goal from Mohammed Kamara.

D Jacob Graiber, UIC – The defender was key in a pair of wins, assisting on the winning goal in a 1-0 defeat of Western Michigan, while also playing the full 90 minutes as UIC defeated Oakland 4-1 on the road.

M/D Joey Parish, Washington – A local product, Parrish continues to have an excellent season as a junior. He scored two goals and had an assist in wins against Gonzaga and CSUN, before starting and playing 90 minutes as a right back in a victory over Akron on Sunday.

M Jon Arnar Barddal, Vermont – One of several programs that continued a hot start over the past week, Barddal helped the offense tick over in wins against Fairleigh Dickinson and Central Connecticut. The Icelandic midfielder scored twice and had an assist in the two games.

M Omir Fernandez, Wake Forest – Fernandez is showing no signs of slowing down as a sophomore. The sparkplug from out wide scored three goals in two games last week, including a brace in Wake’s 3-0 defeat of NC State.

M Rey Ortiz, Portland – As Ortiz goes, so goes the Portland attack. The midfielder accrued a goal and two assists over the past week as the Pilots notched wins over Cal Poly and Jacksonville.

M Shinya Kadono, California – It was a huge performance on Thursday for Kadono, who scored four times and added an assist as the Golden Bears beat Sacramento State by a 6-2 score.

F JJ Williams, Kentucky – With three goals in the past week, Williams now has four on the season, matching his previous season-high set as a sophomore.