Men's Team of the Week: September 25 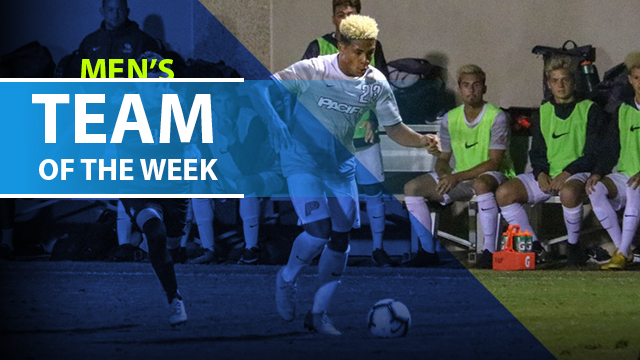 Pacific managed to eke out a 1-0 win last week against Stanford, as the Cardinal lost for the first time in 2018. Front and center to the win is the latest men’s Division I Player of the Week.

Jonathan Jimenez found the back of the net for the game-winning goal, and his tally was the tip of the iceberg to his contributions to Pacific over the past week. He also scored and had two assists in Pacific’s 4-2 defeat of UC Irvine on Sunday, capping off a tremendous week for the WCC side.

See which other standouts emerged over the past week of action in men’s Division I soccer.

GK Josh Adachi, Seattle – After a quiet night on Wednesday, blanking San Diego without making a save, Adachi stepped into action in Sunday’s 2-0 win over local rivals Washington. Adachi made four key stops to cement the victory.

D Filippo Zattarin, St. Mary's (CA) – Facing UC Santa Barbara and UC Davis this past week, Zattarin helped St. Mary’s keep a pair of shutouts and win both games 1-0 to extend their record to 9-0. He also setup the game-winning goal in overtime against UCSB last Wednesday.

D Aime Mabika, Kentucky – The 6-foot-6 center back converted a penalty kick in last week’s 3-2 win against Lipscomb, and then played 90 minutes as Kentucky kept a clean sheet in a 1-0 win against Charlotte in conference play.

D Josh Kaye, Wisconsin-Milwaukee – Kaye’s play at the back was instrumental in a pair of road wins last week, as he scored and assisted in a 2-1 win against local rivals Marquette. He played 72 minutes and helped his team to a 2-1 win against Northern Kentucky as well.

M Jackson Dietrich, Wright State – After missing last season, Dietrich is getting on track, logging a big week against Eastern Illinois and Cleveland State. The Nevada native scored the winner against EIU and had three assists in a 4-1 defeat of CSU.

M Mathias Ebbesen, Drexel – The senior midfielder from Norway was on fire last week, ensuring the Dragons bounced back from a CAA loss at home to James Madison. He scored three times in two games, including the winners against Bucknell and Elon.

M Michael Pimlott, Michigan State – His work may not show up in the score sheet, though Pimlott’s work rate and quality from a defensive midfield spot helps the Spartans throw numbers forward. He logged the full 90 in both games last week, wins against Notre Dame and Rutgers.

F Rodney Michael, UC Santa Barbara – Despite getting blanked against St. Mary’s, Michael was the catalyst in UCSB’s 3-1 win against UCLA on Saturday. Michael grabbed two goals in the span of five minutes that essentially put the game away as the Gauchos bounced back.

F Andre Shinyashiki, Denver – Shinyashiki's scorching hot start to the season continued, as he put four past Omaha in a come-from-behind win. The Brazilian now has 17 goals in eight games. While he's unlikely to break Thompson Usiyan's record of 46 in one year (set in 1980), Shinyashiki is having a season for the ages.

F Jonathan Jimenez, Pacific – A native of Florida and transfer from Seton Hall, Jimenez is heating up, with four goals and two assists in his last five games. The reigning Player of the Week is critical to Pacific’s WCC hopes.

F Ifunyachi Achara, Georgetown – The speedy striker scored both game-winning goals last week for the Hoyas, tallying in a 1-0 win against Duke and bagging the overtime winner on Friday against DePaul.