Men's Team of The Week: September 27 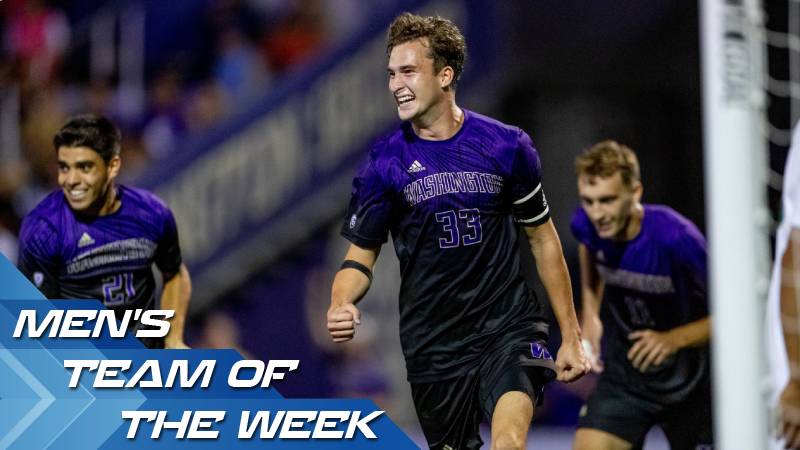 There was a brief moment where the pass might not reach Lucas Meek. His Washington teammate Chris Meyers had barraged past two defenders and cut the ball back towards the penalty spot. And as the ball rolled towards Meek, a Grand Canyon defender slid in. But it landed perfectly on Meek’s foot — and he dutifully tucked the ball into the bottom corner. It was the second of three goals across Washington’s two contests, a trio of calm finishes that kept the Huskies’ unbeaten start alive.

He added two assists to that tally, having a hand in five of Washington’s eight goals. And that level of performance makes him our player of the week.

GK Sebastian Conlon, James Madison - The keeper was instrumental in a rebound week for the Dukes. He posted two clean sheets and 10 saves as James Madison picked up points against Georgetown and Old Dominion.

D Keegan Hughes, Stanford - UCSB appeared the be a tricky matchup for the cardinal, but Hughes helped them to a 2-1 win. He was solid at the back and also knocked in a header to put his team ahead.

D Alex Mirsberger, Marquette - Mirsberger scored three remarkably similar goals for Marquette in its 5-2 win over Wisconsin-Milwaukee, nodding in three headers from the back post to complete a first half hat trick.

D Lewis Green, Missouri State - Green had a hand in one of the best games of the week, bagging a brace in Missouri State’s 4-3 win over Evansville — capping off a strong offensive week for defenders.

M Eric Conerty, Western Michigan - The senior midfielder was instrumental in Western Michigan’s win over Northern Illinois, scoring and adding an assist. The helper was his third in the last two games.

M Harrison Coron, Drexel - Coron came off the bench to score four goals for the Dragons in their 5-0 thrashing of Charleston.

M Knut Ahlander, SMU - Ahlander had a major hand in a big night for the Mustangs, scoring two as they beat FIU 6-4.

F Eythor Bjorgolfsson, Kentucky - Bjorgolfsson continued to score for Kentucky, bagging three goals, including a standout brace to carry it over a resilient Lipscomb team.

F Palmer Ault, Butler - Ault scored twice in two games for Butler as the Bulldogs enjoyed a perfect, 2-0 week. He also added a couple of assists.

F CJ Tibbling, Portland - Tibbling enjoyed one of the most successful performances in Portland’s recent history last week, scoring four against Utah Tech. He now has five goals on the season.