Men’s Team of the Week: September 28 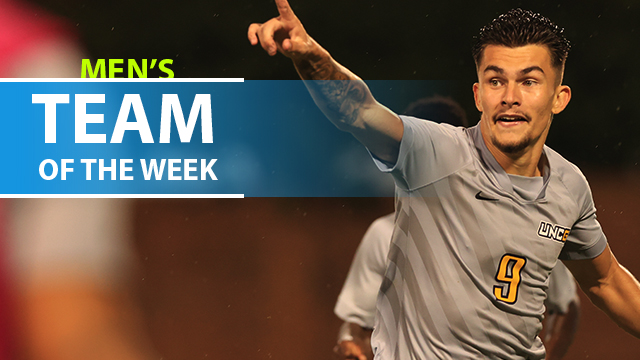 It was quite the week for the UNC Greensboro offense.

Headlined by the TDS Player of the Week Theo Collomb, UNCG scored 10 goals in two games, including a 3-1 win against then-No. 2 Clemson last Tuesday.

The France native scored twice against the Tigers, including the game-winning goal in the first half. He followed that up with three goals and two assists in a comfortable 7-0 victory against Virginia Military Institute over the weekend.

Check out some of the other top performances from the past week of men’s Division I soccer.

GK Oliver Semmle, Marshall – The spring champs picked up a pair of shutouts last week, beating Akron 2-0 and home before drawing 0-0 against Kentucky. Semmle ensured his side didn’t lose the conference matchup against the Wildcats, making five saves.

D Melker Anshelm, James Madison – The Dukes nabbed two shutouts last week, beating Virginia and Elon. Anshelm came up with the game-winning goal in a 1-0 mid-week win against the Cavaliers, scoring a golden goal in overtime.

D Kipp Keller, Saint Louis – The sophomore was immense against George Mason, scoring a goal while helping his side keep a clean sheet at home in a 4-0 win in Atlantic 10 play.

D Bridger Hansen, New Hampshire – Hansen helped his side continue to roll, as UNH is now 9-0 on the season. After missing a few games due to injury, Hansen scored the second goal in a 4-1 win over Hartford, and played 72 minutes in a 5-0 mid-week romp over Quinnipiac.

D Zeron Sewell, VCU – A stout performance from Sewell helped VCU snag a pair of 2-0 win last week. He scored a goal from the penalty spot as well as playing every minute as the Rams beat Old Dominion and Dayton in league play.

M Kyle Cusimano, Bowling Green – Bowling Green won two more games last week, thanks in part to Cusimano’s offensive output. He was credit with an assist on the game-winning goal against Detroit, then scored he winner himself on Friday night versus Canisius.

M Joshua Bolma, Maryland – An electric attacking forward, Bolma was excellent against High Point and Ohio State last week. He scored a goal and setup the other in a 2-1 victory over the Buckeyes in Big Ten play on Friday.

M Nicholas Scardina, Washington – After helping his side pickup a 2-1 win against local rivals Seattle last Monday (Scardina tallied the game-winning goal in overtime), Scardina played 73 minutes in a 2-0 defeat of Portland.

F Theo Collomb, UNC Greensboro – Strong in the spring during his freshman season, Collomb is dominating the fall. He now has 11 goals in eight games after scoring five in the last two games.

F Bryan Iliohan, California Baptist – Collomb wasn’t the only forward to score five times last week, as Cal Baptist’s Iliohan matched that production. He scored twice in a defeat of St. Thomas and then bagged a hat trick on the road versus UNLV.