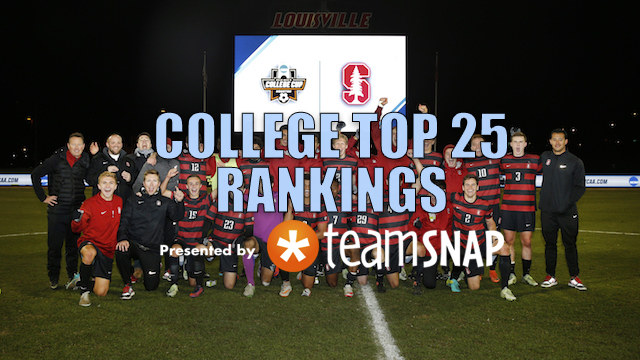 The Men’s Division I Soccer season is down to its final weekend. The campaign began across the country in late August and will end on the second weekend of December in Houston, Texas. There are four teams left in the competition for the National Championship.

No. 1 Wake Forest (18-2-3) defeated Virginia Tech 2-0 on Saturday and claimed one of the spots in Houston. Wake Forest retains the top spot in the TDS Top 25 for this week. The Demon Deacons have scored six goals and only allowed one during the NCAA Tournament.

No. 2 Stanford (14-3-4) went on the road and defeated Louisville 2-0 in the final game from the Elite Eight round on Saturday. Foster Langsdorf scored his 15th goal of the season on Saturday, which is the most by a Cardinal since 1981.

No. 3 Denver (21-0-3) also went on the road and claimed a big win. The Pioneers defeated Clemson 1-0 on Friday. The win for Denver sets up a fascinating semifinal between Denver and Wake Forest on Dec. 9, as Wake Forest head coach Bobby Muuss faces his former program in Houston.

No. 4 North Carolina (14-3-3) defeated Providence 1-0 in the other game from the Elite Eight round. The Tar Heels match-up against Stanford in the College Cup semifinal on Friday. North Carolina kept hold of the No. 4 spot for another week as the TDS Top Five remained unchanged from Week 15 to Week 16.

Check out the full TopDrawerSoccer Men’s Division I Top 25.