Miguel Ibarra: From Obscurity to Limelight 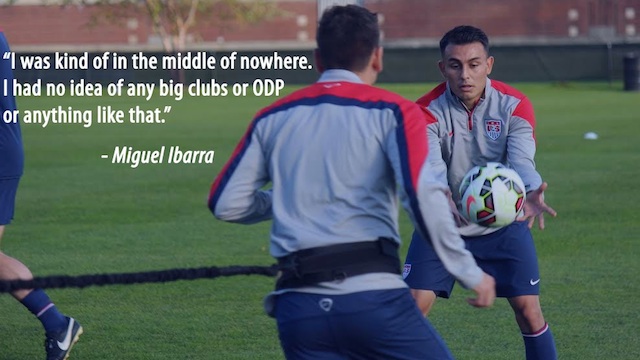 Miguel Ibarra spent nearly his entire developmental career on the fringes of the known soccer world. How he went from absolute obscurity to hanging his jersey next to Landon Donovan’s in a national team locker room is one of the surprise developmental success stories of the decade.

It also casts ropes of shade on how, exactly, America’s skeletal professional scouting network identifies its best players at a young age.

Ibarra spent his high school career in his hometown of Lancaster, California on the outer reaches of Los Angeles County, shielded from view by the 65 miles that separate it from the nearest Development Academy headquarters. He spent his college career bouncing from a JuCo to UC Irvine, where he registered on MLS’ periphery as a prospect that only stuck in a league preseason camp for a month. Finally, he ended up on an NASL roster in a league most figured was outside the purview of U.S. Soccer’s influence.

After nearly a decade of being overlooked for being too small or too far off the radar, both literally and figuratively, the 24-year-old Ibarra is finally planting his flag in the ground. He has 14 goals and 13 assists for Minnesota United since joining the team in 2012, and his explosive play this season - he has eight goals and five assists in 2014 - earned him minutes for the U.S. men’s national team in a recent friendly against Honduras.

Not bad for a kid who was criticized for his slight build for nearly his entire career.

“I was always told I was too small,” Ibarra said. “I never really paid attention to that. I just kept making sure I played with a lot of energy where I was at. You can see that they’re looking at bigger, stronger guys, but in my case I always just made sure I was getting better at whatever my best abilities were.”

Los Angeles is a notorious spiderweb of roadways, but there’s really only one route from the bustling heart of the city to Lancaster. The 210, 5 and 405 all converge just south of Santa Clarita, where the route splits between the 5 and the Antelope Valley Freeway, which plunges into the shrub lands of the Mohave Desert. The latter winds around the western edge of the San Gabriel Mountains until it runs through Palmdale and then Lancaster. Ibarra’s home.

Ibarra is a gap player who came of age in the midst of the Development Academy foundation. It didn’t exist until just before his senior year in high school, and even after it was founded, Ibarra was too far removed from its scope to know much about it. In fact, he never participated in any national identification camps on any level. He plied his trade with local Antelope Valley club squads, which play in the regional Coast Soccer League.

Even now, the closest Development Academy side to Lancaster is Woodland Hills-based Real So Cal, a 65-mile drive south. That wasn’t feasible for Ibarra, who didn’t get a single college offer out of high school on any level as a result.

“I was kind of in the middle of nowhere,” Ibarra said. “I had no idea of any big clubs or ODP or anything like that. I never really went through that way. I just stayed at my local club and started from there.”

Ibarra had friends he’d played with in high school who ended up on the men’s team at Taft College, a small JuCo some miles north in Bakersfield. They’d advised Taft coach Angelo Cutrona to scout Ibarra, who had no options on the table as a senior in Lancaster. When Cutrona showed up and talked to Ibarra for the first time, the conversation shocked him.

“It was hard. The only reason I went to community college is because I had friends that went to that community college, and they were telling the coach to scout me because they thought I was good and could play,” Ibarra said. “(The Taft coach) thought I was talking to DI schools, and I told him, no, I haven’t talked to any schools, actually. And he was kind of shocked.”

Ibarra raised his profile during his two years at Taft, guiding the program to the title game his first season and landing on a few DI radars for the first time. Virginia Tech and Cal State Fullerton both knocked, but a connection with Carlos Aguilar, who’d made the jump from Taft to UC Irvine, helped grease the wheels. For the next two years, he starred as an Anteater, which afforded him enough capital to land on a few MLS radars.

It was not enough, however, for him to be taken higher than 65th overall by the Portland Timbers in the 2012 MLS SuperDraft.

“I just knew there was a possibility of me getting drafted, I just had no idea by who,” Ibarra said. “It was kind of a shock when I actually got drafted, but I had no idea who were the people that were interested.”

Ibarra emerged from a conference that featured Luis Silva and Sam Garza, but he didn’t make it beyond the Timbers’ preaseason. Cut free in March of 2012 - coach John Spencer told Ibarra he nearly made the roster - Ibarra spent just a week at home in Lancaster before he was on the move again. Then-Timbers assistant Amos Magee had reached out to best friend Manny Lagos, the coach of the NASL’s Minnesota United, which was in preseason preparation. Would he happen to have time for a trial?

“When we got out here and got to know Miguel, very quickly we saw something in terms of his energy and effort and quickness that was unique,” Lagos said. “But the bigger selling point was the kind of person he was and the kind of attitude he had. Very quickly you could see it was a kid who wants to get better and wants to be a great pro.”

Despite its circuitous nature, there’s something decidedly American in Ibarra’s meandering path. That, it seems wasn’t lost on Jurgen Klinsmann, who hasn’t been shy about reaching into the shadows to conjure national team players. In September, Stanford’s Jordan Morris became the first college player to reach a senior national team camp since Chris Albright in 1999.

Ibarra’s call-up to the national team camp hadn’t come entirely out of the blue. About four months ago, U20 coach and senior team assistant Tab Ramos rung up Lagos. The two old teammates caught up on a variety of topics, but the conversation eventually circled back to scouting. Specifically, Ramos had questions about Ibarra and goal-scoring teammate Christian Ramirez, which led to more talks and, eventually, an in-person scouting presence in the ensuing months.

Ibarra knew there were national team scouts occasionally frequenting Minnesota United games, he just didn’t know who they were watching. That was until Klinsmann shot him a phone call.

The question didn’t hang for long.

Ibarra remembers walking into the locker room for the first time and seeing his No. 9 jersey hanging in the stall. He was awed, and that was even before he shifted his vision to his right. The locker next to his belonged to Landon Donovan, the No. 10, who was playing his last game in a national team jersey in the team’s first of two friendlies against Ecuador. And there was Donovan.

The two exchanged pleasantries, and Donovan asked about Lagos, who Donovan knew from earlier in his career.

“At the end he said that I’d been playing really well this season and to make sure I keep it up,” Ibarra said. “That I didn’t need to be nervous and to play like I have in Minnesota and I’ll be just fine.”

Ibarra didn’t play with Donovan, but he did get his first national team cap on Oct. 14 with a late appearance against Honduras in the ensuing game. Ibarra said he won’t likely forget the moment in practice the day before the game when Jozy Altidore told him he’d be playing the next day. He said the entire week was like something out of a dream.

What happens next, though, is unclear. The day after the Honduras game, Klinsmann expressly told Ibarra to put everything other than the conclusion of Minnesota United’s season on the backburner, including potential moves to other clubs. With the NASL playoffs just around the corner, it’s advice Ibarra took to heart.

Still, whatever Ibarra’s market value was earlier this year, it likely spiked considerably once he pulled on a national team jersey.

As for his developmental past, Ibarra recognizes it didn’t follow any preset pattern, and he’s largely left the question of whether the system could’ve done more to find him up to posterity. For now, he’s simply enjoying the ride, off-beat though it may be.

“Everything caught me off guard,” Ibarra said. “Everything that’s been happening is amazing. We’re doing really well in season, getting ready for playoffs. I had that national team call-up, which was a really great experience. Everything’s been amazing so far.”