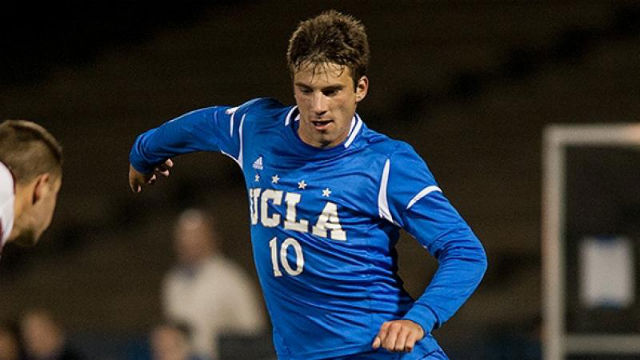 The 2014 MLS SuperDraft wrapped up on Tuesday, so the attention already shifts to 2015 for scouts. It’s over a year away, but the best franchises already have started their homework for the next draft class.

Here is a preliminary list of some of the top prospects for the 2015 draft class. 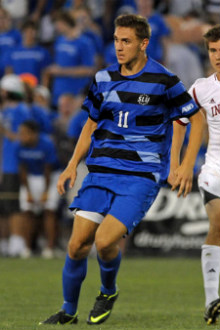 M Leo Stolz, UCLA – Perhaps he would have been the top pick in the 2014 draft, but the German midfielder decided to return to school and finish his education. If he continues to play at the level he showed in 2013, he will remain on the radar for the lowly teams in MLS. He is a more talented version of Dillon Powers, which should have some fan bases excited for the next draft.

M Nick Besler, Notre Dame – While Harrison Shipp dominated the headlines during Notre Dame’s run to the national championship, Besler did much of the dirty work in winning the ball back and distributing it to the playmakers. His skill set and vision is similar to Will Johnson.

F Sagi Lev-Ari, Cal State Northridge(m) – The dominant striker has been among the nation’s leaders in scoring for the past two seasons. He is impressively strong and can easily hold defenders off the ball. With 31 goals in two seasons with the Matadors, Lev-Ari has proven he is a consistent scorer at the Division I level.

F Robert Kristo, Saint Louis – American Soccer Now reported that Kristo was interested in entering the 2014 draft, but it did not work out for the forward. If he stays in school for another year, Kristo will be one of the top targets for 2015. He is similar to Lev-Ari in his physique, but there is a bit more flair to Kristo’s game. He is still going to be a valuable target forward at the professional level.

GK Spencer Richey, Washington – If Richey comes back fully fit and takes over the top spot in the net for the Huskies again, he will be the top goalkeeper in this class. However, it is still a long road between here and that point for the former U17 MNT keeper after a freak injury derailed his 2013 season.

D Anthony Manning, Saint Louis – The athletic center back from Saint Louis could transition to outside back or defensive midfield at the MLS level. He is smooth on the ball and clean with possession. He could be a sneaky target to quickly climb up draft boards this fall.

D Oumar Ballo, UMBC – A 2013 All American, the 6-foot-2, 190 pound center back can cover ground, is capable enough on the ball and has the marking ability to transition to the next level. Seeing two teammates drafted this year should mean that he’s already familiar to MLS scouts, but he’ll need to have a monster year to remain among the top prospects.

D/F Saad Abdul-Salaam, Akron – A marauding, attacking right-sided player (either as a right back or in the midfield) Abdul-Salaam’s size and athleticism are obvious assets that could translate well into MLS. He’ll get the chance to prove himself in the fall after the Zips lost five starters.

D Dennis Castillo, VCU – Another right back prospect who has developed well at the rising Richmond program, Castillo has the tools to make the jump to the pros right now, though the Costa Rican will have to wait another season to get his look.

F Adam Montague, Michigan State – A forward with a large frame (6-foot-3, 185 lbs), Montague battled through injuries in 2013, finishing the campaign with 5 goals and 6 assists. He’ll need a big year in the Big Ten in order to solidify his status, but he does a lot of things coaches and scouts will love.

F Cyle Larin, Connecticut – The league made a heavy push for the forward from UConn ahead of the 2014 Draft. And while they failed, there’s every reason to believe Larin will be looking to go pro again next fall. Provided he stays healthy and enjoys a solid campaign, MLS will come knocking once again. After all, big strikers with soft feet are hard to come by.

M Cristian Roldan, Washington – A creative force in the midfield for Washington’s successful 2013 team, Roldan is a star in the making and will look to play an even bigger role this coming season. The Huskies are scheduled for a trip to Scandinavia this summer, which will also allow Roldan to get reps in front of European clubs.

M Omar Holness, North Carolina – A tremendous athlete, the Jamaican Youth National Team is box-to-box center mid who can cover huge swathes of the field. If he can show more consistency in 2014, he’ll be in the running for a GA deal.

D Joshua Yaro, Georgetown – In his first season in the college ranks, Yaro stepped into a center back role for the Hoyas, starting and playing in every minute when healthy. He’s probably more suited to play as an outside back at the pro level but Yaro could be a GA candidate with another strong season.

F Romario Williams, UCF – The attacker did not catch much buzz on the national scope in 2013, but he quietly had a pretty nice season for the Knights with 10 goals and two assists. Williams is another in the growing trend of Jamaican players looking to make the jump into MLS after brief stints in college.