Here’s a look at some of the top performances from seniors over the past week:

MF Jose Altamirano, San Diego State: Altamirano and the Aztecs open the season on Friday with a road game against Notre Dame.

MF Carlos Alvarez, Connecticut: The attacking midfielder played 90 minutes in a 1-0 win over St. Francis on Friday. Alvarez ended the night with one shot on goal.

MF Kyle Bekker, Boston College: Missed the first game of the season due to injury, but was back in the starting lineup for their second game, a 1-0 loss against cross town rivals Boston University.

GK James Belshaw, Duke: The senior shot-stopper showed his quality despite losing 1-0 to the Irish, as Belshaw made seven saves to keep his side in it for almost the full 90 minutes. 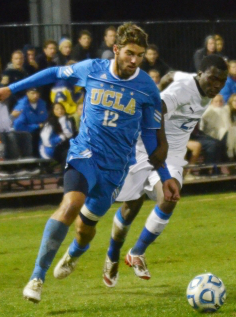 F Ashton Bennett, Coastal Carolina: The goal scoring sensation opened up the season as you’d expect, with two goals and an assist against Longwood. He couldn’t find the back of the net against Charlotte.

D Steve Birnbaum, California: Did not play in Cal’s 2-1 win over Santa Clara to open the season.

F Julian Cardona, Penn State: Four goals in the first two games of the season from Cardona will likely raise some eyebrows across the league. The 5-10 forward only scored four goals all last season, so keeping up this torrid pace may be the question.

D Greg Cochrane, Louisville: The two-footed left back put in an active shift over 90 minutes in a 3-0 loss to Maryland. Provided plenty of energy down the flank and a couple of decent crosses.

MF Machael David, UC Santa Barbara: With junior Fifi Baiden locking down the defensive midfield position, Tim Vom Steeg and the UC Santa Barbara coaching are playing David as a right midfielder. During Saturday’s 2-1 win over Loyola Marymount, David looked a bit uncomfortable with his spot on the wing.

MF Paolo DelPiccolo, Louisville: The physically imposing DelPiccolo had an uneven performance in the center of the park for the Cardinals in the loss to the Terps.

MF Jose Gomez, Creighton: The orchestrator of brilliance for Creighton put in an 80-minute shift in the 3-1 win over Northern Illinois on Friday.

D Brock Granger, Louisville: It wasn’t a good night for anyone on the Louisville back line, although Granger showed flashes of his abilities in his shift against the Terps.

MF Ryan Hollingshead, UCLA: Scored a great goal with his head against New Mexico in the opening game. Faces a big challenge this week with road games against Maryland and Virginia.

D Taylor Kemp, Maryland:  The enterprising left back played nearly every minute for the Terps in the 3-0 defeat of Louisville. Kemp got forward well and sent in a couple of good crosses, although he did miss some time as he continues to battle a nagging hip injury.

D Kory Kindle, CSU Bakersfield: The outside back from Southern California was excellent in the Roadrunners season opening 0-0 draw against Bakersfield on Monday. However, the Aggies rarely made him work defensively, and left Kindle with space to run at them.

M Jonathan Mendoza, Stetson: Mendoza and the Stetson attack was shut down in losses to Penn State and West Virginia over opening weekend.

D Tommy Muller, Georgetown: The center back showed his quality in two wins, his experience and defensive ability on displaying as the Hoyas beat Virginia and Florida Gulf Coast(m).

D Jimmy Nealis, Georgetown: Teams love left-footed defenders, and Nealis has all the attacking qualities coveted in a left back. He played 90 minutes in both of Georgetown’s wins.

MF Leston Paul, South Florida: The Trinidadian contributed two assists in the 2-1 win over Michigan on the nationally televised Fox Soccer Game of the Week. Paul has experience at the international level with appearances for the Trinidad and Tobago youth national teams. (NEW NAME)

D Everett Pitts, UC Irvine: Played the full 90 minutes in 2-0 victory over San Diego. Pitts and the rest of the Anteaters defense limited the Toreros to three shots on goal.

MF Dillon Powers, Notre Dame: The midfielder logged 84 minutes and was credited with an assist on Finley’s goal.

MF Andrew Ribeiro, Creighton: The Creighton captain has his penalty kick saved late in the 3-1 win over Northern Illinois on Friday.

MF Nik Robson, New Mexico: The New Zealander had good moments for the Lobos in the opening game of the season, but the consistency is lacking at this point. Robson transferred into New Mexico over the summer, so familiarity may be the issue at this point.

F Devon Sandoval, New Mexico: Sandoval was a nightmare for the UCLA defense on Friday. With his physical play and smart runs, the striker contributed two goals and as assist in a 3-2 win for New Mexico. (NEW NAME)

D Eric Schoenle, West Virginia: The lanky center back started both of West Virginia’s wins over the weekend, with victories over Hartford and Stetson.

F Blake Smith, New Mexico: The shifty forward scored a goal in the Lobos’ 3-2 win over UCLA on Friday. Beyond the stats though, Smith displayed a great change of pace and some nifty footwork in tight spaces. (NEW NAME)

F Yannick Smith, Old Dominion: Sat out the season opener against Navy due to injury, but close to making his return according to reports.

MF John Stertzer, Maryland: Scored a goal and played every minute of the Terps’ 3-0 win, covering plenty of ground along the way. Picked up ACC Player of the Week honors.

F Emery Welshman, Oregon State: A goal and an assist for the Canadian in the 4-0 against Sacramento State on Friday.

F Paul Wyatt, James Madison: JMU’s offense struggled in their opening weekend, and the team dropped two straight games over the weekend as Wyatt couldn’t help the team find the back of the net.