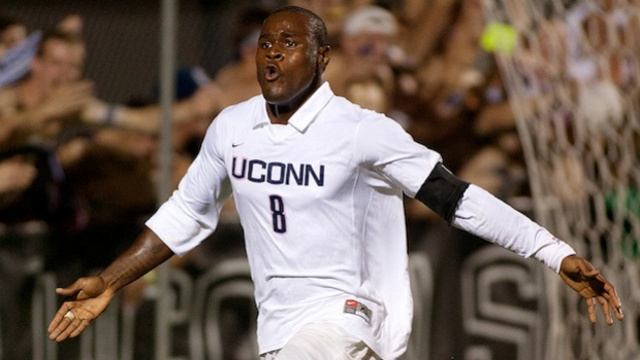 MF Carlos Alvarez, Connecticut: Continued to power the UConn attack, as he scored two goals in a 3-0 win over St. John's over the last weekend, before notching two more assists as the Huskies remained undefeated thanks to a 2-0 defeat of Yale.

F Will Bates, Virginia: Logged heavy minutes over the past week, going 90 in a 1-0 loss to North Carolina, before playing 102 in a 1-0 win over VCU.

MF Kyle Bekker, Boston College: The attacking midfielder was in the starting lineup for a pair of wins, but failed to get himself on the scoresheet.

GK James Belshaw, Duke: Belshaw had his three-game shutout streak snapped in a 2-1 loss to UNC Wilmington on Tuesday night as he continues to hold the back line together.

F Ashton Bennett, Coastal Carolina: The speedy forward has been relegated to the bench, and failed to find the back of the net once again in a pair of wins for the Chanticleers.

F Julian Cardona, Penn State: Did not have an impact on offense in either of the Penn State’s games last week. Cardona has five goals and one assist this season. 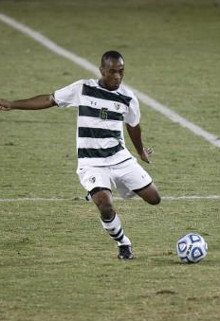 D Greg Cochrane, Louisville: After starting the season as a left back, Cochrane has been moved up to midfielder where he’s been contributing more to the Cardinals offense. The results have been telling, as Cochrane has shown off his versatility.

MF Machael David, UC Santa Barbara: And the nagging question about his durability has surfaced again. David missed most of the UCLA game on Friday and all of the Harvard game on Sunday due to a muscle injury he picked up in the draw against the Bruins. MLS scouts have to be slightly concerned about his inability to stay on the field over the last couple of seasons.

F Ryan Finley, Notre Dame: Continuing to come on as a substitute, Finley scored a goal from the penalty spot in 71 minutes of action as Notre Dame fell to Louisville.

MF Jose Gomez, Creighton: Disastrously miscast as a striker in Creighton’s new look, which has resulted in back-to-back defeats. Gomez is a midfielder, and the sooner he takes over control of the game for the Jays, the better.

MF Ryan Hollingshead, UCLA: The Hollingshead bandwagon is now full after last weekend. The UCLA captain put in two convincing performances against UC Santa Barbara and Cal Poly despite not putting his name on the scoresheet. Hollingshead covers more ground than most expect and he is so crafty with holding possession. He is playing like a mid first round selection at this point. Sporting Kansas City scouts have been hot on the trail of UCLA all season, and he would fit in well with Peter Vermes’ style of play.

F Hakan Ilhan, UNC Greensboro: He had four assists in the 4-0 win over Davidson last week to push his season tally to five goals and five assists.

D Taylor Kemp, Maryland: The left back sat out the last two games because of nagging injury problems.

D Kory Kindle, CSU Bakersfield: Scored twice in the 2-0 win over UC Riverside on Sunday. At this point, the homework for every MLS team should be done on Kindle. He can play at the next level and looks like the top outside back in the draft.

M Jonathan Mendoza, Stetson: After 15 days, Stetson finally returned to the field last week in a 2-1 loss to FIU. Mendoza had a couple of shots in the defeat.

M Fernando Monge, UCLA: The center midfielder scored twice over the weekend in similar ways. Monge rose above the defense on both situations and headed low to the far post. The MLS quality is there with Monge, but the position at the next level is still a question mark.

D Tommy Muller, Georgetown: Returned to the starting lineup against Rutgers on Saturday in a 1-0 win, but missed Georgetown’s Tuesday night game against James Madison as he continues to work through a leg injury.

D Jimmy Nealis, Georgetown: Remained in the starting lineup along the back, helping his team pick up a couple of shutout wins over Rutgers and James Madison respectively.

MF Dillon Powers, Notre Dame: The suddenly-reliable midfielder played 90 minutes in Notre Dame’s first loss of the season, a 2-1 defeat at the hands of Louisville.

MF Andrew Ribeiro, Creighton: Tuesday’s game against Tulsa exposed Ribeiro. Tulsa forward Cristian Mata was very physical with the Jays center back in the second half and knocked him off the ball a couple of times. Ribeiro has been thrown in at pretty much every spot for the Jays this season, but his MLS draft stock depends on him mastering one of those spots.

F Charlie Rugg, Boston College: Is the real Charlie Rugg finally here? The forward battled injuries early on in the year, but it looks like his season is finally getting on track. Scored two goals and chipped in an assist in BC’s last two games, both much-needed wins on home turf. He’ll need to get going against ACC competition in order to boost his stock.

F Devon Sandoval, New Mexico: The target forward for the Lobos continues to produce week in and week out. His athleticism might keep him out of the first round, but he has the makings of a solid pro.

F Blake Smith, New Mexico: With six assists on the year, MLS scouts are getting a better idea of just where Smith will fit in at the next level. He is a winger more than a traditional forward. He has the tools to make an impact at that position in MLS, but his defensive role may be a liability at first.

F Donnie Smith, Charlotte: Smith, along with the rest of the 49ers, was held scoreless against Elon in his lone game this week. Smith has two goals and one assist on the year.

MF John Stertzer, Maryland: The midfielder played 90 minutes in Maryland’s 2-0 win over Virginia Tech last week, and was given the night off in Monday’s 4-0 defeat of Georgia State.

F Chris Thomas, Elon: Eleven goals, two assists in eight games played. I’d say Thomas is on fire (NBA Jam style) at this point. The striker has accounted for 13 of the team’s 18 goals this season.

F Emery Welshmen, Oregon State: The TopDrawerSoccer.com Player of the Week has five goals in the last three games. The Canadian seems to be carrying the goal scoring load with sophomore Khiry Shelton still returning to fitness after an ankle sprain.

MF Ian Christianson, Georgetown (Chicago Fire, Senior): The anchor in Georgetown’s midfield started in two games over the past week, a pair of 1-0 wins over Rutgers and James Madison.

MF Dillon Serna, Akron (Colorado Rapids, Freshman): Assisted on Alfred Koroma’s opening goal against Bowling Green on Saturday. Serna is playing in a more advanced position now, which means the Akron attack is rolling and the Rapids product is picking up points.

D Matt Wiet, UCLA (Columbus Crew, Senior): Perhaps he would be better cast as an outside back at the next level. Wiet is undersized for a center back, but he is intelligent and strikes a ball cleanly with either foot.

MF Collin Martin, Wake Forest (D.C. United, Freshman): Started and scored his first collegiate goal as the Demon Deacons cruised to a 4-0 win over Appalachian State on Tuesday evening. Martin also came off the bench in a 0-0 draw against Duke.

D Mikey Ambrose, Maryland (FC Dallas, Freshman): Continued to start at left back with Taylor Kemp sidelined with an injury, and picked up a goal in a 2-0 win over Virginia Tech last week with an impressive blast from outside the area.

D London Woodberry, Maryland (FC Dallas, Senior): The center back remains a picture of consistency for the Terps, playing all 180 minutes in a pair of wins over the past week, both shutouts.

D Bradley Bourgeois, Tulsa (Houston Dynamo, Freshman): The center back has been a revelation for Tulsa this season with a number of strong performances for the suddenly resurgent Golden Hurricane program.

F Gyasi Zardes, CSU Bakersfield (LA Galaxy, Junior): Had two assists in the 2-0 win over UC Riverside on Sunday. With Zardes back to fitness, the Roadrunners are rolling and ready to contend for the MPSF title.

F Brandon Allen, Georgetown (New York Red Bulls, Freshman): His strong first year in the college game continued over the past week, as Allen scored the game winning goal in overtime in Georgetown’s Big East opener against Rutgers, before assisting on the only goal of the game as the Hoyas knocked off James Madison on Tuesday evening.

F Sean Okoli, Wake Forest (Seattle Sounders, Sophomore): Made a couple of starts over the past week, and found the back of the net off a rebound as Wake Forest trounced Appalachian State 4-0 on Tuesday night.

D DeAndre Yedlin, Akron (Seattle Sounders, Sophomore): Played every minute in the 2-0 win over Bowling Green. The speedy outside back will have plenty of chances to get his name on the scoreboard with the start of conference play.

F Allando Matheson, Connecticut (Toronto FC, Freshman): Gave the Huskies a lead they would not relinquish on Tuesday night, helping engineer a 2-0 win over Yale. Continues to supply a spark plug from off the bench.