The New Mexico Lobos pulled off the double in 2011 with a league and tournament title in the Mountain West Confernece. Will anyone be able to stop the favorites in 2012?

Wyoming and San Diego State both look likely to give the Lobos a run for their money this fall. Also, new addition Fresno State could sneak up on a few teams.

The Lobos are the bullies of the Mountain West. Kit Vela’s group has not lost a conference game since 2009.

Vela has 11 new freshmen on the roster in 2012 to replace the seven she lost from last year’s squad. The Lobos have recruited well in recent years, so there is no expectation that the drop-off will be that great this fall.

Losing Jennifer Williams (14 goals, 3 assists) and Jael Fanning (2 goals, 10 assists) will hurt, but there are a number of players vying to replace them in the starting lineup. 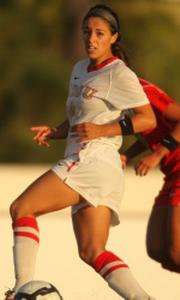 Aztecs head coach Mike Friesen is in his sixth year in charge in San Diego, but he is only familiar face left on the coaching staff. Friesen brought in three new coaches during the offseason, and while the philosophy or style won’t change too drastically for San Diego State, it could add a new dynamic to the sideline.

Despite finishing second, San Diego State was tied for third in the conference for goals scored and goals conceded. The Aztecs claimed the results when it mattered, but both sides of the ball need to improve in 2012 if Friesen and company want to challenge New Mexico at the top.

Look for freshman Victoria Barba to help right away. The New Mexico native is expected to fill the attacking midfield position this fall.

After winning the 2011 Mountain West Coach of the Year award, Danny Sanchez packed up his bags and left Wyoming to take over at Colorado.

Now, Pete Cuadrado is in charge of Wyoming and looking to build off the most successful season in the program’s history. Cuadrado was previously successful with North Dakota State, so he is not going into this position wet behind the ears.

Working in his favor is the return of Mountain West Freshman of the Year Sara Paul. The talented Canadian scored eight goals and added four assists to lead the Cowgirls in 2011.

Cuadrado went to the Paul well again and added Sara’s younger sister Jennifer to the squad for this fall. Jennifer is also a forward, so the Paul combination up top could be one to watch in the future in Wyoming.

Wyoming is not the only program going through a coaching change. Michael Coll is the new man in charge of the Rebels in Las Vegas.

Coll is a former assistant coach at Penn State and inherits a much younger roster than his colleague at Wyoming. The Rebels enter 2012 with 10 freshmen and a hole to replace with leading scorer Katherine Orellana’s graduation.

Boise State head coach Steve Lucas made it clear that his team will continue to play the same way in his opening remarks from the first practice of the season earlier this week.

Lucas wants his group to hold onto possession of the ball, but also speed up the play. With eight seniors on the roster, this is going to be a veteran group that should be able to implement Lucas’ style.

McKenna Fox was outstanding in her debut season with the Air Force Falcons. The midfielder from Utah scored seven goals and dished out three assists in 19 games.

After going 2-15-1 in his first season in 2009, head coach Larry Friend continues to guide this team in the right direction.

The Wolf Pack struggled in its final season in the WAC with a 1-6 conference record. Perhaps, the new opponents of the MWC will be just the change that the Nevada program needs to get back on the right track.

Head coach Dr. Melissa Price is in her third season in charge of the program, and looking to capitalize from the experience on the roster.

The Bulldogs of Fresno State are one of the new faces in the conference, but they are also a team to watch out for in the MWC.