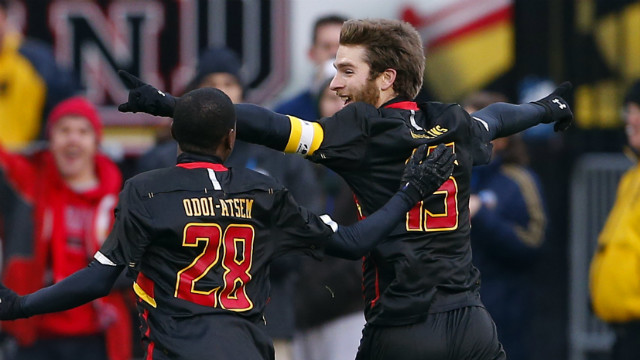 CHESTER, Pa. — When searching for a sequence on the field that best sums up Maryland forward Patrick Mullins as a player and a person, look no further than the first half goal he scored in Sunday’s College Cup loss. 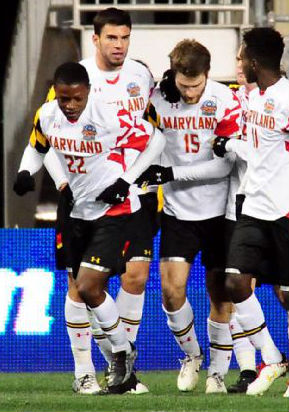 Mullins (No. 15) celebrates with teammates.

After Alex Shinsky had his shot blocked off the line by an Irish arm, Mullins pounced, controlled the ball and instinctively lashed home to open the scoring in a split-second. It was vintage Mullins – turning a half-chance into a goal and punishing a defensive mistake.

It was only after the game that he admitted to controlling the rebound with his hand during the "crazy play," making it a sorrowful moment for the Terp when recounting his goal. Instead of piling into the ref for missing the preceding handball, Mullins looked close to tears as he confessed, a rather startling turn of events that reflects the player’s character.

“All I can control is my actions, and I’m not happy with that action,” he said. “It’s definitely hard for me to swallow because I don’t think that’s the type of player I am. Obviously the referee is a great referee, and I’m sure he’ll look back unfortunately on that play, too, because it was just a lot of plays that I’m sure players and refs will want to take back. I will regret that one for the rest of my life, but I’ll move forward. People make mistakes.”

Said head coach Sasho Cirovski: “It affected him a lot after that moment. We had some good talks. I think he tried to push through, and I think he did push through in true Patrick Mullins fashion.”

Handball or not, Mullins certainly earned the respect of Sunday’s opponent.

“He is an unbelievable handful to take care of out there,” Notre Dame defender Andrew O’Malley said. “He can do all things, check to the ball, he can try and beat you over the top. In the box, he’s a shark going after the ball getting goals as you saw with the one off the corner.”

After the final minutes ticked off the clocked with the Terps trailing 2-1, it officially ended Mullins’ career in college soccer. Set to graduate in December, he once again missed out on a national title – the only honor, team or individual, he leaves College Park without accomplishing.

He also exits as the program’s second leading goal scorer of all-time, with 47 goals (including 36 the past two seasons) and 25 assists, and second in total points. Cirovski said he was “up there” with Taylor Twellman and Jason Garey as one of the best forwards Maryland soccer has seen.

“That’s three pretty amazing forwards and three special human beings,” Ciroski said. “Taylor’s the all-time scorer per games played in MLS, Jason Garey obviously was one of the great college players and had his career cut short by injury. Patty’s a little different; Patty can play a few different places than up front, he can go out wide. Those two had to be up front, true No. 9s. Patty can shift out wide and can be a provider and a finisher. I wouldn’t say Taylor or Jason were providers, they were finishers.”

Last year, after Maryland’s crushing defeat on penalty kicks against Georgetown ended his season in the national semifinals, Mullins had the opportunity to sign with Major League Soccer and forego his senior season for a pro career. He obviously made the decision to come back, one he never regretted for a second.

He feels that the four years in College Park has prepared him for the pro game, whether that’s in the U.S. or abroad.

“I think soccer wise, Maryland soccer has been the best thing for my career and my life,” he said. “I’ve improved tremendously over four years, and I get challenged every day. That’s exactly what I signed up for and that’s exactly what I got. I think the people that I encountered in my time made me into a great human being that is ready to move onto that next level. Some of the experiences I’ve had I’ll never forget.”

A possible No. 1 overall pick in January’s MLS SuperDraft, Cirovski has plans to make sure Mullins is permanently enshrined in College Park one day.

“When we build my stadium, we’re going to bronze a statue of him in the front because he’s made of the best stuff on Earth.”