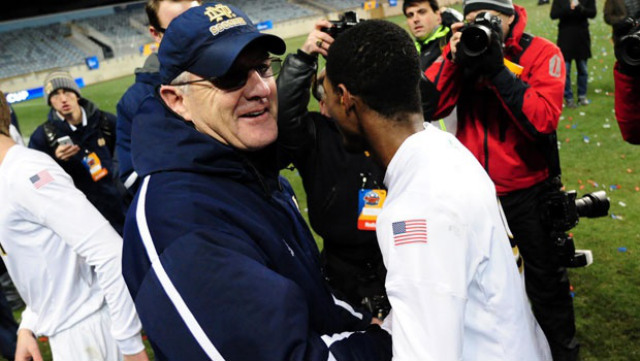 CHESTER, Pa. — In the end, Notre Dame proved themselves in the NCAA tournament, winning five straight games and coming through in close games to win this year’s title.

There were plenty of talking points from the game and the weekend overall. Here are three thoughts from the College Cup:

1. Dubious calls or not, Irish were worthy of their title

There’s no question that Notre Dame got a little bit of luck in the first half, when referee Hilario Grajeda didn’t see Patrick Hodan clearly extend his elbow/arm to keep out a goal-bound Alex Shinsky shot. Looking at the replay, his arm extends away from his body to keep the ball out – if the ref sees it, there’s little arguing that it’s not a red card and penalty situation. The bang-bang nature of that play definitely makes it a very tough call to make. 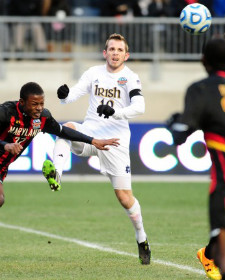 That Patrick Mullins scored during that sequence is of little matter, as the correct call would have reduced Notre Dame to ten men, making a victorious outcome all the more unlikely, even if Mullins missed the PK. That’s not even mentioning the other handball of question in the second half.

However, on the day, and when looking at the Irish season as a whole, they were the clear No. 1 team in the country, almost from day one, and certainly worthy champions. With just one loss on the campaign, Notre Dame was an experienced and unstoppable machine, guided offensively by midfield wizard Harrison Shipp, and backstopped by an experienced and gritty defense.

So while that moment certainly might have altered the game, it shouldn’t take away from a quality team’s accomplishment, as Notre Dame proved themselves more than just once to be the nation’s elite squad this season.

For the three years prior to his stellar senior season, Shipp was nothing more than a super sub for the Irish, entering this campaign with just four career starts in 60 appearances. Of course, he scored six goals and had six assists, and played more than 1500 minutes as a junior, clearly seeing the field for long stretches and making an impact.

But he was overlooked by just about every preseason list this year, including the Hermann Trophy watch list (as much as that means something) and this site’s preseason Top 100 list.

However, he quickly proved that he’s an exceptional talent, amassing 12 goals and nine assists in a starting role, and helping provide the leadership platform to push the Irish into the final hurdle. A silky smooth attacker who plays as if he has a magnet to the ball on his feet, he was one of the highlights of the College Cup, despite appearing slightly fatigued in the final.

He’s also a first team Academic All-American – with a 3.9 GPA in finance set to graduate this December – and if he elects to sign a deal with Major League Soccer and his hometown Chicago Fire, is likely taking a pay cut over a lucrative job in his field.

While there was some entertainment value and drama in Sunday’s final, the level of most national finals is never quite at the same heights as Friday night’s games. Because of the short layoff, most championship games are played on tired legs, and the Irish win was no exception.

Both teams resorted to playing on the flanks for long portions of the game, sending in cross after cross into the box, looking for knockdowns and to score on set pieces, as the Irish obviously did.

“It wasn’t the prettiest game,” he said. “I think it’s hard to play two games of that intensity in a period of two or three days, but I thought both teams put in a good shift.”

It’s always somewhat unfortunate that this stage of the season garners the most attention – and it’s understandable of course – but there is a lot more quality, attacking soccer on display during the regular season as teams can obviously take more risks.