The start of the women's college soccer NCAA Tournament is upon us with the first round kicking off on Friday at 32 campuses across the nation.

Below is a breakdown of some of the games to watch this weekend with an upset special also highlighted. 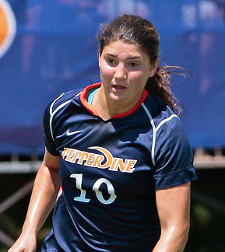 This is a rematch from earlier in the season where UCF emerged victorious 1-0 behind a goal from Nicolette Radovcic in overtime. Saturday’s meeting will likely be just as tight between two very strong teams.

The Knights are a strong team defensively and held Miami (FL) to only one shot on goal in the first meeting in August. Entering the NCAA Tournament, UCF ranks fourth in Division I in shutout percentage with 15 shutouts in 22 games.

The Hurricanes are no slouch in defense either - the Atlantic Coast Conference program ranks 10th in Division I with 11 shutouts in 19 games. The part that has derailed the Miami season is the players in the training room and not on the field.

Miami has been without eight starters at points of the season. Perhaps the almost two weeks off between games will be enough for Miami to integrate some players back into the lineup and pull off a win on the road.

Fun stat about Rutgers head coach Glenn Crooks, he is 4-0-1 in first round of the NCAA Tournament. It may be three years since the last time the Scarlet Knights went dancing, but you can pretty much bank on Crooks leading his women into the second round once they are there.

Colgate will offer a good challenge though with an offense that scored 47 goals in 20 games this season, which ranked in the top 20 in Division I. The defense is what carried the squad into the postseason though.

The Patriot League Champions defeated favorites Navy 1-0 in the title game behind a six-save performance from senior goalkeeper Ashley Walsh. She will need a similar effort to slow down the Rutgers attack on Saturday.

Arguably the most competitive game of the 32 fixtures from the first round, the Waves host the Bears on Saturday in matchup of two California programs.

The Bears enter the postseason on a bit of a sour note with only one win in their last three games and only one goal scored over that period while letting in four. The Waves have not fared much better with a 2-2-0 record in its last four, which eight goals let in during that stretch.

The Saturday contest will feature two seniors who perhaps do not get enough attention on the national stage.

California senior midfield Betsy Hassett has been one of the most consistent players in the Pac-12 this season. The New Zealand international has used her experience to guide this Bears midfield into the postseason.

Pepperdine senior forward Anisa Guajardo has a knack for finding the back of the net. The striker capped off her regular season with 10 goals and eight assists, which pushed her career tally to 27 goals and 14 assists.

Baylor head coach Marci Jobson bit her tongue when she was asked about going on the road in the first round as the #3 seed in the bracket.

"I think this team has dealt with adversity all throughout the season," Jobson said in a release. "At this point it is what it is. We are going to deal with it and focus on preparation for Arizona State."

The main reason why this game will be close is because it is on the road so Jobson has a legitimate excuse for her frustration. Her Baylor squad is 9-0-0 at home this year with only three goals conceded. On the road, the Bears are still strong (5-1-4), but have been forced into a lot of overtime games.

Winning four straight games to end the season is probably the main reason Arizona State snuck into the postseason, and now the young Sun Devils play host to one of the top teams in the nation.

An upset is a long shot, but the Pac-12 program could keep this close.