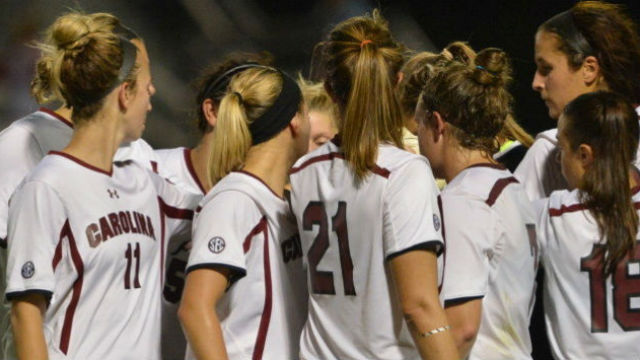 As most college students head home for Thanksgiving break, some of the best women’s soccer players are right where they want to be: battling it out for a spot at the College Cup next week in Boca Raton, Florida.

Preview all four matchups below.

The only matchup of the quarterfinals that isn’t a 1 vs. 2 seed, the Gamecocks march into Tallahassee after scoring one goal in three tournament games. A 1-0 win against North Carolina is certain to have the team brimming with confidence ahead of a tough, tough matchup against Florida State. Center back Taylor Leach will return to the starting lineup after missing the third round meeting with North Carolina due to a red card suspension, though All American goalkeeper Sabrina D’Angelo is expected to miss this game again, leaving the door open once again for freshman netminder Abbey Crider. To have a chance in this one, the Gamecocks need a big game from someone in the final third, whether it’s Raina Johnson, Sophie Groff, Savannah McCaskill or anyone else.

Of course, scoring on the Seminoles is no easy task. With only nine goals allowed on the season, the defense hasn’t missed a beat with Kristin Grubka guiding the back line and redshirt freshman Cassie Miller between the posts. Head coach Mark Krikorian’s possession approach continues to pay off in the knockout rounds, as it not only helps generate that defensive success, but it also opens up opportunities to a slew of attacking options. Dagny Brynjarsdottir has a legit shot at a Hermann Trophy with her 16 goals topping the team’s scoring charts. But what makes the Seminoles so dangerous offensively is the vast array of players who can pop up and score goals, from the inconsistent yet threatening Cheyna Williams or bench sparks Berglind Thorvaldsdottir and Marta Bakowska-Mathews. Add in the long throw capabilities of Megan Campbell, and it’s no wonder the program is on the cusp of a fourth straight College Cup appearance.

The unstoppable force meets the immovable object, as Virginia’s top-ranked offense tries to do what so many teams have failed to do this season: score a goal against UCLA. It’s been a record-shattering campaign for the Pac-12 champs, as goalkeeper Katelyn Rowland has set season marks with 19 shutouts, and also a new record for career shutouts to boot. There are few weaknesses up and down the UCLA roster, as the spine of Sam Mewis, Sarah Killion and Abby Dahlkemper makes it nearly impossible to breakdown. A lack of a premier forward hasn’t been an issue as Kylie McCarthy emerged down the stretch as a starting option, while Taylor Smith, Rosie White or Darian Jenkins can make game-changing plays up front. Mewis has enjoyed her best season to date and is arguably the Hermann Trophy favorite.

Speaking of Hermann Trophy candidates, UCLA matches up against a Virginia side that has not one but three sensational players. Morgan Brian, Danielle Colaprico and Makenzy Doniak have led a scintillating tournament run thus far, a dominating offensive effort that has outscored the opposition 18-0 in three tourney games, an output that has seen UVA overtake last year’s phenomenal side in total goals with 83 on the season. The one knock on this team is the lack of a tough enough schedule that’s resulted in this quarterfinal matchup. The Cavaliers’ toughest games, outside of a pair of losses to Florida State, came against a North Carolina side they were able to brush aside in the ACC semifinals. On the flip side of it, there’s an argument that UCLA hasn’t faced a team as good offensively as this Virginia side is, one that is more than capable of punishing mistakes at the back – not that the Bruins are prone to that of course. Regardless, this game should prove to be a classic encounter, and one that will live on in college soccer lore, similar to the epic 2013 College Cup encounter.

The lone quarterfinal meeting that’s a rematch of a 2014 clash, Florida makes its second trip to Palo Alto looking for a first College Cup appearance since 2001. The road ahead is going to be difficult against a Cardinal side that is back on the national radar, and then some, after a somewhat down 2013 campaign. Stanford has gotten this far because they can win in just about any way. They have the offensive punch that can carry a team to victory behind the likes of Lo’ea LaBonta, Taylor Uhl and Chioma Ubogagu, or they can beat you 1-0 like they did in the second and third round, as center back Laura Liedle and Maddie Bauer, with freshman standout Andi Sullivan shielding the defense from her holding midfield spot. That’s without mentioning U.S. youth standout goalkeeper Jane Campbell excelling between the posts as well. LaBonta only played 14 minutes in the previous encounter, so perhaps that can help to be the difference this time around.

The similarities between the two teams are fairly straightforward. Both like to possess the ball and work it through the midfield, and for Florida, forward Savannah Jordan and midfielder Havana Saloun must be able to find time and space in order to have a chance at this one. Christen Westphal should be able to help the team cope with Stanford’s offense, while Tessa Andujar can make plays from the flank. Jordan must be on her game for the Gators to advance, as they’ll get at least a chance or two in front of Campbell’s goal – but they must make it count, because there won’t be many.

Rounding out the quarterfinal field is another top, top matchup between two of the best teams this year. Head coach G Guerrieri has the chance to make the College Cup for the first time in program history, and he has the team that can make it happen. Senior leadership is key at this stage of the season, and A&M has that in spades, all over the field: from goalkeeper Jordan Day, defenders Meghan Streight and Leigh Edwards, to offensive weapons like Shea Groom, Annie Kunz, Kelley Monogue and Bianca Brinson. Monogue and Groom in particular have been excellent, combining for 33 goals and 17 assists between the two of them this season. They’ll need goals to advance as well, as the Aggies have conceded the most goals (23) of the eight teams currently alive, but that’s something they’ve done all year, scoring 68 in 2014.

The Nittany Lions are going to fancy their chances, even on the road in College Station. A sensational recruiting class has helped Penn State to this point, with four freshmen – Frannie Crouse, Emily Ogle, Elizabeth Ball and Maddie Elliston – playing very significant roles this season, playing more than 1200 minutes each and appearing in every game. But head coach Erica Walsh also has some serious upperclassmen leadership as well, with Mallory Weber, Raquel Rodriguez, Whitney Church and Kori Chapic looking to book a return trip to the College Cup after missing last year’s edition. Unlike other teams in the field, Penn State lacks a big-time goal scorer, but makes up with that by spreading it around, as 13 different players have all tallied this season. Expect to see plenty of goals in this one.