Thirty-two games take place over the next three days, as the NCAA tournament begins. And thanks to some, shall we say, interesting decisions by the selection committee, there are some huge matchups in the first round.

Below are the top five matchups from the first round (all times listed EST):

South Carolina’s reward for entering the field as a seeded team is a first round meeting with an ACC opponent. The committee strikes again.

Jokes aside, the intra-South Carolina clash is a good one, and like the Georgetown-West Virginia game, a rematch between two sides that played during the regular season. That game wasn’t pretty, as it featured seven yellow cards and 32 fouls between the two sides. 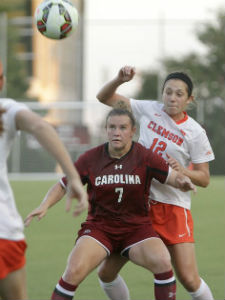 Now in a knockout tournament, it’s hard to know if this one will be any better, as it’s going to be a fierce contest between two quality teams. It’s a meeting between two quality Canadian goalkeepers, with Kailen Sheridan the custodian for Clemson, while her compatriot Sabrina D’Angelo is South Carolina’s netminder. With that quality and what’s at stake, look for a low-scoring affair with the likes of Gamecock freshman Savannah McCaskill or Tiger Catrina Atanda looking for the breakthrough.

Despite the close proximity of the two programs, Friday night’s matchup between the Explorers and the Scarlet Knights will be the first since 2001. Rutgers will know what to do to win this one: stop La Salle’s Kelsey Haycook. The Atlantic 10 Offensive Player of the Year accounted for nearly half her team’s goals (20 of 42) and can supply the goals needed to advance. Defender Kerri Aiken anchors a stout back line as well.

Head coach Mike O’Neill has done well in his first season in charge (he was previously associate head coach) to get the Knights through their transition into the Big Ten and into the tourney. The team’s recent form has to be of a concern, however, losing four out of their last five, failing to score in those defeats. Madison Tiernan and Stefanie Scholz will look to lead the attack back on track, while Erica Skroski and freshman goalkeeper are keys for a defense that allowed just ten goals in 19 games.

Like South Carolina-Clemson, this is a meeting of two teams that battled earlier in the regular season. Unlike those two, neither side emerged with the win on that day, as Georgetown drew 1-1 on the road with the Mountaineers.

Saturday’s encounter should be a good one, as it pits Canadian defensive stalwart Kadeisha Buchanan against senior Hoya maestro Daphne Corboz, who has already carved out a brilliant four-year career in the nation’s capital. Getting the better of a player as good as Buchanan is a chance for Corboz to showcase what she could do at the next level.

Should the Mountaineers survived this test, they’ve got some intriguing pieces that could result in a lengthy tourney run.

As my colleague Will Parchman noted, the clash of these two sides is a bit on the unfortunate side given how good of a campaign each side has enjoyed in 2014. Before getting to the match itself, it’s apt to note one more time that the Big East regular season and conference champs shouldn’t square off against the Big Ten tournament champs in the first round.

That aside, the game should be a delight for neutrals. Each side has a strong attack, quality defense, and experience in goal. The Badgers can hurt you from a number of different spots, with Kinley McNicoll, Rose Lavelle, Cara Walls and Kodee Williams are capable of doing damage. On the other side, the Blue Demons can count on a number of players to find the back of the net, as Elise Wyatt, Abby Reed, Amber Paul and Alexa Ben have all scored at least eight goals, and are a threat to carry DePaul past the Badgers and deep into the tournament.

The Cougars travel to Colorado with a point to prove, as this WCC vs. Pac-12 clash also represents a battle of the conferences. It’s hard to look past a Pac-12 program of course, as Colorado has played the likes of UCLA and Stanford, not to mention a number of tricky opponents in what has proven to be the best league in college soccer.

Cougar scoring ace Ashley Hatch is the one to watch here, as she’s knocked in 18 goals in 20 games as BYU rattled off 11 straight wins during the season. The Buffaloes enter this one winners of three in a row, which helped them land the at-large bid. Forward Brie Hooks, with goals in all of those wins, will look to help the Colorado attack keep pace with Hatch and the rest of the BYU offense.