Northern Virginia coach Richie Burke stated, “they played with more passion and commitment than did in the previous matches, but it was the least attractive match they played”.  I agree – Carolina was the better team – but soccer can sometimes be cruel.

Carolina Dynamo coach Marc Nicholls summarized it well, “he was disappointed with the result. Carolina had better possession, but they were not able to establish their rhythm”.  Again, I agree with this assessment. 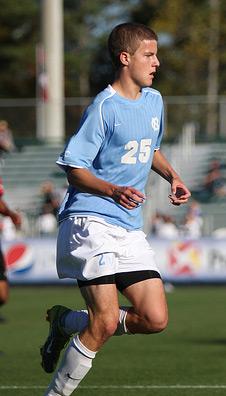 Robbie Lovejoy
In these past 2 games, I’ve become a big fan of Robbie Lovejoy (North Carolina). He makes good decisions and I like his quickness, turns and recovery speed determination.  His control was much tighter.

Chris Thomas (Elon) and Freddy Gomez (Guilford D3) were unable to break down the Northern Virginia defense.  Gomez was popping up all over the attack, but just wasn’t able to complete that final pass.  In the 18th minute, Gomez stole the ball from Myles McGinley (Princeton) quickly getting the ball to Lovejoy but the cross was too close to the goal keeper.

Thomas was oblivious of the defensive pressure because he didn’t turn his head in the 29th minute.

Lovejoy and Donnie Smith (Charlotte) were scorching the left side for much of the first half.   One of the better attacks in the first half started with Kevin Stam getting the ball forward to Gomez who got the ball wide to Smith who crossed the ball finding Thomas open but his header was wide.  Thomas needs to finish that chance.

Michael Chesler (High Point) made a critical stop on a laser shot from Caleb Konstanski (Indiana).

In the 67th minute, Fejiro Okiomah (High Point) foolishly retaliated against Eber Martinez after Martinez had won a hard tackle just moments before.  Coach Nicholls advised Fejiro to maintain his composure and discipline.  Fejiro is a strong, fast player who uses his body well to fend off attackers, such as in the 25th minute against Scott Mitchell. Nevertheless, Fejiro is composed on the ball.

Karo Okiomah (High Point) needs to clean up his first touch.  His speed is an asset but he must not solely rely on it.

When Sam Redmond (Wake Forest) and Martin Murphy (North Carolina) were inserted into the game in the 60th minute, the Dynamo played better, even though the goal was scored during this 1/3 of the game.

The lone goal was scored by AJ Sheta (George Mason) in the 66th minute.  The play started with a long clearance by Maurice Hughes that found Neagu’s head who flicked it accurately to Sheta who hit a cracker to the far post that Chesler had no chance to stop. 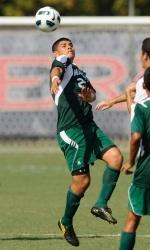 AJ Sheta
Other than the assist, Neagu was a detriment to the team.  He’s a large man that has trouble moving around the field.  At half-time, he was annoyed about the service that he was getting.  He has a point.  His teammates should be able to find him, since Neagu doesn’t move.

The primary problem with having a slow, static player up-top is that Northern Virginia was unable to generate any semblance of an attack - counter attacks were mired without options and Carolina defends well with numbers and the midfield gets back quickly.

Statistically as a team, they may be the best complainers in the PDL.

The Royals executed a sweet set piece in the 71st minute.  Neagu was fouled earning the free kick 25 yards from goal by Jonathan Campbell (high school, committed to North Carolina in 2012).  Eber Martinez ran over the ball, Neagu passed the ball centrally wide of the wall and Sheta touched the ball wide to Martinez who was 1v1 with goalkeeper Chesler.  Martinez’s shot was tipped wide by Chesler for a corner kick.

Sheta scored a nice goal, but has an inordinate appreciation of his own game.  For example in the 31st minute, Mo Hughes got the ball forward to Caleb Konstanski (Indiana) distributed the ball wide to Myles McGinley (who needed two touches to settle the ball) dropped the ball back and even wider to Sean O’Reilly.  With the sideline open and inviting, Sheta pulled up from his run and O’Reilly’s pass went uncompleted.  Worse, Sheta got mad at O’Reilly when Sheta was in the wrong.

In the 23rd minute, Sheta upended Donnie Smith near midfield and legitimately was awarded a yellow card.  Sheta kept yapping at the referee rather than acknowledging the play and getting his head back in the game.

Sheta has the body and the raw technical skills that if he continues to improve that he has a chance of a professional career.  However, he needs to mature and become a better teammate, because he won’t be the star as he continues to ascend the soccer ladder.

Eber Martinez is a tough, physical player who I was surprised was able to control himself and avoid a second yellow.  He doesn’t have sideline to sideline speed to play solo DM, professionally.  Martinez is an above-average passer and he is difficult to dispossess 1v1.

The best attacking option is Konstanski.  He is difficult to knock off the ball, he runs strong with his head up surveying the field on the run.  Konstanski has a hard shot.  He knows how to play the game.

Goalkeeper Calle Brown (Virginia) made several key stops near the end of the game with Carolina pressing.

Former Washington Diplomat player and now NOVA coach Richie Burke needs to assess his area rather than purely focusing on the ball.  In the first half, a high ball was coming toward him; he watched the ball rather than looking around his area and tripped over a bag. This made him drop his arms for balance, but he was able to head the ball.
Headlines
College Rankings HQ
View all rankings >>