A 2-0 conference-opening win over Virginia Tech keeps North Carolina at the top of the TopDrawerSoccer.com college soccer Tournament 48 National Ranking this week. 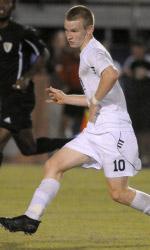 Maryland moves up a spot to #2, just ahead of Connecticut. Teams improving a number of places in the ranking include Notre Dame, Virginia, NC State, Xavier, Northwestern and SMU. Newly entered this week are San Francisco, Florida International, George Mason and Metro Atlantic berth-holder Canisius.

Meanwhile, Old Dominion’s Tim Hopkinson is our TopDrawerSoccer.com Men’s College Player of the Week after a monster offensive weekend including 4 goals and 4 assists, helping the Monarchs to a pair of wins.

The honor, along with the 11-player Team of the Week, is awarded each week after a review of match reports through DI men’s college soccer

D: Eric Miller, Creighton – Went the distance in a pair of 1-0 victories for the Blue Jays.

D: Tim Parker, St. John's – Played 180 minutes in the back as the Red Storm picked up a pair of non-conference wins.

M: Chris Ritter, Northwestern – Named MVP of the NIU adidas Invite after scored an overtime winner and adding a pair of assists as the Wildcats won twice.

F: Chris Thomas, Elon – Scored 4 goals in a pair of wins for the Phoenix.

F: Tim Hopkinson, Old Dominion – Tallied 4 goals and 4 assists as the Monarchs won a pair of games on the weekend.