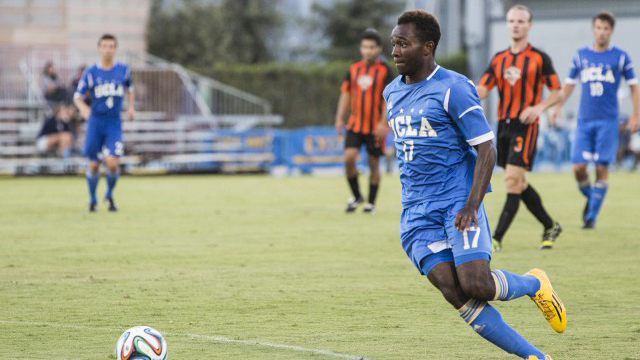 LOS ANGELES – On Thursday, UCLA and Stanford battled to a 2-2 draw in a matchup between two of the best teams in college soccer. The result is not an astonishing discovery, but who scored might be.

All four goals came from freshmen as the Pac-12 has been overrun with new talent making a mark on the season. Bruins freshman sensation Seyi Adekoya scored both goals for the home team while highly regarded recruit Corey Baird hit a brace for the Cardinal.

It’s been that type of season in the best conference in college soccer. Oregon State rookie striker Timmy Mueller leads the league in goals scored heading into November with 10. San Diego State freshman David Olsen is tied for fifth with seven. Adekoya is knocking on the door with five.

The freshman forward from Washington sits in second on UCLA in goals scored and tied for first in assists. It would have been a leap to expect this type of contribution from Adekoya in his debut season. He was not the kind of heralded prospect that normally lands in Westwood.

Salcedo referred to Adekoya as “the sleeper of the class” in February when UCLA announced its 2014 recruiting class.

“He came to our soccer camp a couple of years ago,” Salcedo said. “We got to know him and he is a very intelligent young man. He’s very humble. He has great mentality that he brings every single team. He loves the game and he wants to score goals. We saw this huge potential in him.”

It has not taken long for him to start showing that potential against college competition.

“Arriving on campus in August I was really nervous especially playing with such a great team,” Adekoya said. “I think I really improved with holding the ball up and looking for little slip passes from our midfielders and defenders like at Washington when Chase [Gasper] put a really great ball in through. I think that’s where I’ve really improved.”

Salcedo also pointed to Adekoya’s goal at Washington for a great example as how he has grown as a player.

“We wouldn’t have seen that early on in the season,” Salcedo said. “He’s really taken on what we’ve asked him to do. He wants to learn all the time and he wants to apply it to his game. We are really proud of how he approaches things. To tell you the truth, I think he is only scratching the surface of where he is going to be.”

The coaching staff speaks glowingly of the work he has put in since he has arrived on campus nearly three months ago.

“The potential he’s realized at the end of the year from his hard work and a product of the things we’ve done with him day in and day out,” Salcedo said. “We’ve cleaned up his touch a little bit. We’ve helped him with video sessions to improve his movement off the ball. We are helping him become a forward that doesn’t just use his pace.”

While Adekoya chases his potential, his UCLA teammates are starting to figure out what he can do on the field. For the freshman, he is picking up on these tendencies from his teammates too. Fellow UCLA players are learning Adekoya while he discovers their tendencies too, which is only going to make the Bruins better heading into the NCAA Tournament.

“I think I’ve really started to figure out what everyone else likes to do and how they can play in balls,” Adekoya said. “On that second goal tonight, I know Leo [Stolz] can absolutely play that ball every time.”

Adekoya is firmly in the conversation for Pac-12 Freshman of the Year with only two regular season games left, but he said he hadn’t thought about it at all. He is wired a bit differently than most freshmen athletes on campus. He said he is deciding on whether to major in neuroscience or chemistry. He has a similar methodical approach to how he looks at the game.

Mueller, Adekoya, and Olsen have put together the stats to contend for that Frehsman of the Year title, but they are not alone. Baird has come on strong in the second half of the season for Stanford and emerged as one of the key players on one of the best teams in the conference.

“He’s starting to grow in confidence,” Stanford head coach Jeremy Gunn said about Baird. “When you come into a new environment, sometimes it takes a little while to figure things out. Sometimes when you received a lot of new information, you have to take a step backward before you feel comfortable moving forward.”

Gunn pointed to Baird’s attacking talents for what him special as a player, but he wanted to turn the freshman into a well-rounded player.

“For Corey coming in, we know he is a wonderful attacking player,” Gunn said. “We said, ‘That is great but we want to make you a midfielder who can defend as well. We want you to be great for us in two ways so you want win the ball for us and attack even more.’ He is doing great. He is working hard and really enjoying the challenge.”

It’s not easy to convince a talented prospect to shift how they see the game, but Baird’s maturity has helped him embrace the role and start to see the success in recent games.

“Gifted attacking players have their attacking skills nurtured when they grow up,” Gunn said. “That great; you want them to concentrate on their gifts, but then you want to add things. All of our players are expected to be able to work both sides of the ball. They figure it out quickly.”

The Stanford team is balanced enough that it has not had to count on any one player to carry the success of the team, but it still presents an opportunity for talent to shine. Baird has seized the limelight lately, but fellow freshman Tomas Hilliard-Arce has been tremendous as well in his debut season.

“You can feel pretty good about the four-year projection of a player, but you can never be positive for how quickly a player settles in his freshman year,” Gunn said. “[Hilliard-Arce] has come in and done amazing.”

The former Charlotte Soccer Academy standout has transitioned from a center midfield role at the club lever to a center back at the college level. It’s difficult to tell that he is new to the position.

When he does get in the attack on set pieces, he is the most dangerous player for the Cardinal. He is one of the best players in college soccer in creating space and earning open looks on goal.

“We encourage him to play to his strengths,” Gunn said. “We will get him isolated in the box some of the times. We try to make situations for him. You learn as a coach on attacking corners that you can spend forever talking about movement but it doesn’t mean a thing. You put a good ball in and you put a guy in there who wants to win and you have a good chance. Austin [Meyer] has put some good deliveries in and Tomas [Hilliard-Arce] is desperate to head it.”

Hilliard-Arce is one of a few Pac-12 freshman defenders who have stepped in and done well. California standout Joshua Morton, UCLA left back Chase Gasper, and Washington outside back Justin Fiddes have all been exceptional as well.

In a conference packed with next level talent, freshmen have quickly made their mark.