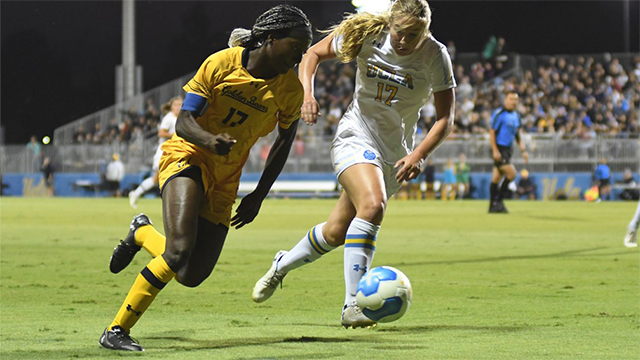 The first week of conference play is in the books, and the Pac-12 showed why it is the most competitive league in the country. Five of the six games were decided by one goal; the other ended in a draw.

Here’s a look at the standings along with a recap of last weekend’s action.

Taylor Kornieck converted a penalty kick in the 107th minute to lift Colorado to a big road win over Arizona. The senior also netted a free kick from 20 yards out in the 39th minute to tie things at 1-all after the Wildcats grabbed an early lead.

It otherwise was a defensive battle in Tucson in which the visiting Buffaloes outshot Arizona 17-11. The Wildcats scored in the sixth minute when Colorado knocked a corner kick into their own net.

Freshman goalkeeper Hope Hisey stopped a career six shots to keep Arizona in it, but ultimately Kornieck was too much to handle.

Up next: Arizona hosts UCLA and USC. Colorado hosts Oregon and Oregon State.

Tatum Barton draws a foul and @taylorkornieck delivers on the free kick!

Oregon State’s turnaround has been one of the best stories in college soccer this season, but the Beavers’ luck finally ran out after a late surge by the Cougars on a cold, rainy night in Pullman.

McKenzie Weinert's seventh goal of the season gave OSU a 1-0 lead in the 30th minute, but Averie Collins tied it the 67th minute with a penalty kick, and five minutes later Morgan Weaver made a run inside the box and sank an angled shot for the game-winner.

Cal’s renaissance continued when the Golden Bears knocked off the Bruins 2-1 in Westwood.

Cal’s Luca Deza and UCLA’s Marley Canales (PK) scored within the first 11 minutes of the match, setting the stage for Kailee Gifford’s game-winner in the 88th minute.

Abi Kim picked up her career-fourth assist. She rounded the corner and rolled a pass to the top of the box. Gifford stepped up and buried the shot with her left for her first goal of the season. It was a feel-good moment for the redshirt sophomore, who missed all of 2018 with an injury.

UCLA owned a 17-8 shot differential but only put four of them on frame. The Bears have been stingy on defense all season, allowing just four goals in 10 games, the best goals-against average in the conference.

Up next: Cal hosts Washington and Washington State. UCLA plays at Arizona and Arizona State.

A top-3 matchup lived up to its billing, as Catarina Macario scored two unanswered goals to lead the Cardinal to victory in a 3-2 thriller over the Trojans in Los Angeles. All five goals were scored in a back-and-forth first half.

Stanford’s Madison Haley started the scoring in the 15th minute by heading a free kick from Macario. USC responded in the 21st and 23rd minutes to take a lead that lasted all of 15 minutes.

Kiara Pickett centered a pass to Macario, who tucked a low liner inside the far post for her 12th goal of the season, four more than any other player in the Pac-12.

Up next: Stanford hosts Washington State and Washington. USC plays at Arizona State and Arizona.

Aleea Gwerder netted a penalty kick in the 76th minute to help the Utes escape with a 2-2 draw in Tempe.

After Utah’s Courtney Talbot (16th minute) and ASU’s Alexia Delgado (24th minute) one-timed crosses to make it 1-1 early on, Marleen Schimmer put the Devils ahead in the 63rd minute by lasering a shot from well within the 18 past Utah keeper Carly Nelson after a nice drop off from Dai Williams.

But a handball in the box allowed Gwerder to step up to the spot and notch the equalizer.

The Sun Devils have just one win in their last five matches, somewhat spoiling a 5-0 start. The Utes, who began the year 0-2, extended their unbeaten streak to five games.

Up next: Utah hosts Oregon State and Oregon. ASU hosts USC and UCLA.

Washington holds off Oregon in Seattle

The Huskies picked up its third straight win with a 2-1 victory over Oregon, whose six-game unbeaten streak was snapped.

Vanessa Millsaps scored a beautiful goal from distance to give the Huskies a lead late in the first half, and they added to it in the 48th minute when Summer Yates intercepted a pass, drew the keeper out, and centered a pass to Kennedy Smith who floated a shot off the crossbar and in.

A few minutes later, Emma Eddy headed in a long ball to bring the Ducks within one—her team-best sixth goal of the season—but it was one of just three shots Oregon would produce all second half.

UW’s Siena Ruelas made a diving save on a header in the 69th minute to close things out.