The Stanford Cardinal enters 2012 in an unfamiliar place. It is finally the hunted.

After getting over the hump and claiming the program’s first NCAA Division I women’s soccer championship in 2011, Stanford assumes a new role this fall as the titleholders.

Will the shiny piece of hardware in Palo Alto change anything about the team? The Stanford coaching staff makes it sound like it is business as usual.

“I definitely don’t worry about complacency,” Stanford head coach Paul Ratcliffe told TopDrawerSoccer.com earlier this year. “The team is always hungry. We are really proud that we accomplished that, but for me, you are only as good as your last game.”

The last game has mainly been a win for Stanford over the past few years, and especially in Pac-12 play where Ratcliffe’s side is entering this season with a 31-game winning streak.

A fairly ridiculous run of form when considering the opposition is normally strong as well.

UCLA’s head coach B.J. Snow would love to put an end to that streak and Stanford’s stranglehold of the Pac-12. Snow’s Bruins are talented enough to make it happen, but actually getting that monkey off the back is much more difficult.

On paper though, the Pac-12 figures to be a two-team race with Stanford clearly the favorite – the Cardinal claimed 10 of the first place votes in the conference’s preseason poll – but California and Oregon State are no pushovers. 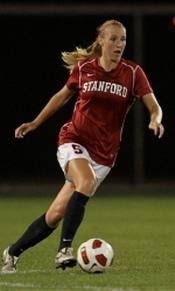 Stanford kicked of the first exhibition contest of the season on Friday with a 2-0 win over Fresno State. The result was not unexpected, but the Cardinal lineup did raise some eyebrows. Due to injuries, graduation, and national team duties, the Cardinal only had three starters from last year’s College Cup team.

That is a substantial turnover for one program. Luckily for Ratcliffe, he has talent waiting in the wings to get the call.

Haley Rosen, who the coaching staff has been high on in the past, is finally back from an injury that ended her freshman season. Rosen scored against the Bulldogs to get her season off to a resounding start.

The Bruins are dealing with similar difficulties in the sense that the U20 Women’s World Cup is disrupting the start of the college season. Samantha ‘Lone Ranger’ Mewis is off with Sarah Killion in Japan for the next month and the rest of the team will need to step up in their absence.

Along with replacing those two as they adventure in Japan, Snow will need to find someone to duplicate Sydney Leroux’s goal production from 2011.

Two nearly impossible tasks to look forward to and only three days remain until the season opener on the road against UCONN(w). It could be a stressful week in Westwood.

And the ongoing theme of this piece continues. The Beavers are in the worst spot of the top three teams though, as Oregon State does not have the same talent to replace stars off at national team duty.

Canadian Jenna Richardson, who was fantastic during the CONCACAF U20 Championships earlier this year, is also off in Japan during the first few weeks of the season.

Unfortunately, head coach Linus Rhode can't lean on Chelsea Buckland to lead the way after she suffered a knee injury on national team duty during the offseason. Buckland led the team in scoring last season with 11 goals and four assists.

*Update: Buckland injured her ACL in June and will miss this season.

Matt Potter was an excellent coach for Washington State over the last few years, but now he is gone to Oklahoma and the Cougars must build off what he started in Pullman.

Potter’s success on the field translated into good recruiting classes so new head coach Keidane McAlphine has some talented pieces to work with in 2012.

Senior forward Brandi Vega and sophomore midfielder Nicole Setterlund are at the top of the list and both names to look out for in Pac-12 play.

The Utes started the preseason with a 0-1 loss to Texas Tech on the road on Saturday. While reading too much into preseason results is silly, only registering two shots on goal during a game has to raise some flags with the coaching staff.

Fellow Pac-12 coaches are expecting a down year for Utah, as evidenced in the preseason conference poll that predicted Rich Manning’s squad would finish eighth. That seems harsh given the amount of starters back from last season, eight.

Courtesy the California Golden Bears press release, the conference preseason poll prediction of third is the highest since 2007.

The ranking does appear a touch high given the amount of talent California lost from last year’s team. However, head coach Neil McGuire has been bringing in some very good recruiting classes recently and should have the pieces to stay in the mix in the Pac-12.

The highlight of the 2012 Huskies season is the clash against Notre Dame in Seattle on September 9. It is going to be a tough fixture for Lesle Gallimore’s side, but these are the games that harden a team for postseason success.

Keep an eye on local star Lindsay Elston who has been one of the standouts for the Huskies over the past two years. Elston could really do some damage in the conference in her junior campaign.

Freshman Carli Farquharson was unstoppable last year in the ECNL for SC del Sol U18. The forward notched 26 goals in 20 games. Sun Devil fans should be ecstatic she landed at Arizona State, and also hopeful that her form continues on in the college game.

After only scoring 12 goals in 11 conference games last year, the Sun Devils need the boost up front to make this squad consistently dangerous in close games.

To put it lightly, there will be some inexperienced players in big game situations for the Ladies of Troy this year.

The youthful exuberance did not hurt USC in its preseason opener against Cal Poly over the weekend though. USC cruised to a 3-0 win. Freshman Whitney Pitalo scored one goal and assisted on another in her unofficial debut.

The Ducks return a number of players from last year’s squad including two players to watch in Scout Libke and Bri Pugh.

The second game of the season at Portland will be a real challenge for Oregon. The Pilots on home turf are nearly impossible to beat.

Danny Sanchez is the man in charge in Boulder now after a successful stint with Wyoming. Sanchez takes over a program that struggled in its first season in the conference, but he is a young coach who is not one to shy away from a challenge.

This fall may not be the dream year for Sanchez and his squad, but he knows how to build a program.

Last fall was rough for the Wildcats. There is no easy way to sugarcoat that type of season. But bringing in 10 new players for 2012 should change the identity of this team this season, and perhaps shake off the stink of that losing year.